Ankara has spoken out against a new oil agreement between an American-based company and the Kurdish-led Autonomous Administration of North and East Syria. 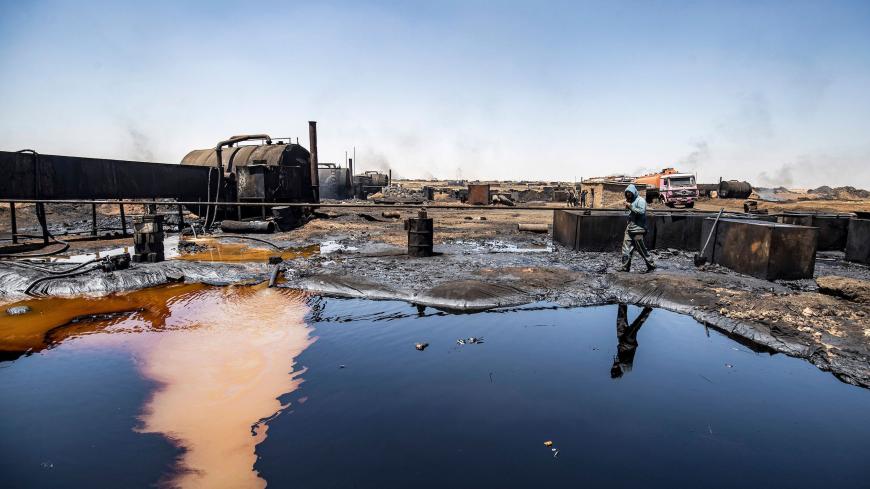 A man walks at a makeshift refinery using burners to distill crude oil in the village of Bishiriya in the countryside near the town of Qahtaniya west of Rumaylan (Rmeilan) in Syria's Kurdish-controlled northeastern Hasakah province, on July 19, 2020. - DELIL SOULEIMAN/AFP via Getty Images

Turkey condemned a new oil agreement between an American-based company and the Kurdish-led Autonomous Administration of North and East Syria, according to a release Monday by the country’s Foreign Ministry. Turkey now joins Syria in criticizing the deal after a Syrian state media announcement on Sunday by the country’s Foreign Ministry called the deal illegal and accused the agreement of stealing Syria’s crude.

The oil deal — as first reported by Al-Monitor — was signed with Delta Crescent Energy LLC, a corporation in the state of Delaware. Sources with close knowledge of the deal told Al-Monitor’s Amberin Zaman that the agreement was made “with the knowledge and encouragement of the White House.” The region is not officially recognized as autonomous by any international state.

Turkey’s condemnation of the deal arrives only days after US Senator Lindsey Graham, R-S.C., spoke to Syrian Democratic Forces (SDF) Commander in Chief Mazlum Kobane to confirm the deal had taken place. The US-backed SDF is the largely Kurdish military force in the region.

Graham and US Secretary of State Mike Pompeo referred to the oil deal during a Senate Foreign Relations Committee hearing on July 30.

Turkey said they deeply regretted the US support that disregards international law and violates territorial integrity. The efforts are considered within the scope of financing terrorism, the ministry claimed.

The deal comes amid increasing US sanctions against Syria. A new wave of sanctions were imposed in July under the Caesar Act, legislation that sanctions the Syrian government, including Syrian President Bashar al-Assad and some members of his family, for alleged war crimes against the Syrian population.

The agreement is to market oil in the territory controlled by the SDF and develop and modernize existing fields. The US government has also agreed to provide two modular refineries to the autonomous region's administration. Delivery of the refineries, however, may be impeded due to the coronavirus pandemic, sources told Al-Monitor.