Sources told Al-Monitor the agreement to market oil in territory controlled by the US-backed Syrian Democratic Forces was signed “with the knowledge and encouragement of the White House.” 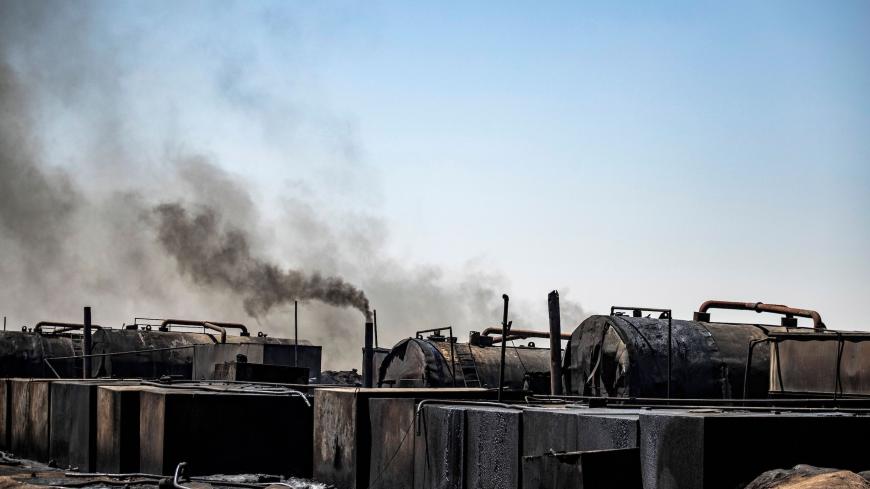 This picture taken on July 19, 2020 shows a general view of a makeshift refinery using burners to distill crude oil in the village of Bishiriya in the countryside near the town of Qahtaniya west of Rumaylan (Rmeilan) in Syria's Kurdish-controlled northeastern Hasakeh province. - DELIL SOULEIMAN/AFP via Getty Images

The Kurdish-led Autonomous Administration of Northeast Syria has signed an agreement with an American oil company, well-placed sources with close knowledge of the deal told Al-Monitor. One of the sources said the agreement to market oil in territory controlled by the US-backed entity and to develop and modernize existing fields was inked last week “with the knowledge and encouragement of the White House.” The sources named the company as Delta Crescent Energy LLC, a corporation organized under the laws of the state of Delaware. The sources gave no further details about the company but would only say they had been in talks for “a long time” and that it had received an OFAC license to operate in Syria.

Sinam Mohamad, the Syrian Democratic Council representative to the United States, confirmed via Whatsapp that Delta Crescent had signed an agreement with the autonomous administration but said she had no further details.

Oil is the autonomous administration's principal source of income.

The sources briefing Al-Monitor confirmed that Lindsay Graham, the Republican senator from South Carolina who is close to President Donald Trump, had spoken to Mazloum Kobani, the commander in chief of the Syrian Democratic Forces (SDF) yesterday and that Kobani had informed Graham of the deal and asked him to relay details of it to the US president.

Graham confirmed that he had heard about the oil agreement from Kobane to CBS reporter Christina Ruffini, who then relayed this in a tweet.

During his testimony to the Senate Foreign Relations Committee today, Secretary of State Mike Pompeo told Graham he was “OK” with the deal. “The deal took a little longer senator, than we had hoped, and now we’re in implementation," he said.

The sources told Al-Monitor that the US government had also agreed to provide two modular refineries to the autonomous administration but that these would only meet 20% of its refining needs. Delivery of the refineries have been held up by logistical hitches related to the COVID-19 pandemic, the sources said.

The Kurdish-led entity controls most of Syria’s oil wealth, which is concentrated in and around the Rmelain fields close to the Turkish and Iraqi borders and in the Al-Omar fields further south. Before Syria’s civil conflict erupted in 2011, the country used to produce around 380,000 barrels of crude per day. Production is down to around 60,000 barrels per day, much of it refined in makeshift refineries and transported by leaky pipelines causing massive environmental pollution.

Oil is a politically radioactive topic, with the central government in Damascus accusing the United States of stealing its oil after Trump declared last year in the wake of Turkey’s October incursion against the SDF that he was keeping some 500 US Special Forces in the Kurdish governed space “for the oil.” Despite steadily tightening sanctions on the regime of President Bashar al-Assad, the United States has turned a blind eye to ongoing oil trade between the Kurds and Damascus. A fair amount of the oil is also sold at cut rate prices to the Kurdistan region of Iraq.

Ankara is every bit as sensitive about the oil as it's seen as the vehicle for cementing the Syrian Kurds’ self-rule project. Turkey has since 2016 been launching military operations against the SDF to disrupt its perceived attempts to establish a contiguous zone of control from the Iraqi border all the way to Afrin to the west of the Euphrates river and beyond. Turkey claims the SDF and its affiliates are "terrorists" because of their links to the outlawed Kurdistan Workers' Party, the rebel group that has been fighting for Kurdish self rule inside Turkey since 1984 and is on the State Department's list of terrorist organizations.

The sources said US Special Envoy for Syria engagement reportedly had informed Turkey about the oil deal and that Ankara had not reacted negatively. Russia was also informed and had not expressed a view, though certain fields were kept outside the deal, so as to ensure that the Syrian people outside the Kurdish zone were “not deprived of their share of the oil,” one of the sources said.