An Egyptian intelligence delegation embarked on new moves between Israel and Hamas in order to reduce tension on both sides of the borders in the Gaza Strip after the situation escalated over the past few days. 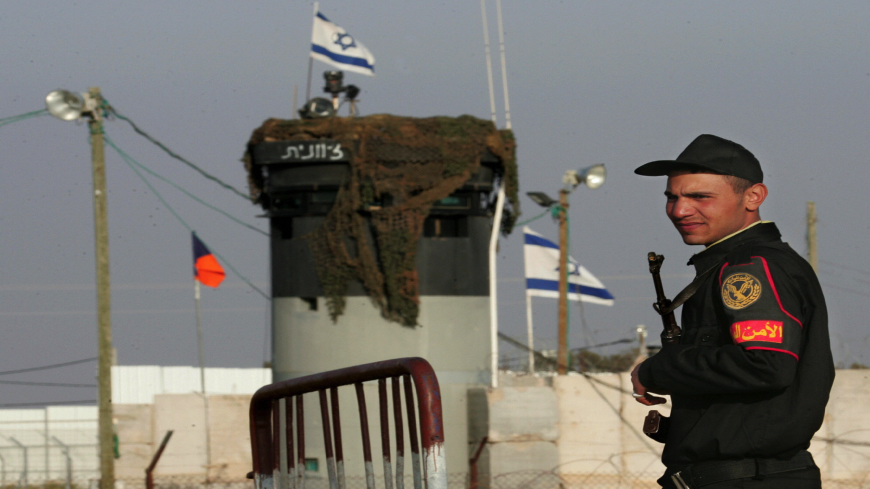 An Egyptian border policeman stands to guard close to Israeli tower guarding the Karem Shalom gate leading to Israel from the Philadelphi corridor, a buffer zone that separates Egypt from Israel and the Palestinian Gaza Strip. - CRIS BOURONCLE/AFP via Getty Images

GAZA CITY, Gaza Strip — Egypt is taking new steps in the Gaza Strip in a bid to reduce the tension that has recently escalated between Israel and Hamas, after Palestinian groups resumed the launching of incendiary balloons toward southern Israel on Aug. 6 following a two-month hiatus.

Israel responded to the fires ravaging the fields of southern Israel by bombing numerous Hamas military sites in Gaza. It partially closed the Kerem Shalom crossing on Aug. 11 and prevented the entry of construction materials and fuel derivatives into the Gaza Strip. This led Gaza’s sole power plant to shut down on Aug. 18. Also, Palestinian fishermen were completely prevented from accessing the sea off the Gaza Strip on Aug. 16.

The escalation came after Hamas accused Israel of delaying the implementation of the truce understandings that were reached in October 2018. The understandings were aimed at easing the blockade and stipulated establishing two industrial zones east of Gaza City to accommodate tens of thousands of unemployed. Electricity and water projects were supposed to be implemented as part of the truce agreements, as well as projects aimed at increasing the volume of imports and exports to and from the Gaza Strip.

In this context, an Egyptian security delegation arrived in the Gaza Strip on Aug. 17, headed by Ahmed Abdel Khaleq, who is in charge of the Palestinian portfolio in Egypt’s General Intelligence Service. The delegation met for several hours with leaders of the Hamas movement in Gaza before leaving for Israel on the same day to convey the movement’s demands. It was set to return to Gaza on Aug. 18 with answers, but the visit was delayed to an unspecified date, as Israel rejected most of Hamas’ demands.

A Hamas official familiar with the talks told Al-Monitor on condition of anonymity that the movement asked the Egyptian delegation to pressure Israel into implementing the understandings previously reached and to immediately start implementing projects related to electricity, water and the two industrial zones east of Gaza City. The source added that the movement will not put an end to the tension on the border with Israel before the latter responds to the demands it received through the Egyptian delegation.

The official explained that they do not seek military confrontation, but they do not fear it if Israel refuses to implement those demands.

He revealed that Qatar has agreed to extend the financial grant to the Gaza Strip until the end of 2020, and he pointed out that the movement demands that the grant be extended until the end of 2021, while including 200,000 families — instead of 100,000, as it has in previous months — due to the increase in the number of poor families in the Gaza Strip as a result of the Israeli blockade and the coronavirus pandemic.

The Israeli newspaper Yedioth Ahronoth reported Aug. 17 that the demands Hamas raised to Israel through the Egyptian delegation are very high, and the chances of reaching an agreement between Israel and Hamas are still weak, as evidenced by the continued launching of incendiary balloons toward southern Israel during and after the Egyptian delegation’s visit to the Gaza Strip.

Israeli Defense Minister and alternate Prime Minister Benny Gantz warned Hamas on Aug. 18 about the continued launching of fire balloons from Gaza into southern Israel, saying, “Hamas is playing with fire, and I will make sure it turns on them.”

An Egyptian parliamentarian close to the Egyptian intelligence service told Al-Monitor on condition of anonymity, “It is true that the demands of Hamas, which the delegation received on Aug 17, are high, but they come within what has been agreed upon with Israel in the previous months.” He expected a new agreement to be achieved during the next few days, as none of the two sides wants to reach military escalation.

The Egyptian parliamentarian stressed that the intelligence delegation is currently trying to converge views between the two sides in the hopes of swiftly restoring calm to the border between Gaza and Israel. The delegation, according to the source, is also seeking to ease the measures taken by Israel after the recent escalation — which included the closure of the Kerem Shalom crossing and prevented the entry of some goods — by allowing the refueling of the Gaza power plant and allowing fishermen to fish.

Spokesperson for the Ministry of Health in Gaza Ashraf al-Qidra told Al-Monitor that a health disaster is looming for patients in the Gaza Strip if fuel is not promptly supplied to the power plant. He indicated that the serious repercussions of the electricity outage threaten patients in intensive care units, operating rooms and quarantine rooms.

For its part, Israel attributes the delay in implementing what was agreed upon with Hamas in October 2018 to the difficulty of holding meetings with international officials with the aim of implementing major projects in the Gaza Strip related to electricity, water and industrial areas specifically, due to the coronavirus pandemic.

Mustafa al-Sawaf, a political analyst and former editor-in-chief of the local Felesteen newspaper, told Al-Monitor that the success of the Egyptian delegation’s mission in reducing tensions between Hamas and Israel depends on the delegation’s ability to pressure Israel into achieving progress as far as the truce understandings are concerned.

Sawaf expected the delegation to succeed in obtaining positive answers to some, not all of the demands that Hamas raised to Israel, considering that the task of the Egyptian delegation is not easy after Israel has repeatedly backed down on its pledges.