Egypt casts about for ways to protect fisheries from GERD effects

Egypt is concerned Addis Ababa’s controversial dam on the Blue Nile will harm its fish resources and is pursuing ambitious projects to protect the national resource. 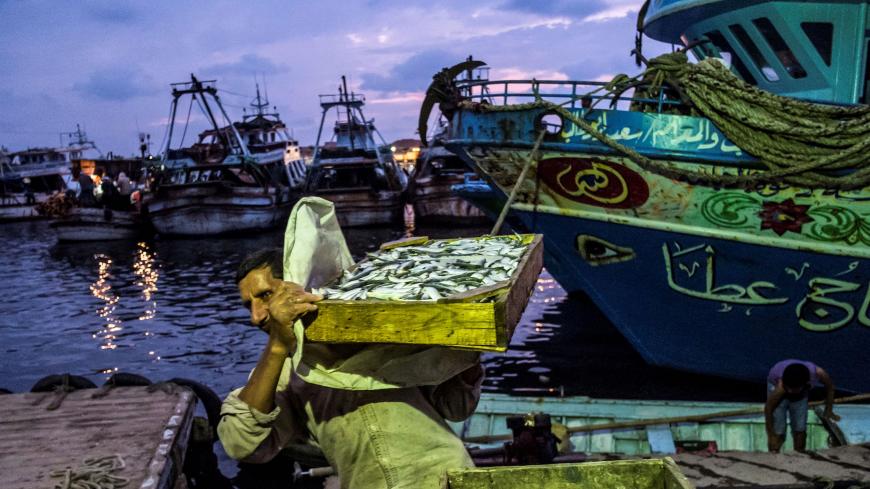 A worker unloads freshly caught fish off a fishing boat at a pier in the Egyptian town of Ezbet al-Borg along the Nile river delta's Damietta branch near the estuary into the Mediterranean sea, in the northern governorate of Damietta, Oct. 22, 2019. - KHALED DESOUKI/AFP via Getty Images

Water scarcity is not the only danger Egypt fears from the Grand Ethiopian Renaissance Dam (GERD). Egypt and Sudan are both concerned the GERD will undermine their agricultural sector and affect their food security. The African Union-sponsored talks on the GERD were suspended earlier this month.

A study published in July by the Egyptian Institute of National Planning indicated that 12 fish species endemic to the Nile River, lakes and fish farms in Egypt could become scarce or even extinct due to the GERD.

The study, titled “The potential implications of the GERD on fish production in Egypt and means of mitigating its effects,” found that the fish production in Lake Nasser, the Nile River and its tributaries and other waterways and freshwater fisheries is threatened by the GERD.

Former Egyptian Minister of Irrigation Mohammed Nasr Allam told Al-Monitor that the GERD will greatly affect Egypt and regional stability in general. He explained that it will turn large Egyptian agricultural areas into wastelands, decrease the groundwater, cause seawater to flow into the Nile Delta and increase pollution of the Nile, canals and drains.

Ethiopia claims the massive multi-billion-dollar dam is crucial to its economic development and will provide much-needed electricity to Ethiopia's 110 million people, half of whom currently live without it.

Allam expressed doubt that the main goal of constructing the dam was development or supplying the Ethiopian people with electricity. He noted that the dam is located in a border area far from Ethiopian cities and villages and that the cost of transmission and distribution of electricity will exceed its production cost.

In a phone call with Al-Monitor, Ahmed Abdel-Wahab Barania, a professor of economics and fish resources development at the Institute of National Planning's Environmental Planning and Development Center, clarified the potential repercussions of the GERD on the fish stock in Egypt. He explained that fish resources are dependent on the quantity and quality of water available in bodies of water, including fish farms. “With the decrease in the water level and the increase in salinity, a change in Egypt’s fish stock map is expected,” he warned. “Species will disappear either due to the insufficiency or high salinity of the water.”

“The impact will appear five years from now on the prices of meat and poultry, due to the expected decrease in fish production,” Barania said. “Twelve species of fish endemic to the Nile River, lakes and fish farms, in addition to freshwater crayfish, could become scarce or extinct.”

He explained that five freshwater crayfish factories currently operate in Egypt, with investments exceeding $31 million. They provide jobs for thousands of workers, he explained. Egypt exports crawfish to Europe, China and the United States, at a value of $32 million a year.

Khaled Ahmed al-Sayed, head of General Authority for Fish Resources Development, told Al-Monitor the authority is currently working to double the production of fish farms. He noted that Egypt is the sixth largest aquaculture producer in the world, and fish farming currently makes up 80% of total production at 1.9 million tons annually.

Sayed said agreements are in place between the ministries of agriculture and irrigation to begin issuing licenses on a large scale to establish what are called integrative farms that depend on groundwater in desert areas, then use the water fertilized with fish excrement to grow plants.

Egypt has been working to expand the industry. Fish farms were established in Port Said on an area of ​​19,000 feddans and an area of 4,000 feddans in Kafr el-Sheikh. These farms produce freshwater fish, most notably of tilapia and shrimp.

Sayed said his organization is currently working to promote the use of aquaculture cages in the Red and Mediterranean seas in cooperation with Tunisia, Egypt's Ministry of Environment and in coordination with the Egyptian Armed Forces.

He said that Tunisia has extensive experience with aquaculture cages. “Experts from Tunisia came to Egypt to cooperate on this project. A team from the authority visited Tunisia to learn more about the latest technologies in this field. This project will be implemented first in the Sharq el-Tafriaa project in the Mediterranean.”