The United States today called on Turkey to release Osman Kavala, a Turkish businessman and philanthropist who has spent 1,000 days in detention despite widespread condemnation from human rights organizations. 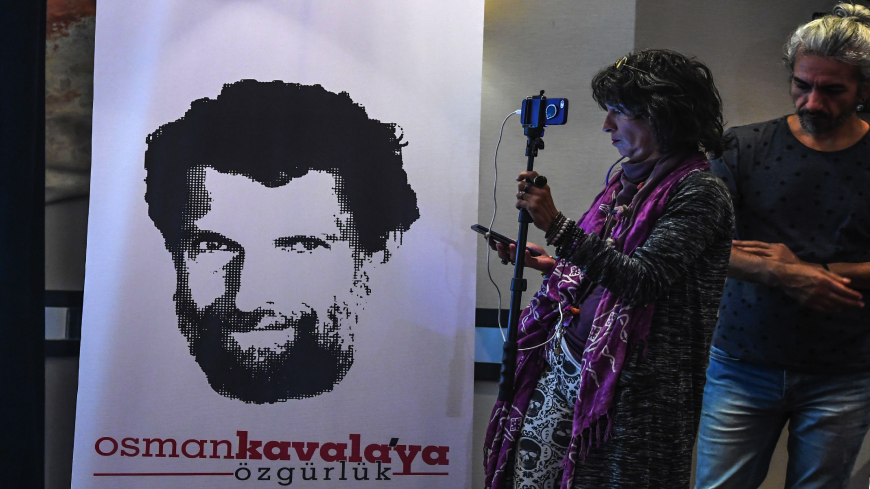 A journalist stands in front of a poster featuring jailed businessman and philanthropist Osman Kavala during a press conference of his lawyers on October 31, 2018. Kavala was arrested a year ago by Turkish authorities and has still not been charged with an offense. - OZAN KOSE/AFP via Getty Images

Washington today called on Turkey to release Osman Kavala, a Turkish businessman and philanthropist who has spent 1,000 days in detention despite widespread condemnation from human rights organizations.

“The United States underscores the importance of respecting international obligations and commitments,” State Department Spokesperson Cale Brown said in a statement. “We call upon Turkey to comply with its own commitment to justice and rule of law and to release Osman Kavala from detention, while pursuing a just, transparent and speedy resolution to his case.”

Why it matters:  Amnesty International and several other human rights groups have launched an online campaign calling for Kavala’s release under the hashtag #CrimeNotFound. Kavala was first accused of supporting the anti-government Gezi Park protests and arrested in 2013. The European Court of Human Rights last year ruled his detention without a trial was a violation of human rights law. While he finally received a trial and was acquitted in February, he was not released and now faces espionage charges. Ankara now claims he helped support the 2016 coup attempt against President Recep Tayyip Erdogan, even though he was in prison at the time.

What’s next:  It remains to be seen whether Ankara will yield to international pressure and release Kavala. For now, he remains incarcerated in Turkey’s Silivri prison.

Know more:  Diego Cupolo has the full story on the campaign to release Kavala.