As clashes fare between Armenia and Azerbaijan, Ankara has warned Yerevan that Turkey will not let aggression against its ethnic Turkic kin go unpunished. 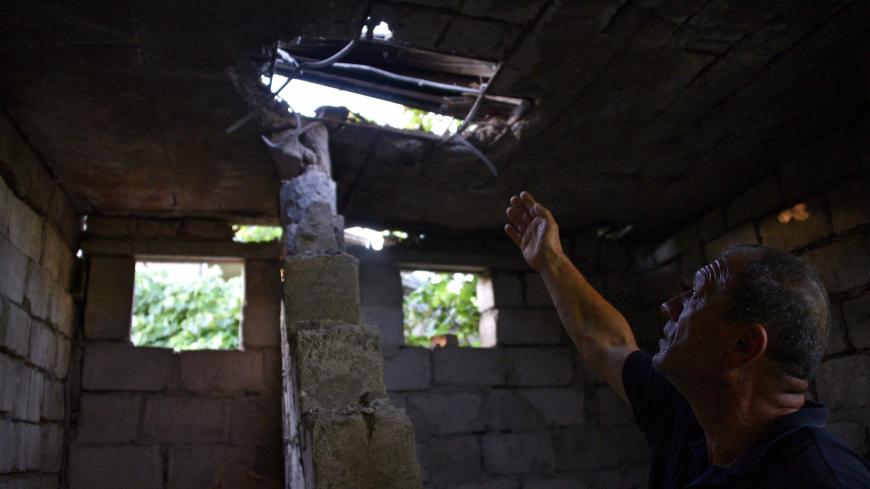 Hrachik Pogosyan points at the roof of his house in the village of Aygepar in Tavush region damaged by recent shelling during armed clashes on the Armenian-Azerbaijani border on July 15, 2020.

Turkey warned its eastern neighbor Armenia today that it would bear the consequences for its attacks against its ethnic Turkic kin in Azerbaijan that have killed 16 people on both sides since border clashes flared up between the former Soviet states on July 12.

At least 11 of them were Azerbaijanis, including a major general and a colonel in the country's defense forces. It was the worst outbreak of hostilities since April 2016, when scores were killed in four days of fighting.

“The pain of the Azerbaijani Turk is our pain. We want you to know that any kind of difficulties that you feel there [in Azerbaijan] are felt here [in Turkey] very deeply. The blood of our Azerbaijani brothers will not remain unavenged,” Akar added.

Clashes between the sides in the Tavush region resumed today after a brief pause. A spokesperson for Armenia's Defense Ministry, Sushan Stepanyan, said Azerbaijani forces were shelling Armenian villages with mortars and howitzers and using Azerbaijani villagers in the hilly region as “human shields.” Azerbaijan blamed Armenia for today’s attacks.

Azerbaijan and Armenia have been locked in a bitter dispute over the predominantly Armenian enclave of Nagorno-Karabakh since the collapse of the Soviet Union in 1991. The mountainous region fell to Armenia, which was backed by Iran. Turkey backed Azerbaijan while Russia supplied weapons to both sides. Turkey has kept its borders with Armenia sealed and has no diplomatic relations with Yerevan. Years of mediation by the Organization for Security and Cooperation in Europe to end the conflict have failed. Russia has called for an immediate cease-fire and Kremlin spokesperson Dmitry Peskov said Tuesday that Moscow was “deeply worried” about the fighting. On Wednesday, US Secretary of State Mike Pompeo called for “an immediate de-escalation” and resumption of the peace talks.

The steady stream of hawkish comments from Ankara have prompted fevered speculation that a newly assertive Turkey, which has been flexing its muscles in Syria and Libya, might intervene on the side of Azerbaijan again. Erdogan and Aliyev have very close ties that are greased by a web of energy deals. The recent arrest of Turkish Azeri oil billionaire Mubariz Mansimov Gurbanoglu, who has been indicted on dubious terror charges by a Turkish court, is thought to be linked to his falling out with Aliyev and Azerbaijan’s state oil company, SOCAR.

Getting tough with Armenia also plays to Erdogan’s nationalist base as he seeks to revive his sagging poll numbers amid the country’s worst economic downturn since his Justice and Development Party came to power 18 years ago.

Garo Paylan, an ethnic Armenian member of the Turkish Parliament, told Al-Monitor in an interview this week, “Turkey is engulfed in a nationalist wave that harks back to the days of Talat and Enver Pasha.” Paylan was referring to the so-called Young Turk leaders who recklessly plunged Turkey into the First World War on the side of the Axis powers. Talat is regarded as one of the chief architects of the genocide of over a million Ottoman Armenians in 1915.

The prevailing consensus among analysts is, however, that Turkey has no interest in another hot war on its borders. Thomas de Waal, a senior fellow at Carnegie Europe and the author of "Black Garden," one of the most authoritative books on the Karabakh conflict, told Al-Monitor that while Erdogan is “interested in exploiting any situation he can, [he] is more interested in a war of words than a war of guns” and that “Azerbaijan doesn’t really want a war either.”

“I don’t believe that Turkey will intervene militarily,” he told Al-Monitor in a telephone interview from Baku. “There is already military cooperation between Turkey and Azerbaijan. What Azerbaijan expects from Turkey is its continued diplomatic support on the world stage.”

Moreover, while Karabakh stirs nationalist passions in both Azerbaijan and Turkey, the recent spate of clashes is taking place on the largely uncontested international border between Armenia and Azerbaijan. When some 30,000 Azerbaijani demonstrators took to the streets in Baku Tuesday, the largest protest of its kind, they were demanding the government take action in Karabakh.

In any case, contends Ozgur Unluhisarcikli, Turkey director for the German Marshall Fund of the United States, “The Caucasus is Russia’s backyard and Turkey is unlikely to cross Moscow there in the way it does sometimes in Syria and now in Libya," he told Al-Monitor.

That isn’t to say that things couldn’t escalate. De Waal said, “I am not expecting a massive war like we had in the 1990s but we could have a chain reaction that could take us back to April 2016.” It will not have helped that Aliyev sacked his foreign minister of 14 years, Elmar Mammadyarov, today, accusing him of slacking on the job. “He has an institutional memory [of peace talks]. He’s a source of continuity, not of policy," De Waal observed. “Aliyev feels besieged and blaming the foreign minister is implausible. It’s a signal that he’s almost giving up on negotiations.” If true, Ankara retains enough influence to change his mind.