While Turkey has prided itself for mediating between Russia and Ukraine, Ankara has shown no such impartiality in the recent fighting between Azerbaijan and Armenia, with Turkish leaders airing their support for Baku. 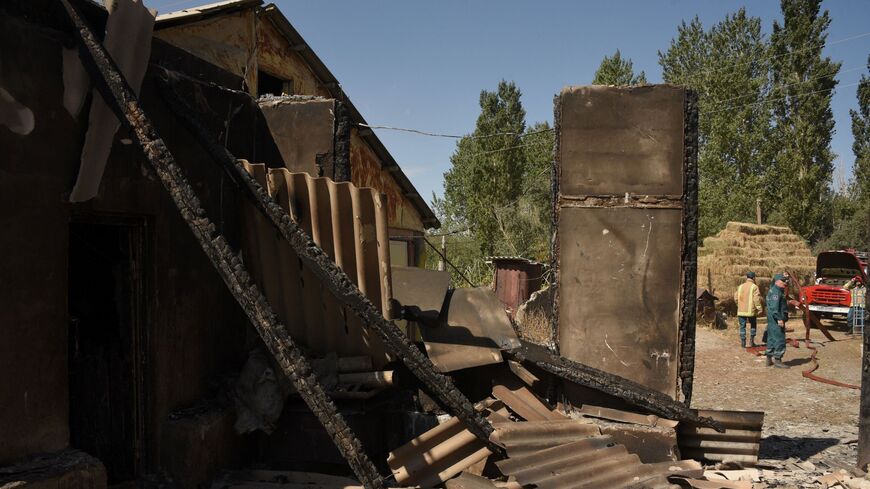 Firefighters work among the ruins of a house which was said to be hit by Azeri shelling during recent border clashes with Azerbaijan in the settlement of Sotk, Armenia, on Sept. 14, 2022. - KAREN MINASYAN/AFP via Getty Images

Turkish killer drones were back in action Wednesday as its ally Azerbaijan kept up attacks against Armenia for a second day, sparking fears of full-blown conflict between the historic foes that might draw in Russia and Turkey as well.

Turkey, which prides itself for mediating between Russia and Ukraine, displayed no such impartiality as Turkish leaders aired their support for Azerbaijan.

“We find the situation we are in — which is the result of violations by Armenia of the deal reached after the war ended in Azerbaijan’s victory— as unacceptable,” Turkey’s President Recep Tayyip Erdogan said today. Erdogan was referring to the brief and bloody war between Armenia and Azerbaijan in 2020, which ended in the former's defeat. It was the second time the countries went to war since gaining independence from the Soviet Union. The 44-day conflict ended in November after a Kremlin-brokered truce, which saw around 2,000 Russian peacekeepers deployed for the first time in the disputed Nagorno-Karabakh enclave.

“This will, naturally, have consequences for Armenia, which did not fulfil the agreement’s conditions and constantly displayed an aggressive attitude,” Erdogan warned.

In 2020, Turkey played a pivotal role along with Israel in helping Turkic Azerbaijan wrest back huge swaths of territory around the Nagorno-Karabakh enclave that were occupied by Armenia in the first war that raged from 1991 to 1994. Azerbaijan released footage today showing Turkish TB2 Bayraktar drones attacking Armenian targets yet again.

Erdogan’s informal coalition ally, Devlet Bahceli, who leads the Far-Right Nationalist Movement Party, used even stronger language. “Armenian gangs are accelerating their rapacious attacks and engaging in treacherous and bloody provocations. Our dear Azerbaijan will never be alone before the Armenian terror state and the bullies who back it. Turkey’s support is absolute and complete,” Bahceli declared via Twitter.

Armenian Prime Minister Nikol Pashinyan said 105 Armenian service personnel had died in the fighting, which he blamed on Azerbaijan. In a speech to the Armenian parliament today, Pashinyan said Azerbaijan had seized some parts of Armenian territory. He said his country had appealed to the Moscow-led Collective Security Treaty Organization (CSTO). A CSTO fact-finding mission was due to travel to the region.

Armenia says Azerbaijan is shelling towns and villages along the Armenian border from Jermuk in the north all the way to Kapan in the south.

Azerbaijan said it had lost 50 men in the first day of the violence and insisted that Armenia instigated the attacks. However, Azerbaijan’s Foreign Minister Jeyhun Bayramov said his country was ready to declare a “humanitarian ceasefire” today during a meeting with Russian special envoy Mikhail Shvydkoy He did not elaborate.

Pashinyan has pinned his political survival on a peace deal with Azerbaijan, arguing this would help the tiny land-locked country grow more prosperous and less dependent on Russia. It’s therefore unclear why he would want to provoke Azerbaijan into a new bout of fighting.

All of this also bodes ill for ongoing peace talks between Armenia and Turkey. Since January, Turkish and Armenian envoys have been meeting to discuss establishing diplomatic ties and re-opening their land borders that were sealed by Ankara in 1993.

Turkey is using the talks mainly to lobby for Azerbaijani demands. Yet Pashinyan has continued to cling to them as the best insurance against another ruinous war. The past days’ events will have cast even greater doubt on what was always a shaky premise.

“Armenia’s leaders have tried to resort diplomacy as much as they can. We know there is no military solution to this conflict,” said Andranik Shirinyan, an Armenian lawyer and activist who coordinates projects for Freedom House, a New York-based advocacy group.

“However, instead of using its diplomatic leverage to end the war, Turkey is encouraging Azerbaijan in its aggression. The fate of Armenia as a sovereign country is at stake,” Shirinyan told Al-Monitor.

The November 2020 truce was meant to give Russia a central role, and as Armenia saw things, provide Russian protection against further Azerbaijani attacks. But Russia peacekeepers failed, or more likely ignored their role, and Azerbaijan kept up its attacks despite Russian President Vladimir Putin’s appeals for calm.

Erdogan will reportedly discuss the crisis with Putin when they meet in Samarkand later this week at a summit of the Shanghai Cooperation Organization. The meeting is expected to take place Friday, Reuters reported.

The escalation came as a surprise for many in Azerbaijan. “We were not expecting this, least of all after the two leaders met in Brussels only weeks ago and pledged to continue talks on a comprehensive peace deal,” said Zaur Shiriyev, Azerbaijan researcher for the International Crisis Group.

Shiriyev was referring to the Aug. 31 meeting between Pashinyan and Azerbaijani President Ilham Aliyev, under the auspices of the President of the European Council, Charles Michel. The leaders agreed to meet again in November to pursue a comprehensive peace deal. Their foreign ministers were slated to meet later this month to discuss outstanding issues such as the delineation of common borders, unblocking transport corridors and the return of Armenian prisoners of war.

Shiriyev speculated that Azerbaijan’s game plan is to squeeze concessions out of Armenia at the table by creating new facts on the ground. The Azerbaijani media is rife with rumors that Aliyev plans to establish a buffer zone along the border incorporating parts of Armenian territory. However, Shiriyev told Al-Monitor, he did not believe that Baku would go that far knowing the international censure it would face. Nor would Russia ever allow it, he contended.

Erdogan will likely press Putin to use his influence over Armenia to cede to the slew of Azerbaijani demands. Baku wants Armenia to renounce all claims to Nagorno-Karabakh, which is majority Armenian but is internationally recognized as part of Azerbaijan. It also wants Armenia to allow a transport corridor giving Azerbaijan unrestricted access to its exclave on the Turkish border, called Nakhichevan and for customs and passport controls to be waived.

Armenia says this could constitute a breach of its territorial sovereignty. Azerbaijan’s real intention, many fear, is to occupy those lands and in doing so effectively cut off Iran from Armenia. Turkey obviously supports the scheme because it would gain direct access to Azerbaijan and on to Central Asia. Ominously, Azerbaijani attacks are concentrated in southern areas close to Iran.

“Azerbaijan is talking about a corridor. But I want to say very clearly that we are not going to give anyone a corridor through Armenian territory,” Pashinyan asserted at a conference in Russia on Sept. 8. “But we will open a road and are ready to do that at any moment. We also made these proposals to Azerbaijan. As soon as Azerbaijan accepts, we will be able to very quickly implement this agreement.”

Iran is every bit as wary of Azerbaijan’s demands. “The idea of establishing the Zangezour corridor, as presented and pursued by Azerbaijani officials, would deprive Iran from two important geopolitical advantages," said Hamidreza Azizi, a CATS fellow at the German Institute for International and Security affairs who focuses on Iran’s relations with Turkey. "First, Iran’s so-far unique position in providing access between Nakhichevan and Azerbaijan’s mainland via Iranian territory. Second, and more importantly, Iran’s land border with Armenia.”

For decades, Iran would use Azerbaijan’s reliance on the Iranian route to Nakhichevan as leverage over Baku, Azizi told Al-Monitor. That leverage dissipated after the 2020 war. However, a corridor running along the current Iranian-Armenian border would “be a geopolitical catastrophe” for Iran.

“I don’t see any real means Iran could resort to in order to reverse the situation, if it’s going to happen,” Azizi noted. Tehran mostly counted on Russia to oppose Baku’s plans. But with Russia bogged down in Ukraine, “All Iran can do – and is doing – is to resort to a combination of diplomatic outreach to Baku and at the same time, showing military readiness. I really don’t expect Iran to go to war with Azerbaijan over this issue,” Azizi concluded.