Five years on, no justice for victims of IS suicide bombing spree in Turkey

Families of the 33 victims of the devastating Suruc attack by an Islamic State suicide bomber commemorated the massacre today, reminding Turkey and the world that justice has yet to be served. 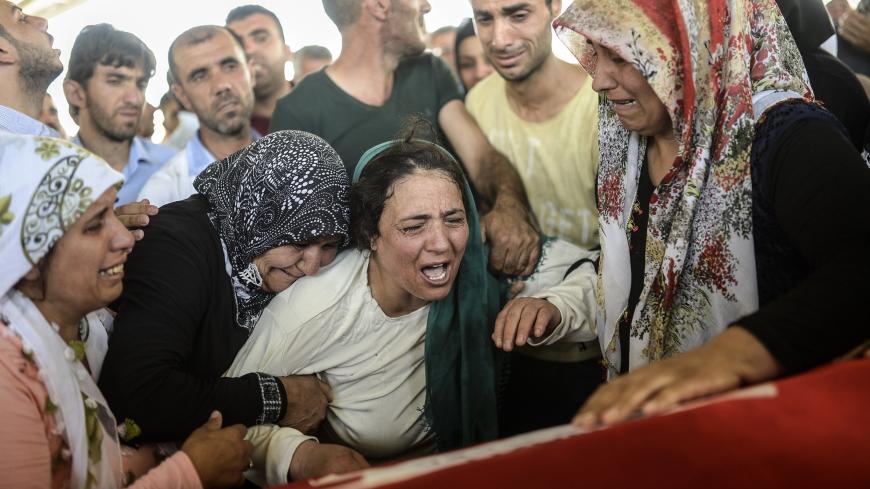 The mother of a victim (C) cries for her son on his coffin during a funeral ceremony in Gaziantep on July 21, 2015, following a suicide bomb attack the day before which killed 33 in the southern Turkish town of Suruc. - BULENT KILIC/AFP via Getty Images

Five years ago today, an Islamic State suicide bomber blew himself up at a cultural center in Turkey’s southeastern border town of Suruc. The attack killed 33 civilians, the first in a wave of bloody jihadi attacks against Kurdish activists and their allies inside Turkey. Families of the victims say justice has yet to be served.

Seyh Abdurrahman Alagaoz killed himself along with the tens of idealistic youths who had arrived from across Turkey. They were planning to carry toys, medical supplies and other materials to Kobani, the mainly Kurdish Syrian town directly across the border from Suruc that was reduced to ruins in a bloody standoff with IS.

Families of the victims held separate gatherings in Suruc, Istanbul and Ankara to commemorate the tragedy. In Suruc, police backed by armored vehicles and water cannons threatened to intervene when families went to unfurl posters of the deceased.

At a joint news conference in the city of Urfa, lawyers for the victim’s families said authorities had refused to cooperate from the get-go, part of what they charge is an ongoing effort to shield the perpetrators. They presented evidence of the government’s alleged cover-up in a report.

Only one of the bomber’s three alleged accomplices, Yakup Sahin, has been caught so far. Prosecutors are demanding life sentences for him and his co-conspirators, who are thought to be in hiding in Syria. Bureaucrats who may have been complicit or criminally negligent have not been investigated despite plaintiffs’ repeated demands.

Suruc’s former police chief was prosecuted for failing to act on intelligence that should have flagged a potential attack. Mehmet Yapalial was sentenced to less than two years in prison in January 2017. He got off with a roughly $1,000 fine to be paid in installments, provoking outrage among victims’ loved ones.

The case remains shrouded in mystery.

The question of how Alagoz, a radicalized Kurd from the southeastern province of Adiyaman, was able to enter Suruc unhindered despite being on the authorities’ radar remains unanswered. Evidence submitted by the plaintiffs has not been admitted. Five hours’ worth of security camera footage recorded by multiple sources in the aftermath of the blast is being withheld by prosecutors.

“Had the Suruc massacre been illuminated, the other massacres would not have been carried out,” argued Serdil Izol, a member of the families’ defense team. Izol was referring in particular to the suicide bomb attack targeting Kurdish peace activists that occurred three months later in the capital Ankara. Some 104 people died, making it the worst terror attack in Turkey’s history. One of the perpetrators was identified as Alagoz’ brother, Yunus Emre. Their father had filed a criminal complaint against Yunus in October 2014 saying he had probably joined “an armed terrorist group.”

Cagla Seven, a survivor of the Suruc carnage, demanded that Ahmet Davutoglu, who was prime minister at the time, testify in the case. Davutoglu recently launched a new center-right party to challenge Turkish President Recep Tayyip Erdogan and has publicly hinted that he was aware of the nefarious activities of the state. “If the ledger on the fight against terrorism is exposed, many people will no longer have the courage to appear in public,” he said without naming anyone.

Turkey’s laissez-faire approach compounded by a steady of flow of thousands of foreign fighters through its borders to Syria dealt a serious blow to its international image from which it has yet to recover. So it came as something of a shock when Turkey bragged last week that it had exfiltrated a Moldovan woman and her four children from al-Hol camp in Kurdish-administered northeast Syria in a joint operation with Moldovan authorities. The camp is home to around 60,000 wives and children of Islamic State fighters.

Turkey’s state-run Anadolu news agency reported that Nadia Barkal and her Syrian husband had decided to move from the Moldovan capital Chisinau in 2013 to “reside in Syria’s Manbij district in Aleppo province” and that he had been killed in “military clashes” in 2017. The article made no reference to IS.

Manbij, where IS planned the Paris attacks of November 2015, was wrested from the jihadis by US-backed Kurdish forces in June 2016.

Barkal was received at Chisinau airport by Moldovan President Igor Dodon, suggesting that she comes from a powerful family, sources speculated. The Autonomous Administration of northeast Syria blasted the operation in a statement saying Turkey had repeatedly sought to break IS brides and their children out of al-Hol.

Privately, Syrian Kurdish officials aired bemusement as to why Turkey’s national intelligence agency MIT would allow the affair to be advertised. One of the officials speculated in an interview with Al-Monitor that MIT director Hakan Fidan’s political rivals within Erdogan’s fractious inner circle might have deliberately leaked the story to Anadolu. The aim may have been to embarrass the spy chief just as he is reportedly lobbying to replace the outgoing Turkish ambassador to Washington, Serdar Kilic. MIT is widely known to be a key interlocutor with a wide array of Sunni opposition rebels in Syria, including more radical factions that later broke off to join IS.

Anne Speckhard, director of the Washington-based International Center for the Study of Violent Extremism, has interviewed over 200 IS detainees, including an emir who provided detailed accounts of Turkey’s alleged complicity with the jihadis.

“He told me all about how he had been assigned basically as the [IS] ambassador to Turkey — my words, not his. He claimed to have negotiated with Turkish MIT and military and to have even been invited to a meeting with President Erdogan which never materialized,” recalled Speckhard in an interview with Al-Monitor. “He claimed to have negotiated agreements about the entry of foreign fighters across the Turkish border, reentry for medical care, water levels in the Tabqa dam to allow for generating [IS’] electrical energy needs and for supplies brought in from Turkey. He was very credible and Iraqi intel said the same about him. I interviewed him for five hours.”

Speckhard continued, “This latest act, however, was completely brazen as it flouts that Turkey is part of the US-led global [anti-IS] coalition. The silence of the global coalition members is indeed strange but maybe we will see outcry sometime this week as it’s indisputably material support of a woman suspected of having been a part of [IS] to have helped her escape the camp, and for a NATO country to do this is clearly unacceptable.”