The Russian military said Tuesday that three Russian troops and an unspecified number of Turkish soldiers were injured in the attack. 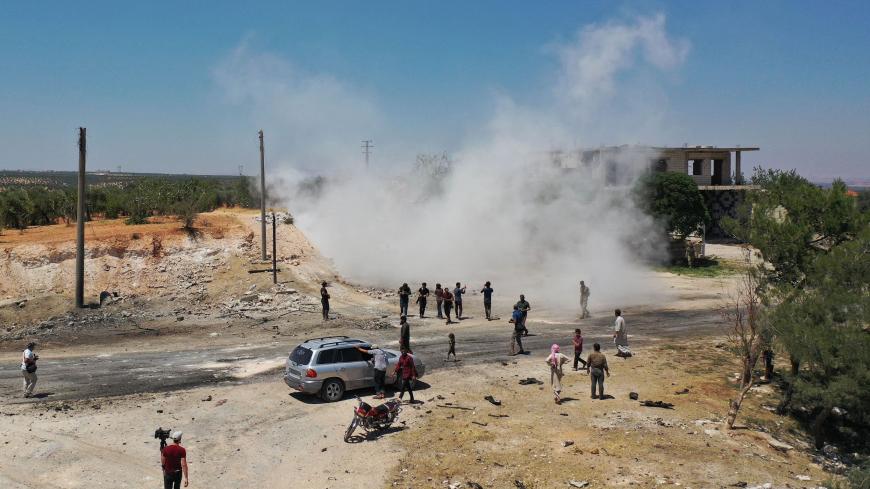 An aerial picture shows Syrians gathering at the site of an improvised explosive device that hit a joint Turkish-Russian patrol on the strategic M4 highway, near the Syrian town of Ariha in rebel-held northwestern Idlib province, on July 14, 2020. - OMAR HAJ KADOUR/AFP via Getty Images

The incident took place in southern Idlib province, where Russian and Turkish troops have been carrying out patrols along the strategic M4 highway connecting Aleppo and Latakia provinces.

"On July 14, at about 8:50 Moscow time, an improvised explosive device detonated near the settlement of [Ariha],” reported the Russian reconciliation center in Syria, as quoted by the TASS news agency.

The Russian troops sustained “light injuries” and an unspecified number of Turkish troops were also injured in the blast. The wounded Russian soldiers were evacuated to the Khmeimim air base in Latakia for medical care, TASS reported.

“Following the incident, the joint patrolling was stopped [and] damaged vehicles are being evacuated,” the ministry said.

According to the UK-based Syrian Observatory for Human Rights, the explosion came “despite the intensive sweeping operations by Turkish forces in the past 24 hours.” The monitoring group reported that a new joint patrol set off from Trenbeh village in the eastern Idlib countryside.

Russia and Turkey, which back opposing sides in the war, established a jointly patrolled buffer region as part of a March cease-fire aimed at ending months of bloodshed in Syria’s last rebel bastion.

Prior to the truce, a Russia-backed air and ground campaign displaced roughly one million people in Idlib and sent scores fleeing to the closed Turkish border. Large parts of Idlib are controlled by Hayat Tahrir al-Sham, which is an offshoot of al-Qaeda, a designated terrorist group by the United States and the United Nations Security Council and regularly cited for human rights violations in areas under its control. The  Russian-backed Syrian offensive has left 500 civilians dead and pushed thousands deeper into poverty.