Intel: Turkey targeted by both sides in northern Syria conflict

The Turkish troops in northern Syria have become a target of all warring parties in the area in less than a month, after a rocket attack by a radical group killed two Turkish soldiers and wounded one in the region yesterday. 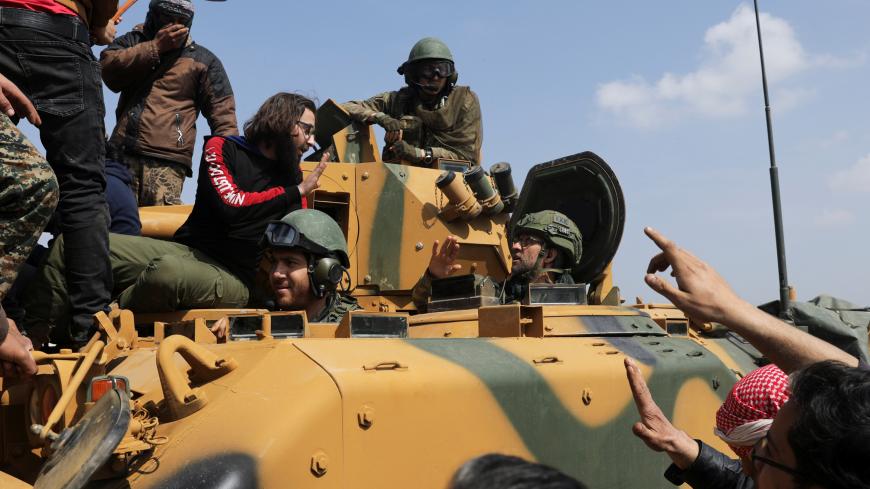 A Turkish soldier gestures as people stand on a military vehicle during a protest against the agreement on joint Russian and Turkish patrols, at M4 highway in Idlib province, Syria, March 15, 2020. - REUTERS/Khalil Ashawi

The Turkish troops in northern Syria have become a target of all warring parties in the area in less than a month, after a rocket attack by a radical group killed two Turkish soldiers and wounded one in the region yesterday.

Why it matters: The attack might be a harbinger of a new front against Turkish troops in the region, where more than 60 Turkish soldiers have been killed in the clashes between Russia-backed Syrian government forces and Turkey-backed Syrian rebels in the past month.

The radical forces, the largest among them Hayat Tahrir al-Sham, were fighting alongside Turkey-backed Syrian rebel forces until Turkey and Russia reached a cease-fire agreement March 5.

Yet yesterday’s attack indicates that the radical groups that are opposed to Turkish-Russian cooperation in Idlib are now turning against the Turkish troops.

Along with reopening of the M4 highway, which links Syria's east and west, and the creation of a security corridor on each side of the strategic road, the agreement requires that Turkey rout out the radical elements from the Syrian opposition's ranks.

The Russian Defense Ministry announced that the patrol was cut short because of “provocations” by radical groups.

Turkey's statement, meanwhile, stopped short of leveling accusations against its de facto allies in the fight against forces loyal to Syrian President Bashar al-Assad. “The first round of the joint Turkish-Russian patrols was conducted as called for in the Moscow deal,” the Turkish Defense Ministry statement said.

Five days after the patrol, Turkish troops were subject to a rocket attack near Mount Zawiya on the M4. The attack was organized by “some radical groups,” the Turkish Defense Ministry said March 19.

The Turkish forces “retaliated against the attack immediately” by hitting the established targets in the area, the ministry added.

Turkey hasn’t identified the group behind the attack, but the location is known to be an operation area of Hurras al-Din, an al-Qaeda affiliate.

Refusing the March 5 deal between Ankara and Moscow, one of the leaders of the group called on the jihadi forces in the region “to maintain their positions” near the M4.

What’s next: Turkey continues its military buildup on the M4, in particular, and in Idlib’s de-escalation zone.

Turkey will “decisively continue its activities in the Idlib de-escalation zone,” the ministry announced today, denying reports that Turkish troops are withdrawing from the region.

Yet it's an open question as to how Turkey will eliminate the radical elements among the Syrian opposition ranks.

The presence of the radicals in Idlib has served as a pretext for Russian support of the Syrian government’s military push against the country’s last shrinking rebel bastion.

Turkey pledged to cleanse the opposition ranks of Islamists as part of a 2018 deal between Ankara and Moscow, but was not able to fulfill it. The commitment was reiterated in the March 5 Moscow deal.

Know more: Fehim Tastekin explains why the Moscow deal between Turkey and Russia is sort of “a mission impossible” from the outset. And Metin Gurcan explores how Turkey is considering following three different scenarios in Idlib.