Confusion prevails in Ankara on how to resolve the entangled Idlib crisis and the choices it will ultimately make could bear on its geostrategic orientations in the coming years. 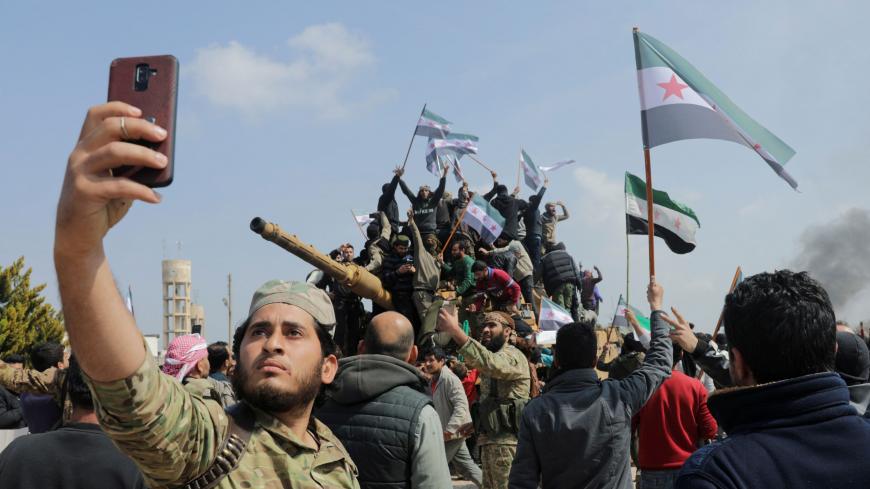 A Turkey-backed Syrian rebel fighter takes a picture with a mobile phone during a protest against the agreement on joint Russian and Turkish patrols of the M4 highway, Idlib province, Syria, March 15, 2020. - REUTERS/Khalil Ashawi

Turkey remains faced with a major dilemma on how to proceed in Syria after its latest deal with Russia led to a fragile lull in the rebel stronghold of Idlib but fell short of a lasting solution. Contrasting visions appear to be under discussion in Ankara, calling for choices that could bear on Turkey’s foreign policy in the long run.

The most crucial provision in the deal with Russia, sealed by the two countries’ presidents in Moscow on March 5, is perhaps the one regarding the status of southern Idlib. The provision calls for the creation of a security corridor with a depth of 6 kilometers (3.7 miles) on either side of the key M4 highway and joint Turkish-Russian patrols along the route to ensure de-escalation. The two sides have divided control over the corridor, with Turkey responsible for the northern side and Russian forces — and by implication, the forces of Syrian President Bashar al-Assad — in charge of the southern section.

The first Turkish-Russian joint patrol March 15 was cut short because of locals blocking the road to protest Russia's taking control of the area south of the M4. The patrols could only go 3 kilometers (about 2 miles), failing to reach even the critical town of Nayrab, due to what the Russian Defense Ministry described as “provocations" planned by militants. “The patrol’s route was shortened in light of plans made by radical groups not controlled by Turkey,” it said. “Terrorists sought to use civilians, including women and children, as human shields.”

Ankara now appears stuck between the demands of Moscow and locals in southern Idlib, manipulated by radical groups linked to Hayat Tahrir al-Sham, the main group holding sway in Idlib.

Of note, despite the cease-fire resulting from the Moscow deal, most Syrian troops have remained in their positions along the front line in southern Idlib, with new troops arriving to replace some of them, and Turkey has continued to reinforce its troops in the region.

Local sources contacted by Al-Monitor suggest that Assad’s forces are highly likely to mount a limited military operation in the coming weeks in a bid to take control of Jabal Zawiya, the mountain dominating the area and most of the fertile Ghab plain, which is currently under the control of Hayat Tahrir al-Sham. Damascus is apparently trying to persuade Moscow on such a limited offensive on the grounds that the March 5 deal does not allow Turkey to shield rebel groups to the south of the security corridor and Moscow should force Ankara to do something about this. Thus, the future status of the M4 highway and the question of how to tackle the noncompliant radical groups are hanging over the cease-fire like the sword of Damocles.

Moscow needs the security corridor along the M4 to protect its military presence in Latakia and the Khmeimim air base from attacks by radical militants, or “terrorists” as Russia calls them. The security corridor arrangement seems to have placed two liabilities on Ankara. The first is a commitment to take all kind of measures, including military action, against radicals to the north of the M4, who have dismissed the Moscow deal and vowed to continue fighting. The second pertains to Syrians to the south of the M4 who are averse to living under the control of Russia and, therefore, Damascus, which raises the specter of a fresh exodus to the north and then to the Turkish border.

Russia seems eager to have Idlib province's territory, but not its inhabitants. It appears that Moscow and the Assad regime want to drive the Sunni opposition groups and their families to the north, which is already happening little by little.

As a result, six of the 12 Turkish military observation posts established under the 2018 Sochi accord remain besieged by Syrian forces, even if under Russian protection, including four outposts to the east of the M5 and two in southern Idlib. Ankara has maintained it will keep the bases until there is an ultimate solution in Idlib.

Nevertheless, Turkey remains confused on how to proceed in Idlib. Three approaches appear to stand out in Ankara regarding Idlib in particular and Syria in general.

The first aims to take advantage of the US-Iran military faceoff in Syria, which has become increasingly evident since the assassination of Iran’s Quds Force commander Qasem Soleimani by US forces in January. According to proponents of this approach, the stalemate in Idlib presents Turkey the opportunity to move away from Russia and Iran and thus strengthen President Donald Trump’s hand in advocating for Turkey vis-a-vis Congress and the Pentagon. The idea here is to allow Turkey to rebalance its relationship with Russia, which has devolved into an asymmetric reliance, and pave the way for an extended Turkish military presence in Syria by engaging in military cooperation with the United States and Israel at the expense of moving away from Russia and Iran. Jumping from the Russian-Iranian train to the US-Israeli one in Syria, the argument goes, could help Turkey maintain a longer military presence in Syria.

The second approach is based on the idea that one should clear the table with the same partners with which the table was set. Proponents argue that, despite US prodding and offers, Turkey should stay with the Russian-Iranian axis and try to manage the crisis until the ultimate picture takes shape in Idlib in particular and Syria in general. Of note, Iran — embroiled in growing tensions with the United States since Soleimani’s killing and now in the grips of a severe coronavirus outbreak — appears reluctant to strain ties with Turkey for now, even though the leadership of Shiite militias suffered casualties in Turkish drone strikes that targeted Hezbollah and other pro-Iranian groups in western Aleppo in late February and early March. The main argument in this approach is that the United States can never be trusted, given its continuing military collaboration with Syrian Kurdish militants despite long-running Turkish objections. Turkey sees the People’s Protection Units (YPG) in Syria as an extension of the Kurdistan Workers Party (PKK), the armed outfit that has fought Ankara since 1984 and is recognized as a terrorist group by much of the international community.

According to the third perspective, Turkey should follow a policy of balancing between the US-Israeli and Russian-Iranian axes, while using military power on the ground as a coercive diplomatic tool, just as it did in its military campaign in Idlib from Feb. 29 to March 3 in a bid to change the operational balance on the ground. The underlying idea here is that Turkey can rely on its own military capacity to force the United States and Russia to pay regard to Ankara’s interests to the east and the west of the Euphrates respectively by projecting military power on the ground.

This approach, however, has two essential caveats. First, Turkey is largely deprived of using air power as it lacks control of Syria’s airspace. Second, the abilities of the Turkey-backed Syrian National Army in terms of waging ground offensives and keeping territorial control remain dubious.

The discussions in Ankara suggest that Turkish decision-makers are edging fast to a moment of truth on Idlib and Syria. The choice they face is not an easy one. Continued alignment with the Russian-Iranian axis dictates reconciliation with Assad in northern Syria, while opting for collaboration with the US-Israeli axis would require Turkey to soften its hard-line stance on the PKK-affiliated YPG. By relying on its own military capacity, meanwhile, it would run the risk of showdowns with Washington, Moscow, Tehran and Damascus on the battlefield.

Ankara’s decision will bear directly not only on its moves in Idlib, but also on its geostrategic orientation and foreign policy choices in the coming decade.

Ankara has been in the grips of soul-searching on its strategic belonging for some time. Its choice between the Russian-Iranian axis and the Western security bloc in the context of Idlib will provide a major clue on where its soul-searching will lead.