Erdogan: Turkey will stay in Syria until the 'people are free'

The Turkish president's comments follow parliamentary elections in Syria over the weekend that critics described as a farce. 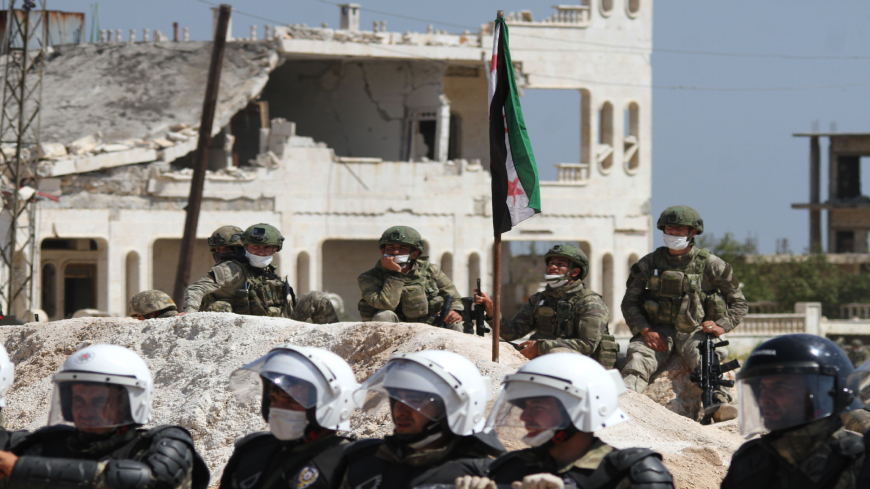 Turkish army troops, wearing protective masks against the coronavirus, take position behind sand barricades aimed at blocking the road by Syrian protesters on the M4 highway, which links the northern Syrian provinces of Aleppo and Latakia, in opposition of joint Turkish-Russian military patrols near the village of al-Nayrab in Syria's jihadist-controlled northwestern Idlib province on April 13, 2020. - ABDULWAJED HAJ ESTEIFI/AFP via Getty Images

Turkish President Recep Tayyip Erdogan said Tuesday that Turkish forces would stay in Syria, where they are backing the opposition fighting the country’s longtime dictator Syrian President Bashar al-Assad, until peace is restored.

“Until the Syrian people are free, peaceful and safe, we will remain in this country,” Erdogan said during a speech Tuesday, according to Turkish news outlet Ahval.

Turkey supports some of the armed rebel groups fighting Assad's government. Earlier this year, the Turkish government sent thousands of troops to Syria's northwest to stave off a Russian-backed regime offensive on rebel-held Idlib.

The government’s campaign sent hundreds of thousands fleeing toward the locked Turkish border, which has remained closed for years to most Syrian refugees. Turkey already hosts some 3.6 million Syrians and is keen to avoid another refugee crisis on its doorstep.

The bloodshed ended with a fragile truce brokered by Ankara and Moscow, Assad’s main ally, in early March. Part of the cease-fire called for the two countries to establish a jointly patrolled buffer region along the strategic M4 highway connecting Aleppo and Latakia provinces. Last week, several Turkish and Russian troops were reportedly injured after a roadside bomb exploded near their patrol.

Meanwhile, Syrians across government-held areas on Sunday went to the polls to cast their ballots in parliamentary elections that the opposition denounced as a sham. Assad's Baath Party and loyalist groups are expected to win most of the 250 seats in what marked the third such election since the civil war erupted in 2011.

After nine years of war, the regime has cemented control over roughly 70% of the country. The remainder is under Kurdish authority in the northeast, and a pocket of northwest Syria is held by the opposition and terrorist groups.