Democrats and Republicans clashed today over a newly proposed restriction on Palestinian assistance in this year’s foreign aid spending bill — the latest chapter in the struggle to resume economic support for the West Bank and Gaza Strip. 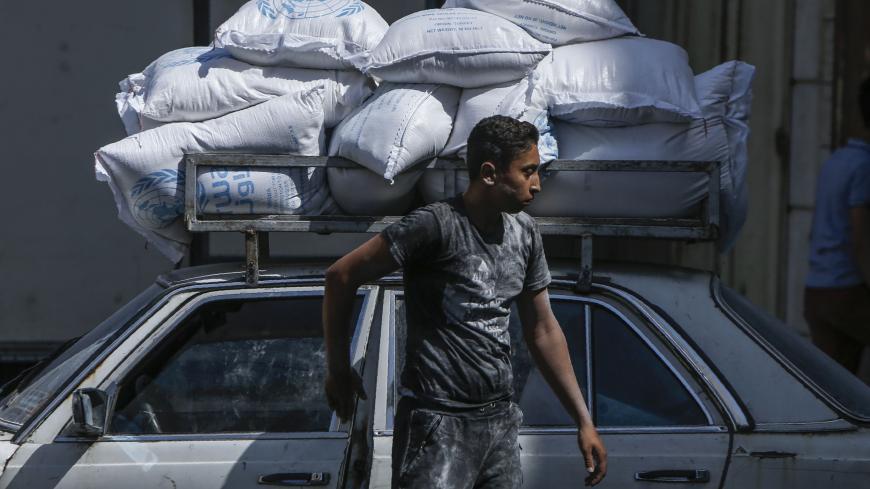 A Palestinian taxi driver gets out of his car transporting food aid provided by the United Nations Relief and Works Agency for Palestinian Refugees, to be delivered to refugee homes at the al-Shati camp, in Gaza City, on June 11, 2020, instead of the usual distribution at a UN center in the city, due to the COVID-19 pandemic. - Photo by MOHAMMED ABED/AFP via Getty Images

Democrats and Republicans clashed today over a newly proposed restriction on Palestinian assistance in this year’s foreign aid spending bill — the latest chapter in the struggle to resume economic support for the West Bank and Gaza Strip.

Democrats succeeded in removing language from the legislation that would have withheld the bill’s $225 million in economic assistance for the West Bank and Gaza unless the Palestinians agree to resume security cooperation and training with Israel. The Democratic amendment to remove the language passed by voice vote over Republican objections. The House Appropriations Committee proceeded to advance the full spending bill in a 29-21 party line vote.

Why it matters: Democrats have fought an uphill battle to restore economic and humanitarian aid to the Palestinians since the Donald Trump administration eliminated it in 2018. The Palestinians proceeded to suspend security cooperation with Israel in May to protest Israeli Prime Minister Benjamin Netanyahu’s attempt to annex large swaths of the West Bank under the auspices of the Trump peace plan.

“As one of the most ardent supporters of the US-Israel relationship and longtime champion for Israel’s security, I believe the administration’s cutoff of assistance to the Palestinian people has perpetuated the very instability and distrust that now threaten any prospect for a viable peace process,” House Appropriations Committee Chairwoman Nita Lowey, D-N.Y., said ahead of the vote. “This committee should lead the way in improving the situation on the ground by first restoring US assistance to food and clean water, education and health care, especially as COVID cases are on the rise in the region.”

The top Republican on the foreign aid subcommittee, Rep. Hal Rogers of Kentucky, defended the newly proposed restriction as a routine condition akin to restrictions on other countries across the globe. “Striking a common-sense determination and reporting requirement related to security cooperation makes the bill less likely to become law by weakening oversight of a program that is heavily scrutinized,” said Rogers.

What’s next: While the foreign aid spending bill is expected to easily pass the Democratic-held House, removing the restriction from the bill could become a flashpoint with the Republican-controlled Senate when the two chambers negotiate on compromise legislation. In the meantime, Democrats continue to push the Trump administration to allocate the $75 million in Palestinian economic aid that Congress appropriated in December.

Know more: Congressional Correspondent Bryant Harris keeps you up to date on the latest efforts to restore Palestinian aid, as well as Lowey’s new legislation to facilitate people-to-people exchanges between Palestinians and Israelis.