The Democratic-held House is launching another bid to increase Palestinian economic aid while facilitating people-to-people programs with Israel. 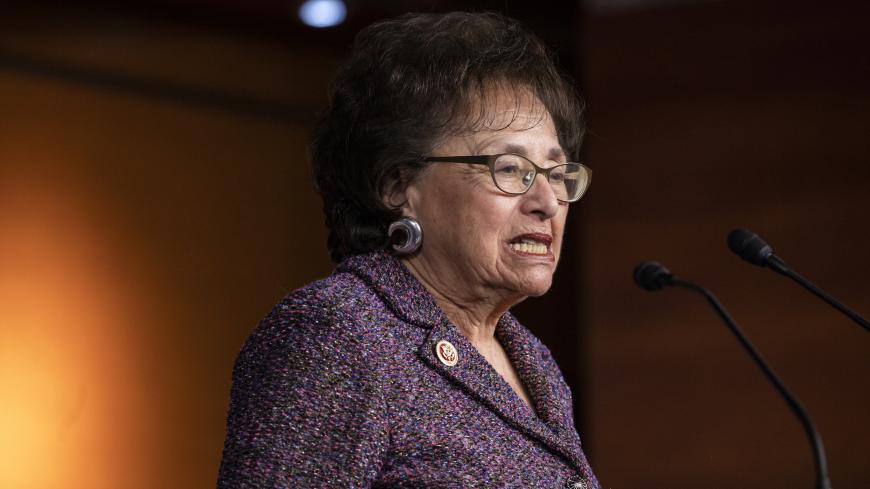 US Rep. Nita Lowey, D-N.Y., speaks on Jan. 28, 2020, in Washington about her trip to Israel and to the Auschwitz-Birkenau concentration camp in Poland as part of a bipartisan delegation from the House of Representatives. - Samuel Corum/Getty Images

The Democratic-held House is once again attempting to restore economic and humanitarian aid for the Palestinians to levels that slightly exceed the $215 million in assistance the United States provided before President Donald Trump eliminated it.

The House’s foreign aid panel on Monday unanimously advanced its spending bill, which includes $225 million in economic aid for the West Bank and Gaza, setting the stage for a full Appropriations Committee vote later this week.

Ahead of the vote, Appropriations Chairwoman Nita Lowey, D-N.Y., touted the fact that the bill “seeks to restore humanitarian and development assistance to the Palestinians to continue the viability of a two-state solution by providing resources to organizations working in the West Bank and Gaza.”

Rep. Hal Rogers, R-Ky., the top Republican on the foreign aid panel, thanked Lowey for “including $3.3 billion in foreign military financing for our great ally Israel and for your steadfast support for their security.”

The bill also includes legislation introduced by Lowey to establish a program promoting people-to-people exchanges and economic cooperation between Israelis and Palestinians.

“I am particularly proud that, as a bipartisan priority, the mark includes $50 million to fund a new partnership for peace in the Middle East that would promote economic development while strengthening engagement between Palestinians and Israelis through people-to-people programs and economic ventures,” said Lowey, who is retiring at the end of the year.

The legislation authorizing the partnership states that “building a viable Palestinian economy is central to the effort to preserve the possibility of a negotiated settlement leading to a sustainable two-state solution with the democratic, Jewish state of Israel and a demilitarized, democratic Palestinian state living side-by-side in peace, security and mutual recognition.”

Lowey’s foreign aid bill states that a portion of the $225 million “may also be made available as a contribution or grant” to UNRWA for “activities in the West Bank and Gaza,” though it does not specify any mandatory amount.

Although House appropriators sought to provide nearly $227 million in economic aid for the West Bank and Gaza last year, the compromise funding bill with the Republican-held Senate authorized only $75 million. Still, that bill ensured that the State Department cannot reprogram more than 10% of allocated foreign funding appropriated by Congress — a tactic the Trump administration has frequently used to overcome congressional aid directives.

Nonetheless, the State Department has until October 2021 to spend the $75 million in Palestinian aid that Congress appropriated last year — and it’s unclear whether the Trump administration has yet done so.

A group of eight Senate Democrats, led by Sens. Chris Van Hollen of Maryland and Elizabeth Warren of Massachusetts, penned a letter to Secretary of State Mike Pompeo in March to inquire about the status of the $75 million in Palestinian economic aid.