Israel compiles list of officials who could be targeted by ICC

Israel has compiled a list of 200 to 300 names of officials who might be targeted in the future by the International Criminal Court in The Hague. 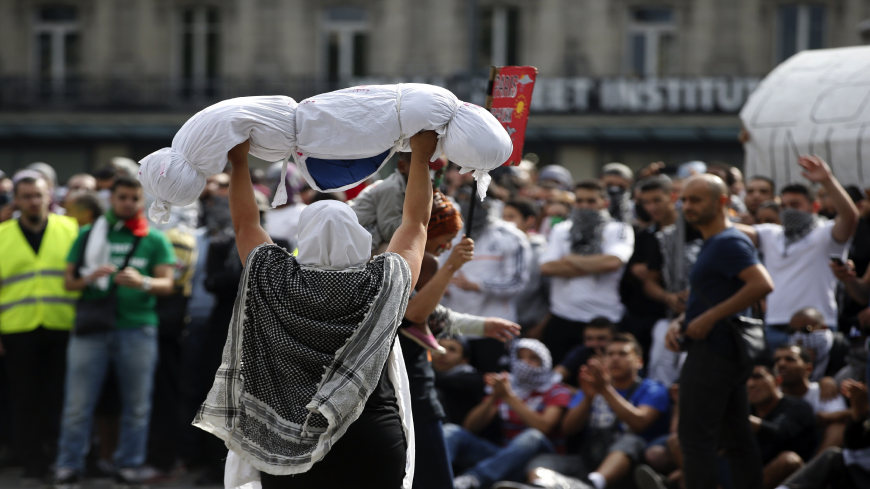 A demonstrator holds a dummy representing the body of a slain child on the Republique Square in Paris during a banned demonstration against Israel's military operation in Gaza, on July 26, 2014. - KENZO TRIBOUILLARD/AFP via Getty Images

Reports on June 25 suggested that the International Criminal Court (ICC) might make its decision on probing Israelis for alleged war crimes in the very coming days. The reports said that Jerusalem is preparing for an imminent ICC decision on whether it can open an investigation into potential war crimes allegedly committed by Israeli officials in Palestinian territories.

A July 16 report now claims that Israeli authorities have compiled a list of 200 to 300 names of senior officials and ex-officials who could be targeted by the ICC.

This confidential internal list is reportedly composed of names of decision-makers in the political, diplomatic, security and military arenas. They are people whom the ICC might decide to probe on alleged actions taken by Israel in the West Bank or the Gaza Strip. More particularly, the ICC might target senior Israelis who served during the 2014 Gaza war (Operation Protective Edge).

Israeli legal experts estimate that the list might include even the highest echelons of decision-makers such as Prime Minister Benjamin Netanyahu and Defense Minister Benny Gantz, especially since both of them served as senior officials during the 2014 Gaza war. At the time, Netanyahu served as premier, while Gantz served as Israel Defense Forces (IDF) chief of staff. Current Shin Bet head Nadav Argaman and Mossad Chief Yossi Cohen each served in sensitive security positions in 2014 and could also be at risk of being persecuted. Other seniors who might be targeted are current Knesset members: former defense ministers Moshe Ya’alon, Avigdor Liberman and Naftali Bennett, and current IDF Chief of Staff Aviv Kochavi, who in 2014 was head of Military Intelligence.

The list itself has not been published. Jerusalem hopes to keep it under wraps to avoid any impression of admission of guilt. In fact, Israel (like the United States) had never ratified the Rome Statute, which makes the legal framework of the ICC, exactly because of such a scenario. In other words, out of fear that its security officials could be charged with alleged war crimes.

If this indeed happens, and if the court issues arrest warrants against Israeli officials, the people on the list would be advised not to travel to certain European countries. It's a complicated situation, especially for the prime minister and his Cabinet ministers.

This is not an impossible scenario. In 2015, Zionist Camp Knesset member Tzipi Livni was forced to use a legal loophole in order to avoid possible arrest when she attended an international forum in London. At the time, anti-Israeli activists petitioned for her to be arrested over alleged Israeli war crimes during the 2008-2009 Gaza war when she served as foreign minister.

The Palestinians became members of the ICC in April 2015. And it was shortly after their admission that they started pressuring the ICC to go after Israel. The process has accelerated in recent months, with ICC Chief Prosecutor Fatou Bensouda announcing in December 2019 a preliminary examination of possible war crimes committed by Israel in the West Bank and Gaza Strip. Israel has been arguing that the Palestinian Authority is not a state, thus cannot petition for an investigation. It also claims that Israeli actions in the territories are a matter for a political conflict, not a matter for the court. Bensouda argued that the court is indeed sovereign to investigate these alleged crimes by Israel.

On June 11, President Donald Trump warned of economic sanctions against ICC workers, an announcement hailed by Netanyahu. Still, most Israeli legal experts think that the American threat won’t thwart the risk Israelis are facing. And as aforementioned, a ruling by the pre-trial court on that possibility is expected in the coming days.