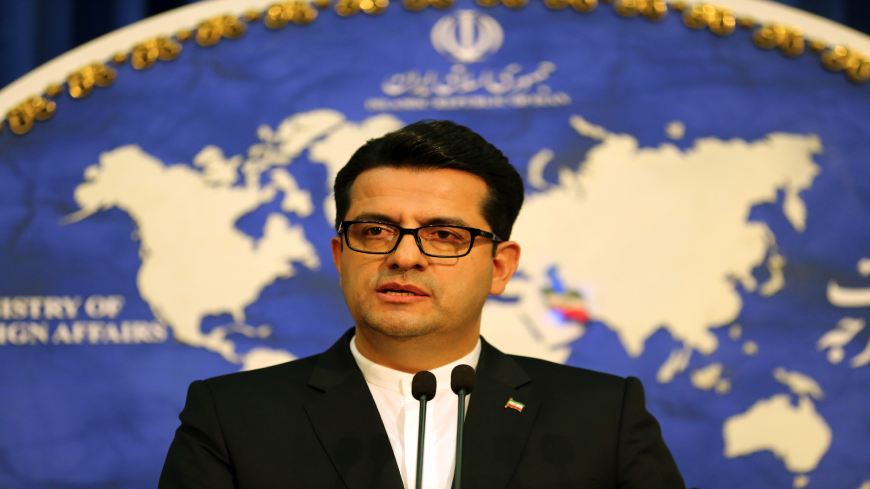 Abbas Mousavi, the spokesman for Iran's Foreign Ministry, gives a press conference in the capital city of Tehran on May 28, 2019. - ATTA KENARE/AFP via Getty Images

Shekarchi said, “We warn the lying Zionists that with continued mischief you will see the upper hand of the resistance and the Islamic Republic of Iran in action.”

Israel has not publicly taken credit for any of the bombings inside Syria, though many analysts and experts believe Israel is responsible.

Israel has instead been silent about the attacks in what some see as a suggestion it is conducting the attacks. Shekarchi said claims that “hundreds or thousands” of Iranians died in the attacks are untrue and baseless claims by “Western Zionist media empire saber-rattling.”

Shekarchi said Iranian “advisers have been in Syria for nine years completely legally and at the request of the Syrian government.” He said despite what Western media claims, in total eight Iranians “have been martyred” in these alleged Israeli attacks. He also listed the names of the individuals who have been killed. Shekarchi said Iran had responded with a missile strike on an Israeli base in the Golan Heights. This attack was reported to have occurred in May 2018.

It is not clear what prompted these comments by Shekarchi. It could be related to recent fires and explosions happening across Iran.

Foreign Ministry spokesman Abbas Mousavi spoke July 16 about an attack that reportedly had Israeli involvement. Mousavi said claims that Israel was behind the recent explosion at Natanz nuclear facility were a “propaganda war by foreign media and especially Zionist media.” Mousavi added that if Israel is indeed behind the attack, then Iran would respond, and that as Iranian Supreme Leader Ayatollah Ali Khamenei once said, “The era of hit and run is over.”

Regardless of who is responsible, Iran has experienced a high number of explosions and fires across the country, including a medical facility, an explosion near a base in east Tehran and fires on seven ships. It is also possible that the United States is behind such attacks. According to former US officials, the CIA was given permission by the Trump administration to conduct secret attacks inside Iran.

Iran also is still dealing with the coronavirus. According to Health Ministry spokesperson Sima Sadat Lari, Iran had 198 deaths due to the coronavirus in the previous 24 hours, bringing the total number of deaths to over 13,000. Lari said 11 provinces are labeled “red zones,” meaning the provinces must take extra measures in following health guidelines. There are also 13 provinces at a “warning level,” meaning they would be soon labeled red zones, including the capital city of Tehran.