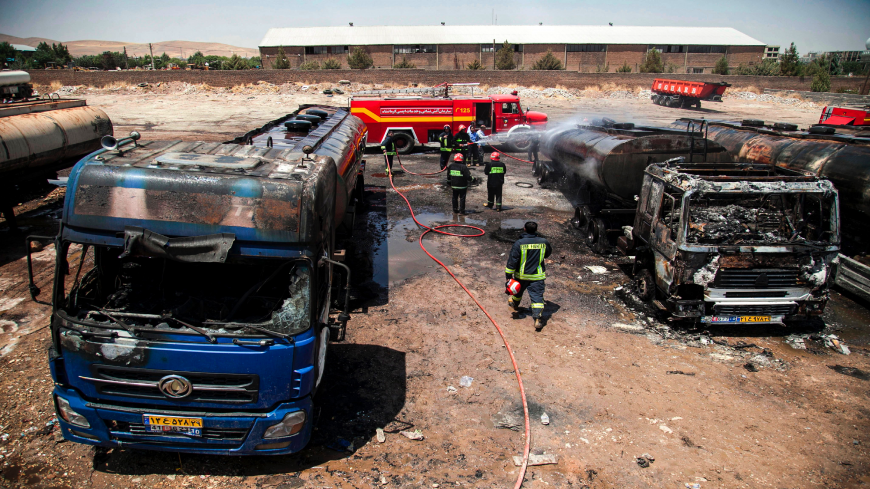 Firefighters extinguish fuel tankers that caught on fire at a lorry park near Iran's western city of Kermanshah on July 28, 2020. The incident is the latest in a string of explosions and fires at military and civilian sites across Iran in recent weeks. - FARZAD MENATI/TASNIM NEWS/AFP via Getty Images

A group of fuel storage tanks exploded in western Iran, state news reported Tuesday, marking the latest in a series of suspicious blasts across the country.

Keyvan Maleki, deputy head of the Kermanshah Fire Department, told ISNA there were no casualties but a few people were injured in the blaze.

“The cause of the accident is under investigation,” Maleki added.

In the past month, Iran has seen a number of mysterious explosions and fires, some of which hit strategic military and nuclear sites. Incidents include a huge explosion at the Parchin military complex in eastern Tehran on June 25 and another at a private medical clinic on June 30 that left 19 people dead.

A July 2 fire at the underground Natanz nuclear facility is believed to have set back the country’s uranium enrichment, which Iran says is used only for peaceful purposes. Iran's official news agency IRNA suggested “hostile countries, especially the Zionist regime (Israel) and the US,” were behind the Natanz fire.

Experts speculate Israel, a longtime adversary of the Islamic Republic, is behind the Natanz fire and the other blasts. Asked about the series of explosions, Israel’s Defense Minister Benny Gantz said his government was not “necessarily” involved in every incident.

Iran has downplayed reports of foreign involvement. During a recent press conference, Foreign Ministry Spokesperson Abbas Mousavi said “limited fires” during this time of year were “neither peculiar nor something happening this year alone."