The explosion is the latest in a series of explosions at facilities across Iran. 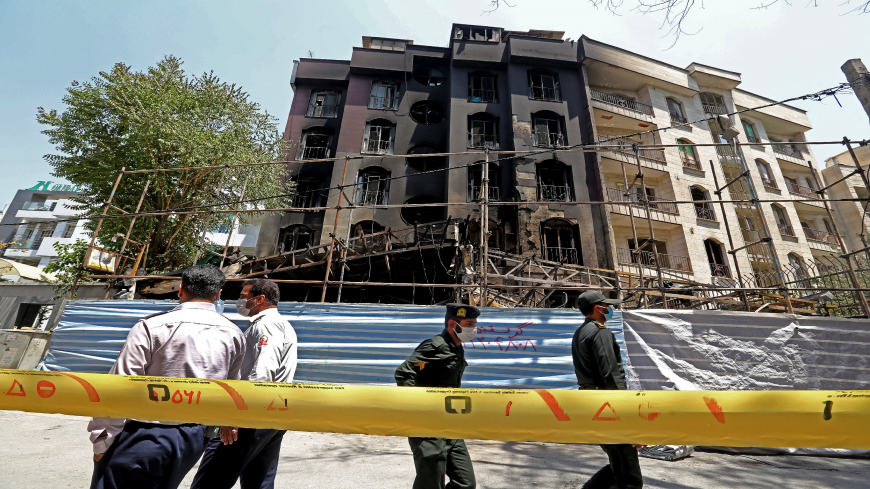 Members of Iranian security forces walk by at the cordoned-off site of an explosion at the Sina At'har health center in the upmarket northern neighborhood of Tajrish in the capital Tehran on July 1, 2020. - ATTA KENARE / AFP

Police in Iran are investigating the cause of a fire that broke out at an industrial complex in northeast Iran, state news reported on Monday.

Citing the semi-official Mehr news agency, Reuters quoted Javad Jahandoust, fire chief at the Kavian Fariman industrial complex, who said the fire was under control after a storage tank exploded. He said the incident at the industrial zone, which is located south of the city of Mashhad, is under investigation.

A string of suspicious fires has rocked the country since late June. Iran’s Defense Ministry confirmed an industrial gas tank exploded near a military complex in Tehran on June 26. That was followed by another gas explosion on June 30 at a private medical clinic that left 19 people dead.

Days later, Iranian officials confirmed there was an “incident” at the Natanz uranium enrichment plant. Two intelligence officials told The New York Times the complex was left in “charred ruins” and could take up to two years to return to its previous production capacity.

On Sunday, a fire caused by an oil leak erupted at a petrochemical facility in southwest Iran, the official IRNA news agency reported. The governor of Mahshahr County said there were no casualties or significant damage.

The blasts come as the Islamic Republic continues to deal with a worsening coronavirus outbreak. Despite more than 13,000 deaths from COVID-19, President Hassan Rouhani said on Saturday the sanctions-battered economy could not afford to close down again.