The sharp rise in the spread of the coronavirus in the Hebron district is blamed largely on weddings and public events, and the tribes have been asked to help stem the spread. 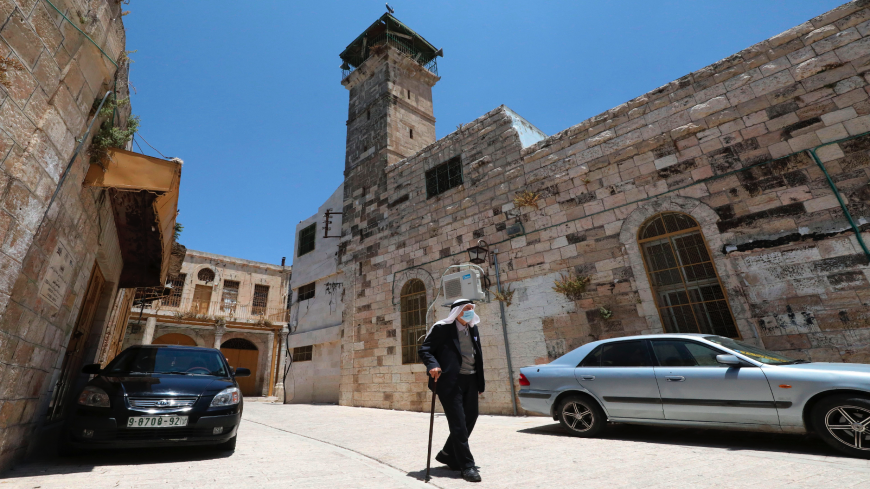 A Palestinian man wearing a protective face mask walks past the closed al-Qazazin mosque in the Old City of the West Bank town of Hebron amid the Covid-19 pandemic crisis, on July 10, 2020. - HAZEM BADER/AFP via Getty Images

Nayef Hashlamoun considers himself a true believer in nonviolence. He worked with Palestine’s leading nonviolent leader, Mubarak Awad, during the period preceding the first intifada, and he later initiated the Watan Center for Culture in his hometown of Hebron. Hashlamoun told Al-Monitor that he credits what he learned about nonviolence in his latest effort to lead and encourage Hebronites to avoid public gatherings as a way to stem the sudden spike in the spread of the coronavirus in the Hebron district.

The Palestinian Ministry of Health had announced July 4 that 2,576 out of the 4,013 Palestinians who had tested positive for the coronavirus come from the Hebron district. During the same period, nine out of the 16 deaths from the coronavirus also came from Hebron. Palestinian Prime Minister Mohammad Shtayyeh sent four Cabinet ministers to Hebron to assess the situation.

Hashlamoun told Al-Monitor that when he noticed the spike in cases, he took the initiative to try and stop the spread through his own family tribe. “Our family belongs to the Ayoubi tribe, and we have a council of elders and a young council. I am active in our tribal affairs because of the need to raise awareness and to address problems from a humanitarian view.”

Hashlamoun says that when he contacted the two tribal councils and expressed the need to act quickly, they gave him the green light. “It was hard to meet face to face, so we were in contact by cell phone. And after discussions, I was given the OK to write an appeal to the members of our own extended family tribe about the need to put a stop to the spread of this virus, which had reached a dangerous level.”

In a strong July 7 statement published on electronic and social media, the Hashlamoun/Ayoubi tribe announced that it “will not participate in any weddings or other public events and [will] follow strict health regulations.”

Hashlamoun told Al-Monitor that the Palestinian government was very happy with their efforts. “We have three ministers from our tribe who are in the government, and we received a high level of feedback from them.”

The initiative of this family was followed the next day by the higher tribal council. Haj Nafez Jaabari, head of the Tribal Commission in Hebron, said in an interview with An-Najah University TV July 8 that all tribal leaders have signed a joint honorary declaration to voluntarily stop all weddings and funerals and other large meetings to avoid further spread of the coronavirus.

While the role of tribal leaders in stopping weddings and public events will eventually produce good results in stemming the spread of the virus, the spread in Hebron also was blamed on religious edicts. Hamadeh Faraneh, a leading observer of the Palestinian scene, said in the daily Ad Dustour July 13 that part of the problem in Hebron was the position of and public declarations by Hizb ut-Tahrir. “Because of the policies and statements of the Islamic Hizb ut-Tahrir, which said that the coronavirus was a conspiracy to hurt Islam and close mosques, they incited the public not to follow the Ministry of Health calls, saying that ‘nothing will affect us except what God has deemed for us.’ As a result, their followers were among the hardest hit when the virus spread.”

Another Palestinian columnist, Hafez Barghouti, also zeroed in on religious Islamists. He wrote July 11 on the news site Khabar Press that religious Islamic groups, especially Hizb ut-Tahrir, are imitating religious Jews in not following health directives. “They are confident that the virus will not affect the believers and will not spread in places of worship. They even attacked the Palestinian government, calling them heretics because they closed mosques.”

Barghouti said that “supporters of Hizb ut-Tahrir broke open mosques and encouraged all to hold mass weddings and funerals, and then the spread happened to reach 300 a day in Hebron even though it took months to record 300 cases before that.”

The dangerously high increase in the number of affected cases in the Hebron governorate is very worrisome. The Palestinian government has added curfews and taken unprecedented steps to close off movement between governorates and ensure that all public gatherings are prohibited. The efforts of community leaders in raising awareness of the importance of health restrictions are of utmost importance to negate those using unscientific facts to discourage the public from following well-researched health orders.