Tribes in Hebron rejected the UN Convention on the Elimination of All Forms of Discrimination Against Women (CEDAW) and some threatened to shut down feminist organizations after Palestinian President Mahmoud Abbas set the minimum age for marriage at 18. 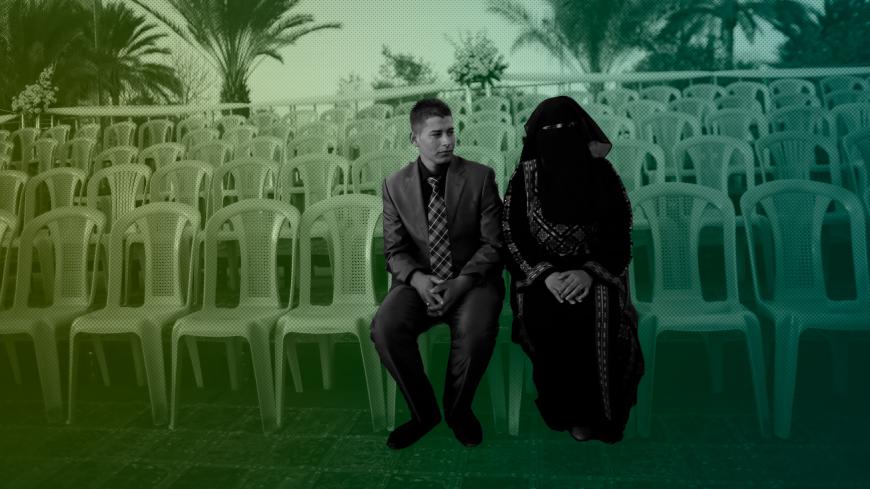 RAMALLAH, West Bank — Palestinian feminists are preparing to launch a broad national coalition in cooperation with human rights institutions and some political parties, in response to recent tribal threats against them.

Tribal leaders in the city of Hebron apparently were fired up after Palestinian Authority (PA) President Mahmoud Abbas issued a decree last month banning child marriage. The decree raises the minimum age for marriage to 18 for both genders; previously, females had to be only 15 and males, 16.

Abbas' order falls in line with the PA's participation in the United Nations Convention on the Elimination of All Forms of Discrimination Against Women (CEDAW). Now, some clans are calling for a rejection of all things feminist and demanding that the PA withdraw from the treaty.

Palestine joined CEDAW in 2014, but Abbas’ decree heralded the PA's actual implementation of the agreement. Some Hebron clans issued a statement Dec. 21 rejecting both the decree and the treaty and threatening to shut down all feminist institutions. They warned media outlets against covering news related to feminists groups and warned judges against abiding by Abbas’ decree. They even called for the cancellation of any rental agreements with feminist groups, accusing complicit landlords of being partners in "crime."

Palestinian tribes outside Hebron have issued no official stance on the matter.

Abdel Wahab Ghaith, a tribal dispute reconciliation chief in Hebron, told Al-Monitor the Hebron clans and citizens stand against CEDAW because it violates Sharia. “This agreement cannot [continue], and we stand publicly against the suspicious feminist groups that call for the implementation of CEDAW," he said.

Ghaith affirmed that the tribes have submitted their position to Hebron Gov. Jibreen al-Bakri "to clarify their rejection of the treaty.” He added, “We will wait for the PA’s position to see the extent of its responsiveness to the demands of the Palestinian people."

The PA position is nebulous, however. The Cabinet confirmed at its Dec. 23 meeting that it upholds the principles and values of Islam and will never contradict them. But PLO Secretary-General Saeb Erekat said in a statement Dec. 24 that joining CEDAW was a national achievement.

"The Palestinian people who struggle to fulfill their inalienable right to self-determination and freedom cannot deny Palestinian women their right to freedom and dignity," he said.

But Ghaith begged to differ. “Feminist associations are a minority, and all Hebron rejects CEDAW. The meeting held a few days ago was attended by 10,000 people, and no one objected to the rejection of the [CEDAW] agreement," he said.

The clans' statement raised some controversy because of its inflammatory wording.

“Our statement may have been very strong-worded, but this is not what's important. What's important is our position on CEDAW,” which is that it contradicts Sharia, Elder Mukhtar Zahdeh told Al-Monitor.

Many people believe that Hizb ut-Tahrir (Party of Liberation), a very popular Islamist political party in Hebron, was behind the tribes' statement. Hizb ut-Tahrir wants to establish a global Islamic caliphate — though it does not support the Islamic State (IS) — and is banned in many countries, including Egypt, Saudi Arabia, Turkey, Russia and China.

Another Hebron clan said Dec. 23 that the statement didn't represent all dignitaries and clans. In fact, al-Tamimi clan, which hosted the tribes’ meeting, said Hizb ut-Tahrir had prepared the statement before the meeting even took place, and no one signed it.

The tribes did agree on rejecting CEDAW, but not the parts of the statement that contained "threats and intimidation and calls for chaos … and civil disobedience," Hijazi al-Tamimi told the local Quds Network.

Tamimi was referring to warning judges against abiding by the decision to raise the minimum age for marriage and the threats to close feminist associations and institutions.

Despite the opposition, Mahmoud al-Habbash, an Abbas adviser and top Sharia judge, issued the decision to implement the marriage rule.

Habbash told Al-Monitor, “The Palestinian Constitution expressly states that Islamic Sharia is the primary source of legislation and that everything must be in harmony therewith. There is also a decision by the Constitutional Court whereby international agreements prevail over local laws, provided these are consistent with the Palestinian religious and cultural legacy.”

Former Minister of Social Affairs Magda al-Masry told Al-Monitor, “The attack on CEDAW is an attack on women's rights, democracy, equality and social justice. This attack stems from tribal concerns over being neutralized and stripped of their powers.”

Masry was referring to the role tribes play in resolving major disputes and crimes such as murder through the tribal judiciary that was employed before the PA's rise to power under the 1993 Oslo Accord.

She said all feminist organizations adhere to CEDAW and explained that feminist groups, coalitions and unions have started working to form a national coalition to defend women's rights in partnership with factions, political parties and human rights institutions.

She added, “The statement used the language of terrorism. It issued threats and incited violence against women. … This is why we call on the government and Attorney General Akram al-Khatib to prosecute tribes." The tribes' threat to close feminist institutions "is not within their competence and would be illegal."