The latest talks between the three countries ended yesterday with no deal, though Egypt and Sudan have made it clear they are strongly opposed to the unilateral filling of the GERD without an agreement. 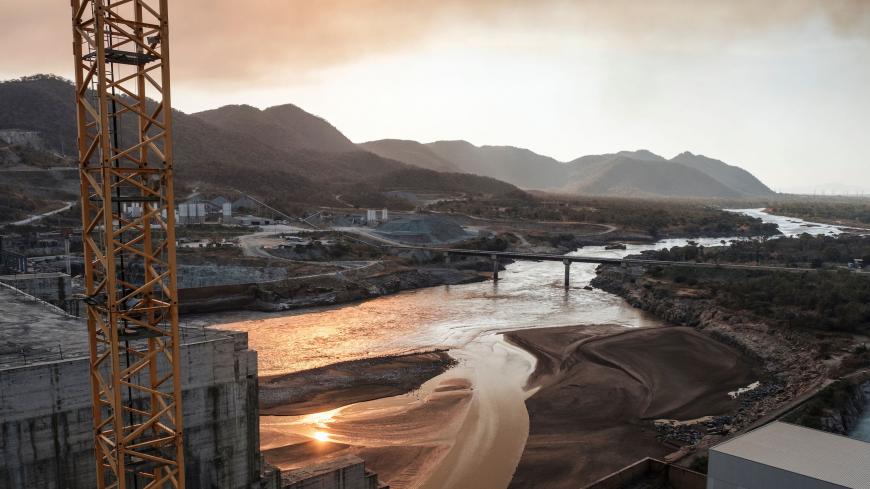 A general view of the Blue Nile River is seen as it passes through the Grand Ethiopian Renaissance Dam, near Guba in Ethiopia, on Dec. 26, 2019. - EDUARDO SOTERAS/AFP via Getty Images

Ethiopia reportedly started filling its controversial mega dam on the Nile River today though no agreement has been reached with Egypt and Sudan. The unilateral action is sure to exacerbate tensions between Ethiopia and the two countries, as both Egypt and Sudan have made their staunch opposition to the move clear.

Ethiopia's public broadcaster, the Ethiopian Broadcasting Corporation, reported that the filling of the dam on the Blue Nile River began today, citing the Ministry of Water, Irrigation and Energy. Reuters also reported the dam is filling based on Minister of Water Seleshi Bekele’s comments on television.

Later, however, Bekele denied the report, saying that "pooling" took place in the dam today due to heavy rainfall.

Ethiopia started building the Grand Ethiopian Renaissance Dam in 2011. It is a giant hydroelectric dam on the Blue Nile River, which flows into the Nile. Ethiopia wants the dam to provide energy to the country and help lift it out of poverty. Upstream nations Egypt and Sudan believe filling the dam will dangerously deplete the river's water level in their countries. The river and its tributaries play a major part in the east African economy.

The latest round of negotiations between the three countries ended without an agreement yesterday.

“Although there were progresses no breakthrough deal is made,” Bekele tweeted yesterday.

Ethiopia’s Ministry of Foreign Affairs said in a statement today that the “unchanged stances and additional and excessive demands of Egypt and Sudan prohibited the conclusion of this round of negotiation by an agreement.”

Years of negotiations have failed to produce an agreement, despite recent months of talks observed by South Africa, the African Union, the European Union and the United States.

Ethiopia has long said it planned to start filling the dam in July. It is possible the news has caught Egypt and Sudan by surprise, however. In a statement yesterday, Egypt’s Ministry of Water Resources and Irrigation said the countries would submit reports on the latest round of talks to the African Union in preparation for a future summit. The state-run Sudan News Agency also reported on an expected summit yesterday.

There were immediate effects of the reported filling on the Sudanese section of the Blue Nile, according to Sudan's Ministry of Irrigation and Water Resources. The ministry recorded that water levels in the river went down by 90 million cubic meters (more than 3 billion cubic feet) at a station today, according to a press release.

Egypt also said this month that it is willing to partner with Ethiopia on electricity projects in an effort to break the stalemate.

It is unclear how Egypt and Sudan will react now. The UN Security Council heard the three states' arguments on the issue late last month. The body usually deliberates on conflict-related issues. Egypt called the filling of the dam “a threat of potentially existential proportions” at the meeting, indicating the high level of opposition from Cairo. An Ethiopian military leader said, ”Egyptians and the rest of the world know too well how we conduct war” before the UN meeting.

Update: July 15, 2020. This article was updated to include comments by Minister Bekele denying that Ethiopia was filling the dam.