The crisis of the Grand Ethiopian Renaissance Dam, which Ethiopia is building along the Blue Nile, has sparked the concern of Egypt and Sudan, as mediation efforts led by the African Union to reach an agreement are on the brink of faltering, just like previous efforts. 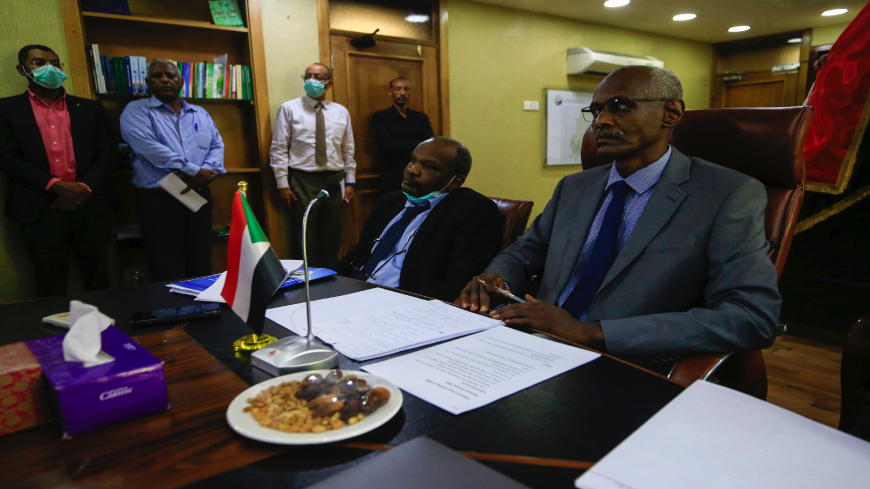 Sudan's Minister of Irrigation and Water Resources Yasir Mohamed (R) takes part in a video meeting at the ministry in Khartoum on June 9, 2020, over the Grand Ethiopian Renaissance Dam. - ASHRAF SHAZLY/AFP via Getty Images

The United Nations Security Council reviewed on June 29 the developments of the Grand Ethiopian Renaissance Dam (GERD), which Ethiopia is building along the Blue Nile, after a decade of deadlock in negotiations. During the meeting that was held via videoconference upon Egypt’s request, the council members called on Egypt, Ethiopia and Sudan to engage in negotiations to reach an understanding under the African Union (AU) brokerage.

Egypt had asked the Security Council on June 20 to intervene to resume talks over the GERD dispute. Shortly after, on June 25, Sudan addressed a letter to the council in line with the Egyptian stance. The two countries complained about Ethiopia’s unilateral decision-making, including its intention to start filling the dam reservoir before an agreement is reached.

Egypt is concerned about the possible negative impact of the dam on its annual share of Nile water, which it relies on to meet over 95% of its freshwater needs. Around 85% of Nile water comes from the Blue Nile, on which the GERD is being built at a cost of $4.6 billion. Ethiopia considers this project vital to develop its economy and save millions from poverty.

Sudan sees some GERD benefits in organizing the Blue Nile water and making use of the electricity generated from it. Still, it wants guarantees regarding the dam’s safe and convenient operation to ensure the safety of its own dams, including the largest Sudanese dam known as the Roseires Dam.

Egyptian Foreign Minister Sameh Shoukry said at the June 29 Security Council meeting that filling and operating the dam unilaterally, without an agreement, will increase tensions and might stir crises and conflicts threatening the stability of an already-troubled region.

Shoukry noted that Egypt had submitted a letter to the Security Council to ensure that Ethiopia would not take unilateral measures in filling and operating the dam, adding that the bill does not aim to undermine the negotiation process or jump to conclusions.

Ethiopia’s UN Representative Taye Atske Selassie criticized in his speech before the council the step to refer the GERD crisis issue to the Security Council. He called on the council to let the matter take its course with the AU. He also vowed that his country would not harm Egypt or Sudan.

Sudan’s UN representative Omer Siddig, for his part, urged the leaders of the three countries to show their political will and commitment to resolve the few remaining issues and ratify the agreement. He asked that any party taking an action that would obstruct the AU efforts be deterred.

Mediation efforts led by South African President and current Chairperson of the AU Cyril Ramaphosa rekindled hopes temporarily of a possible satisfactory agreement over the GERD during a videoconference June 26, which the Egyptian, Ethiopian and Sudanese presidents attended.

During the virtual emergency African summit, all three presidents agreed to return to the negotiation table to reach an agreement within two to three weeks.

The AU also announced after the summit the formation of a committee, made up of representatives of the three countries and South Africa and technical figures from the AU, who will participate as observers to contribute to resolving the pending legal and technical issues.

The committee will have a week, as of June 27, to submit its first report about the negotiations to the AU head.

The three countries vowed during the summit not to make any statements or take measures that would jeopardize or complicate the AU-led negotiations.

However, these promises did not last long. An altercation broke out between Shoukry and Selassie before the Security Council meeting when Selassie accused Egypt of being stiff in the negotiations. Shoukry rejected the accusations.

William Davison, senior analyst at the International Crisis Group, objected to the internationalization of the GERD crisis by resorting to the Security Council. He told Al-Monitor via email, “Escalating the crisis might deepen Ethiopia’s resolve not to make any concessions and to proceed with filling the dam early July, as scheduled.”

Still, Davison hopes the increasing international focus on the GERD and the intervention of the AU as mediator will revive negotiations and reach a middle ground on the pending technical and legal issues.

The intervention of the AU was a ray of hope to stop the hostile discourses that culminated in military threats. Diplomatic tensions had also been escalating between Egypt and Ethiopia over the GERD after the failure of the latest negotiation round in mid-June that was spearheaded by Sudan and brokered by the United States, South Africa and the European Union. The outcome was a draft agreement that Sudan said “achieved great progress on key technical issues.”

Nevertheless, there is a list of unresolved technical issues, including the operation method of the dam during the years of drought, when rain level is low and during which water supplied by Ethiopia to the downstream countries will be scarce. Also, there are some legal matters related to whether the agreement and its mechanism to solve disputes must be binding for parties, which is what Egypt is demanding.

Based on Egypt’s request in 2019, the United States tried to act as mediator, thus leading to talks that lasted four months in Washington before collapsing in February. Ethiopia refused to sign the agreement and accused the Donald Trump administration of being biased to Egypt.

During his speech before the June 26 African summit, Egyptian President Abdel Fattah al-Sisi said his country is open to a balanced and fair agreement that would allow Ethiopia to achieve its desired economic development and increase its power-generation capacity, all the while minding the interests of Egypt and Sudan and not harming their water rights.

Sudanese Prime Minister Abdalla Hamdok said at the summit that the African leaders are wise and capable enough to solve their issues themselves.

Cairo and Khartoum released two official statements following the African summit June 26 regarding an agreement with Ethiopia to delay filling the GERD reservoir until an agreement among the three is reached.

But Ethiopia announced the day after the summit that it would start filling the reservoir within two weeks, while construction works are ongoing. It vowed to try to reach a final agreement with Egypt and Sudan during this time. Ethiopia did not mention delaying filling the dam in a statement issued by the prime minister’s office June 27, and it stuck with the timeline it had announced earlier — beginning of July.

Davison hopes that tripartite negotiations under AU brokerage will not be obstructed due to the dam-filling matter. He said, “This issue must not prevent the negotiations from focusing on key pending matters.”

However, Davison expects the negotiations to collapse if Ethiopia moves forward with filling the dam before agreeing with Egypt and Sudan. He noted, “Relations between Ethiopia and the two downstream countries might go downhill and fuel further regional instability.”