The number of kites in the skies over Egypt has increased recently, and some consider this a potential threat to the country's national security. 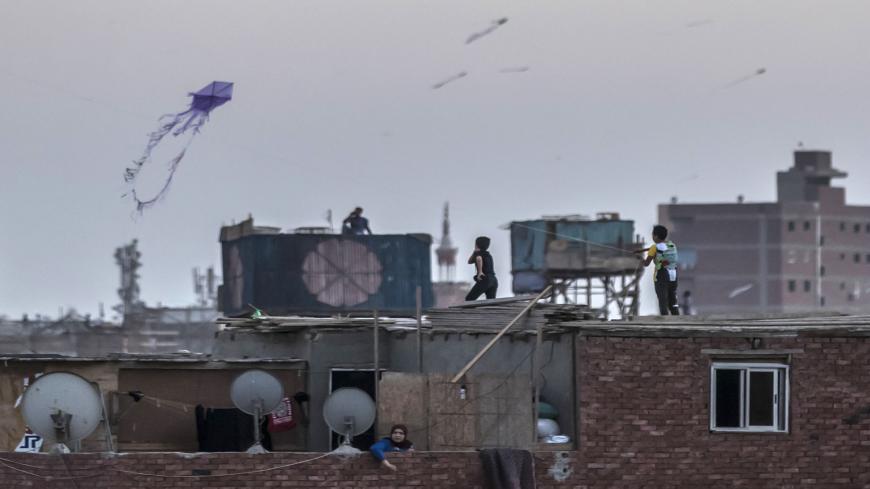 Kite flying has helped Egyptians escape from the stress caused by the outbreak of the coronavirus. However, some believe that this fun pastime could pose a threat to the country's national security.

Khaled Abu Taleb, a member of the parliamentary Defense and National Security Committee, recently proposed a request to brief the prime minister about the danger of kites on the national security, as they may be equipped with surveillance cameras to photograph important installations.

Abu Taleb noted that kites in the past were just toys for children, but today with the technological development they have become a threat to the lives of children — and to the national security. Following his request, Abu Taleb has faced much criticism on social media with many people saying that he is making a mountain out of a molehill.

“I faced an extraordinary attack on social media, but it's OK. My message is to warn people of the risks and I accept criticism,” he told Al-Monitor. “National security is not just about the army and the police. There is also food, health, educational and environmental security, and saving people’s lives is also a national security issue.”

After the scorching sun has decreased in intensity, children and young men fly their kites on rooftops, in the streets or by the sea in cities all over Egypt. Recently, the sale of kites has become a profitable business, and street sellers around the country are now selling kites. Carpenters, who have been severely affected by the coronavirus outbreak, have started making and selling kites; workshops are available for those wanting to make their own kites.

In the upscale district of Nasr City in Cairo, Mahmoud Reda, a street seller, now offers for sale his handcrafted plastic and wooden kites. He used to sell children's toys, but due to the health crisis, he shifted to selling kites.

“Many people stopped buying children's toys from the street because they fear it is not clean. So I decided to make and sell kites, which has been a great success,” Reda told Al-Monitor. “Every year sellers used to sell kites for only 45 days at the beginning of summer; however, due to the lockdown [which was imposed in Egypt in March and eased last week] and the coronavirus crisis, we have been selling kites for over three months now.”

A kite costs between 30 Egyptian pounds ($1.85) to over 500 pounds ($31) depending on size and decorations. Small kites have a width of about 30 centimeters (12 inches) while the largest kites can reach up to 3 meters (10 feet). Some kites are equipped with led lights to make them light up at night, and others have famous figures or characters printed on them, which adds to their cost.

But according to local news outlets, the kites have caused deaths and fatal injuries in children in different cities, either through electrocution, falling from rooftops or drowning.

“Flying kites is a very enjoyable pastime, but some kite flyers challenge each other and this may cause problems. They should be careful and children should be accompanied by older relatives,” Magdy Maher, who is a carpenter turned kite maker for this season, told Al-Monitor. “Bad things happen everywhere, but kites should not be banned just because it caused a few incidents. Car accidents kill hundreds of people every year,” said Maher, who sells at least five kites per day.

However, Abu Taleb’s fears go further than that. He said that technology in kites could harm the country's national security. “I don’t want to criminalize kites; I want to warn people against some practices. Some people may attach modern and small-sized cameras to the kites to photograph vital installations,” he noted. “The issue is important even if some people ridicule it. We should think about every probability.”

He said that some countries like Turkey and Pakistan have banned kite flying, and even the United Kingdom has some restrictions on kite flying. “All those countries know the dangers of kite flying. Why do some people want us to forget about it,” Abu Taleb added.

Disagreeing with Abu Taleb, Eman Nader, who recently bought two small kites for her two daughters, said kites should not be an issue that is discussed in the parliament. “It is just fun and I have enjoyed flying them since I was young. Now that many other people are flying kites, it encouraged me to buy them for my two daughters; we fly them from our terrace,” Nader told Al-Monitor. “Of course, I keep an eye on them — this is common sense,” she added.

But Abu Taleb said that while people see the issue as trivial, he is looking to the future. “If today people see it as fun, in the future some people with evil intentions may use children or young people for illegal deeds by asking them to photograph special places,” he noted.

He added, “The government should take care of this and should raise awareness against the dangers of kites, by holding sessions and lectures at cultural centers and youth centers to help children and families understand the risks of kite flying."