Yemen’s Houthi movement introduced a bylaw stipulating that citizens pay an obligatory tax to the purported descendants of the Prophet Muhammad, raising the ire of opponents who argue that such a move promotes racism and classism in Yemeni society. 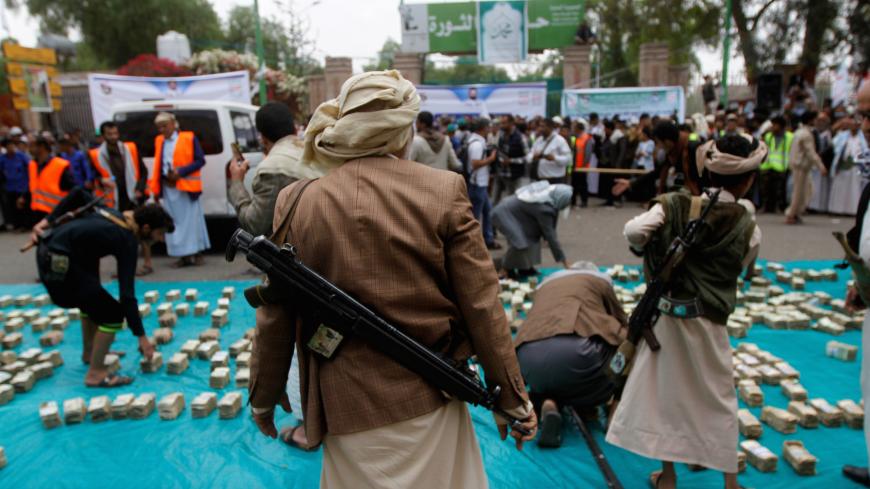 Yemen’s Houthis continue to tighten their grip and propagate their ideologies in territories under their control. The Houthi rise over the last five years would not have happened if they had focused on the military domain alone. Their policies have been comprehensive and they have been active at the social, political and ideological levels. All their activities have one target: to consolidate their rule and eliminate any opposition.

In the areas falling under the Houthis’ control, any decision they make or laws they introduce will be unopposed by the population. The latest bylaw on "zakat," an obligation (tax) that constitutes one of the five pillars of Islam, is a case in point. A long document has been released, stipulating that citizens should pay "khums," a 20% tax on economic activities and natural resources including oil, gas and fishing industry. The document, which was signed by Houthi President Mahdi al-Mashat in late April, states that khums should be distributed in six ways:

The Houthis have based their new bylaw on a verse from the Quran, which they interpreted to benefit their own. The verse states, “And know that whatever spoils you take as booty of war, a fifth thereof is for Allah, and for the Messenger and for the kinsmen (in need) and orphans and the poor and the needy traveler.” (Surah Al-Anfal [8:41])

Shamsan Abu Nashtan, head of the Zakat General Authority, told Al-Masirah newspaper June 9 that the bylaw is not new and was first issued in 1999. “We have not changed anything in it,” he said. “Raising this matter … comes in the context of targeting the Zakat General Authority and its activities that have contributed to mitigating poverty that has been caused by the aggression and the blockade,” referring to the five years of airstrikes and blockade on Yemen by the Saudi-led Arab coalition.

While the Houthis contend this bylaw is in conformity with the Yemeni law and Sharia, opposing voices have said such an illegal move is racist and it legalizes discrimination among Yemenis. Such a bylaw would give the Hashemites the right to collect money from citizens on the basis of family origin, a matter many believe contradicts the Yemeni Constitution that states all people are equal in rights and obligations. Officials in the United Nations-recognized government have described this Houthi bylaw as “unconstitutional.”

On June 8, Prime Minister Maeen Abdulmalek Saeed took to Twitter denouncing the Houthi bylaw, writing, “The Houthi release of what they have called the zakat law is based on racial and dynasty discrimination and unveils the extent of the group’s deep involvement in ripping apart the social fabric and its rejection of the equal citizenship values. It also explains the degree of its disdain toward the [Yemeni] people and all peace opportunities and calls.”

The Houthi bylaw has roused the ire of opponents on social media platforms with angry, cynical and condemning comments. Minister of Information Moammar al-Eryani described the bylaw as the “worst example of racial discrimination in the modern age.”

Political observers see the Houthi bylaw as a reflection of their ideology, or what the Houthis say is their divine right to the ruling. Nabil al-Bokairi, a Yemeni researcher focusing on politics, told Al-Monitor, “We should not be surprised to see the Houthis introduce such a law. This law legalizes a racial idea that they already possess. The bylaw makes it clear that there [is a difference between] Bani Hashim [Hashemite] and other Yemenis, and both have different rights.”

The Houthis, who hail from Saada province, seized the capital Sanaa in September 2014, and they rapidly extended their military presence in many provinces, capitalizing on the fragile state and conflicts among the political parties on the heels of the Arab Spring uprising against the former regime.

Adel Dashela, a Yemeni researcher and writer, told Al-Monitor that the Houthi bylaw is undermining equality in society and makes classism worse. “The aim of this bylaw is to spread their ideas [of] 'racial superiority' among the youth. This bylaw reminds us of apartheid in African countries, racism in Western societies and the caste system in India.”

However, Dashela thinks the new bylaw introduced by the Houthis could be an impetus for unity among Yemenis who oppose the Houthi dogma. “Yemenis will not allow the pillaging of people's money by these racist militias,” he noted.

Although the bylaw has sparked a storm of controversy and infuriated the bulk of Yemenis who are not Hashemite, Dashela said this decision by the Houthis will not push people in Houthi-controlled areas against the Houthis under the current circumstances.

Abdulla Mahdi, a Sanaa resident, told Al-Monitor that it is dangerous to display opposition to the Houthi authorities or criticize them at present. “Whatever laws the Houthis make, the population is silent. They [Houthis] have been capable of combating the Yemeni government and the Saudi-led Arab coalition for five years, and they can easily punish all dissidents in areas they control,” Mahdi said.