Turkey ignores its own record, denouncing press clampdown in US protests

Turkish officials have denounced the crackdown on journalists in the United States, drawing criticism given Ankara's own record on press freedom. 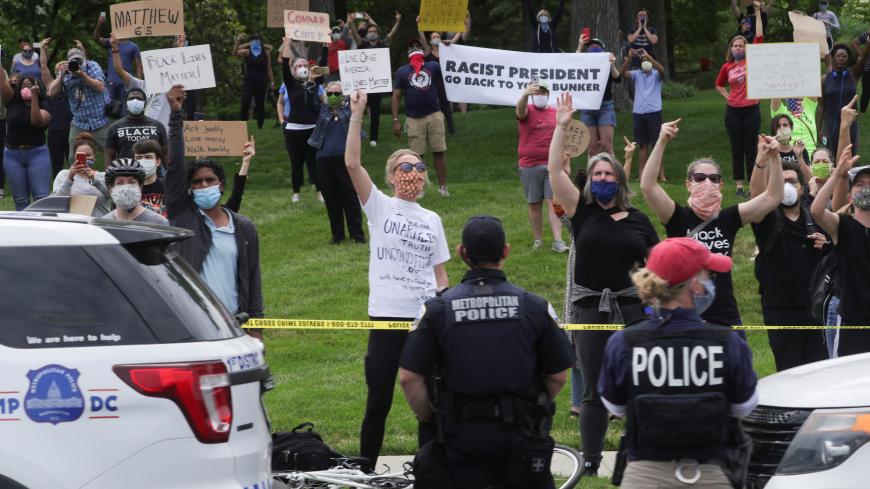 Crowds of angry protesters line the motorcade route as seen from inside US President Donald Trump's motorcade as he travels through Washington to visit the Saint John Paul II National Shrine as protests continue over the death in police custody of George Floyd, in Washington, US, June 2, 2020. - REUTERS/Tom Brenner

As violent protests triggered by the murder of an unarmed African American man, George Floyd, by a white police officer on May 25 continue across the United States, American and foreign journalists are being targeted by police. Members of Turkey’s state-run TRTWorld news channel were among them. Sally Ayhan, the Washington correspondent of the outlet, was struck by rubber bullets while covering events there. Fellow correspondent Lionel Donovan was similarly injured in his groin while reporting on demonstrations in Minneapolis where Floyd was slain.

The news prompted an angry response from one of Turkish President Recep Tayyip Erdogan’s top aides. Fahrettin Altun, head of Erdogan’s communications team, aired his ire via Twitter, saying he condemned the attack against Donovan “in the strongest possible terms.” Altun added that “press freedom is the backbone of democracy. I will raise this issue with the relevant US officials without delay.”

“Thank you for your support,” responded Ayhan, though she didn’t feature in Altun’s tweet.

Many others greeted his opprobrium with mirth. “If anyone asks you ‘How many journalists do you have in jails now in Turkey?’ Or ‘How many newspapers and television stations did you close in the last four years?’ Do you have an answer?" tweeted a certain Mehmet Kurt.

The Parliamentary Assembly of the Council of Europe said in a May 22 report that there were 95 journalists imprisoned in Turkey, more than in any country in the world, a distinction Turkey has preserved for several years running. On May 8, for example, an Istanbul court charged seven journalists with violating the country’s intelligence laws for reporting on the death of a Turkish National Intelligence Agency asset in Libya, where Ankara has intervened militarily on the side of the internationally recognized Government of National Accord.

Six of the journalists are in prison and face up to 17 years if convicted of revealing state secrets. A seventh has eluded jail because he is in Germany. A trial date has been set for June 24.

News of the operative’s death was publicized by a member of the Turkish parliament in late February after two of the journalists disclosed the dead officer’s name on Twitter.

Another newsman, Fatih Portakal, was charged on April 30 with breaching Turkey’s banking laws when he suggested in a tweet that the financially stretched government was dipping into savings at private banks for relief. The popular news anchor for Fox News’ local franchise Fox TV faces up to three years should his sentence be upheld.

What was especially egregious for many about Altun’s finger wagging is that he is at the center of the government’s most recent bout of muzzling of the secular opposition’s flagship title, Cumhuriyet. Terror investigations were launched against three Cumhuriyet journalists in April for a story in which they investigated charges that Altun had illegally erected a gazebo on a plot of land adjacent to his house in Kuzguncuk, a trendy village on the Asian side of the Bosporus. The gazebo was demolished by the Istanbul municipality, which was wrested from Erdogan’s Justice and Development Party in a June 30 rerun last year.

The journalists were accused of exposing Altun to terrorist attacks by publishing the whereabouts of his house.

Cumhuriyet was slapped with a fine, depriving the paper of publishing government tender notices for three months. The advertisements are a big source of income for the media. Cumhuriyet has also been ordered to publish a retraction on its front page for three days running, with the first appearing yesterday.

Berating other countries for the same abuses Turkey showers on its own citizens is by now standard for Erdogan and his vast propaganda machine.

The protests in the United States provide fresh opportunities “to both condemn America and, in doing so, implicitly justify Turkey’s own police brutality and crackdown on the press,” said Nicholas Danforth, a fellow at the Wilson Center’s Kennan Institute. Danforth observed in emailed comments to Al-Monitor, “At the same time some pro-government voices are presenting the protests as a backlash to America’s longstanding racism, others are suggesting they are actually a FETO/PKK-backed deep state conspiracy to unseat Trump.”

FETO refers to the so-called Fethullah Gulen Terror Organization that is allegedly led by Sunni cleric Fethullah Gulen. The Pennsylvania-based Turkish preacher is accused of masterminding the failed 2016 coup to overthrow his former ally, Erdogan. The PKK (Kurdistan Workers Party) is the Kurdish militia that is fighting the Turkish army for self-rule in the predominantly Kurdish southeast. Erdogan and his acolytes support Trump because of his perceived affinity for the Turkish president, which saw US troops withdraw from northern Syria in October, allowing Turkish troops to move in against the PKK’s Syrian franchise that is backed by the Pentagon.

For them, the protests in the United States present “a chance for trolling, whataboutism and outreach to the White House, all rolled into one,” Danforth concluded.