Intel: US pledges nearly $700M in humanitarian assistance for Syrians

The US State Department announced it would be providing an additional $696 million in humanitarian assistance to Syrians. 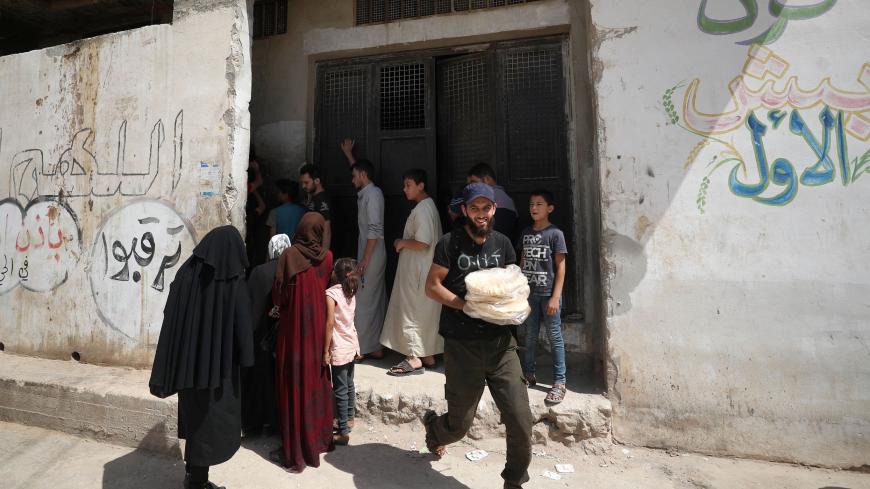 Syrians buy bread in the town of Binnish in the country's northwestern Idlib province on June 9, 2020. - OMAR HAJ KADOUR/AFP via Getty Images

The US State Department announced today that it would be providing an additional $696 million in humanitarian assistance for Syrians, bringing its total contribution since the start of the war to more than $11.3 billion.

“The international community, both traditional and new donors, must remain committed to meeting the growing needs of the Syrian people, a responsibility the Assad regime has proven unwilling to uphold,” US Secretary of State Mike Pompeo said in a statement.

At a virtual pledging conference co-hosted by the European Union today, the United Nations appealed for $10 billion in aid to support Syrians and the countries hosting them. The UN estimates more than 5.6 million people have fled Syria since the uprising began in 2011.

Why it matters: The fundraising push comes as Syria’s already-gutted economy teeters on collapse. After nearly a decade of war, relentless Western sanctions and financial turmoil in neighboring Lebanon, the currency has fallen to record lows this summer.

Basic goods and medicines are increasingly out of reach for Syrians, more than 80% of whom live below the poverty line. The coronavirus pandemic has taken a toll on supply chains, and food prices have soared by more than 200% in less than a year.

President Bashar al-Assad, having cemented control over roughly two-thirds of Syria, now faces the immense challenge of rebuilding the country with little help from the international community. The United States and European powers have stressed that reconstruction cannot happen without a lasting political solution — a nonstarter for Syria’s longtime dictator.

“We are at a critical juncture,” the US special representative for Syria engagement, Ambassador James Jeffrey, said today. "Together the international community must stand firm, that there will be no diplomatic nor economic normalization of the Assad regime until there is a political solution to the conflict."

Sweeping US sanctions under the Caesar Act could choke off the regime’s access to the billions of outside dollars it needs to rebuild. The new authority, which took effect earlier this month, allows for sanctions on foreign companies or persons doing business with Damascus, specifically in the construction, engineering, energy or aviation sectors.

The regime has slammed the new sanctions campaign as “economic terrorism,” but the United States maintains that the Syrian government’s own actions are responsible for the current financial crisis.

What’s next: The situation in Idlib province, where a Russian-backed campaign displaced over a million people earlier this year, is especially bleak. At least 70% of the population requires humanitarian assistance, the UN estimates.

Ankara and Moscow, which support opposing sides of the war, brokered a cease-fire in March that paused the bloodshed in Idlib. On Wednesday, the presidents of Russia, Turkey and Iran — the trio of countries that make up the so-called Astana group — will discuss the situation in Syria during a video conference, a Kremlin spokesperson announced.

Know more: The UN Security Council faces a July 10 deadline to vote on renewing cross-border aid deliveries to civilians in Syria. Amberin Zaman has the inside story on efforts to lobby Assad’s main patron on the council, Russia, to reauthorize the Yarubiyah crossing to Syria's northeast.