As the newly-formed Oman Investment Authority takes over most of the Gulf country’s public assets, questions arise as to whether this is streamlining the administration, economic reform or power consolidation? 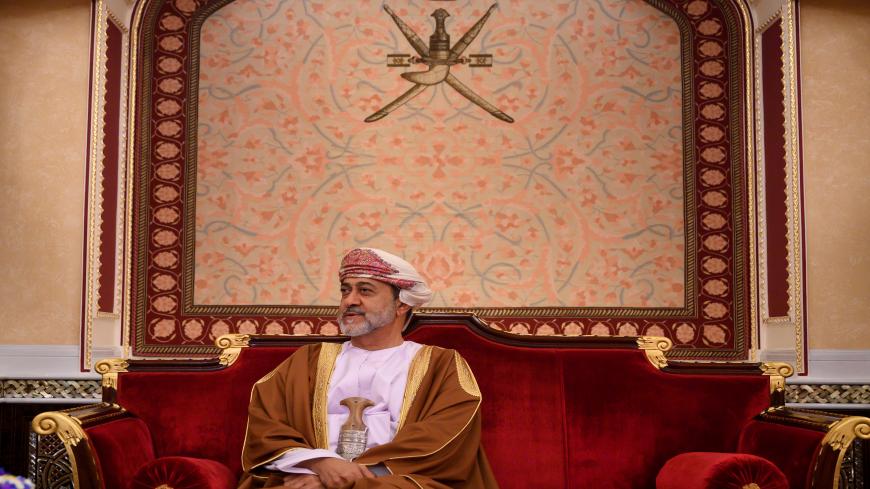 Following his ascent to the throne in January, Sultan Haitham bin Tariq Al Said pledged to “revise the work of government companies, with a view to upgrading their performance and efficiency.”

Announced on June 4, the Oman Investment Authority (OIA) will cluster all government companies, with the exception of Petroleum Development Oman, and take over $17.7 billion worth of assets currently held by the sultanate’s sovereign wealth funds.

"We could absorb 66 state-owned entities," a source at the investment vehicle told Al-Monitor on condition of anonymity. The move might also trigger a change of attitude in those companies by "exiting a public servant mindset and the stranglehold of the Ministry of Finance," the source said. Experts believe it could also minimize improper use of resources.

“The effective control on the management of those companies may remain well in the hands of the government,” commented Fabio Scacciavillani, former chief strategist at the Oman Investment Fund — one of the sovereign wealth funds merged with the OIA.

According to him, the merger of Oman's sovereign wealth funds de facto took place a few years ago. “All decisions were already centralized, so the merge appears as the final legal step to streamline the administration under one entity,” Scacciavillani told Al-Monitor.

According to independent Gulf researcher Nabeel Nowairah, the OIA will "help in reducing bureaucracy and become the investment facade of Oman under one umbrella."

Since the 2014 oil bust, the Gulf country has been caught off guard by a spike in public debts, expected to average 85% of the gross domestic product (GDP) over 2020-22, according to World Bank estimates.

“The OIA will consolidate public assets and strengthen Oman’s position when seeking loans or collaterals. A more solid sovereign wealth fund provides the government with higher hand in negotiations,” an Omani political economy analyst close to the matter told Al-Monitor on condition of anonymity.

According to information obtained by Bloomberg, Oman has discussed financial support from Gulf countries at a time the country’s neutral orientation faces growing pressure.

The sultanate is emerging as “an increasingly vulnerable spot in the region,” the Institute of International Finance said. Due to the coronavirus pandemic and falling oil prices, the annual budget deficit is expected to balloon to 16.9% of GDP this year.

The new entity also provides the Omani government with a better understanding of the intrinsic value of assets it owns, the analyst said. “This way they can develop a plan for how to manage the nonproductive assets. For the government, it means a better balance sheet,” he added.

Talking to Al-Monitor on condition of anonymity given the sensibility of the matter, a former Western diplomat believes Haitham is gradually "discovering how indebted and stressed the Omani financial system is and looking for tools to do something about it."

At this stage, the OIA "cannot conduct any media activity," a spokesperson for the OIA told Al-Monitor.

Some assume a fund could facilitate privatization deals. Following the sale of a 49% stake in Oman Electricity Transmission Co. to a Chinese state-owned company in 2019, Al-Monitor wrote that "the sell-off has begun," as the government tries to find alternate fundings.

The privatization of Oman’s aviation sector has been studied. “Before the end of this year, we will have a clear picture,” the CEO of the Oman Aviation Group said in March.

Design privatization plans will be “much easier now” given the OIA’s cost-effectiveness mindset, the analyst said, adding that “no official plans for OIA-led privatizations are currently underway.”

“At this juncture, it is hard to fathom whether there is a serious intention to privatize some publicly owned companies. The consolidation of government assets under the OIA does not imply a definitive course of action,” Scacciavillani said, noting that in any case, prospective buyers will be inclined to beseech, as part of the deal, a regulatory framework in line with international best practices.

The formation of the OIA should also be viewed as “a process of power consolidation” to put together structures responsible to Haitham, the former diplomat said.

The board of directors of the new entity shall be formed under a royal order, the decree mentioned. On June 8, Haitham appointed the executive president of the State General Reserve Fund, Abdulsalam al-Murshidi, as the head of the OIA.

“I think there is some unhappiness with the way the Ministry of Finance is operating,” the former diplomat added.

Contacted by Al-Monitor, a spokesperson for the Ministry of Finance declined to comment and referred to OIA representatives.

A day before the new sovereign wealth fund was announced, Haitham ordered the establishment of a "special office" reporting to him directly to oversee government bodies.

Scacciavillani underscored that the Omani ruler sets the overall policy objectives — “hence the OIA will be entrusted with the implementation of decisions taken at higher political level,” he concluded.