Libya's Government of National Accord hosted an Italian delegation in the capital today. 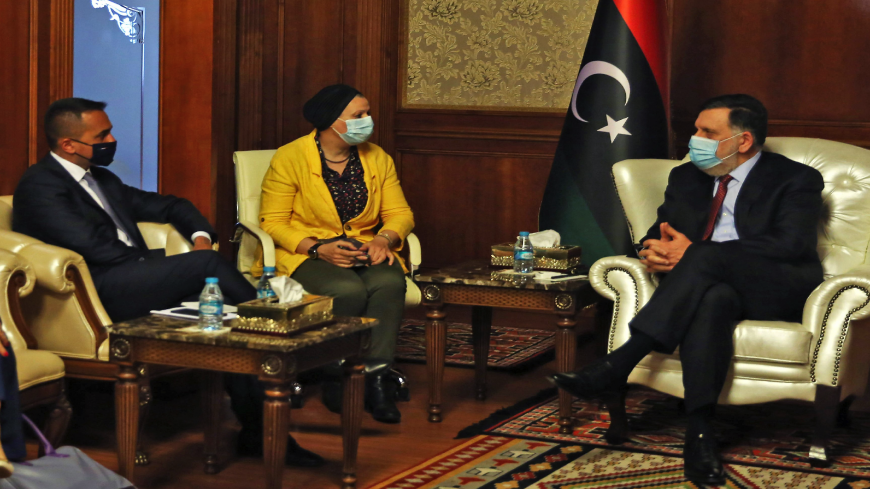 Fayez al-Sarraj (R), Prime Minister of Libya's UN-recognized Government of National Accord (GNA), meets with Italy's Foreign Minister Luigi Di Maio (L) in the Libyan capital Tripoli on June 24, 2020, while clad in masks due to the COVID-19 coronavirus pandemic.

Di Maio came to the embattled country to meet with Libyan leaders and discuss the situation there, according to a GNA statement.

The GNA controls the capital city of Tripoli and much of the northwest, while Gen. Khalifa Hifter’s self-styled Libyan National Army (LNA) controls the east and a lot of the rest of the country. Heavily backed by Turkey, the GNA has had several military victories against the LNA recently. The LNA is supported by Egypt, the United Arab Emirates, Russia and allegedly France.

In the meeting, the two sides discussed the need to reject “negative foreign interventions” in Libya. The GNA said it is necessary to continue Operation IRINI, which is a European Union effort to enforce a UN weapons embargo on Libya in an effort to reduce fighting. Both sides have reportedly violated the embargo, and Hifter’s ally Russia has expressed opposition.

The Italian and Libyan delegations also discussed migration in the Mediterranean Sea, oil production in Libya and Italy’s help with clearing mines in the country, according to the GNA statement.

Italy’s Ministry of Foreign Affairs confirmed Di Maio visited Libya for a meeting. In a statement to reporters, Di Maio said Italy supports avoiding further escalations in Libya that would affect Italy. “Libya is a priority for our foreign policy and national security,” he said.

Italy is friendly with the GNA and has also shown recent support for Turkey’s actions in the area. This month, Italy and Turkey participated in a joint naval drill in the Mediterranean Sea. Italy’s neighbor France, on the other hand, is closer to Hifter.