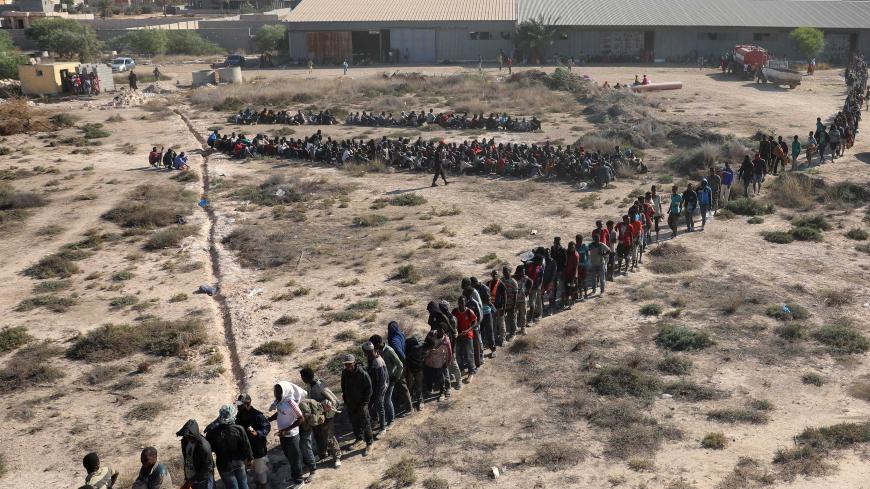 Migrants wait to be transported to a detention center in the coastal city of Sabratha, Libya, Oct. 7, 2017. - REUTERS/Hani Amara

A series of shortcuts undertaken by the Italian government in Libya to stop migration flows in recent months has had serious repercussions. Earlier in October, the human smuggling hub of Sabratha erupted in battle between warring militias as a direct result of Italy’s interference in Libyan domestic affairs.

The origin of the battle can be traced back to the summer, when Italy allegedly started paying militias to halt human smuggling. Italian government figures deny these claims despite widespread reports to the contrary. Working through the UN-recognized Government of National Accord (GNA) of Fayez al-Sarraj, the Italians funded the Martyr Anas al-Dabashi militia, commonly known as al-Ammu's militia (the uncle’s militia), and Brigade 48, according to these reports.

Libya has been a fractured state since the 2011 civil war that overthrew Moammar Gadhafi. Today, the state has two large ruling forces with Sarraj in the west and Gen. Khalifa Hifter’s Libyan National Army (LNA) running the east. The two figures are competing for legitimacy in Libya and from international actors. Under Italian Prime Minister Paolo Gentiloni, the country has primarily worked with Sarraj. But at the same time, there is ambivalence in its actions as it has ramped up its relations with Hifter.

“[Italian Interior Minister] Marco Minniti and his colleagues have been smart, from their own selfish perspective,” Jalel Harchaoui, a doctoral candidate in geopolitics at Paris 8 University and a frequent commentator on Libyan affairs, told Al-Monitor. “Their strategy has not hesitated to make use of several contending actors in Libya. From the perspective of Libyans, however, there has been destruction, suffering and mayhem since mid-September, triggered by Italy’s interference in northwestern Libya — this reality must be recognized,” he said.

In August, the number of boats reaching Italian shores decreased considerably thanks to Italian funding going to militias attempting to stifle migrants and refugees leaving Libyan shores. But it was an attempt at a quick fix from Italy, as hundreds, if not thousands of migrants and refugees became stuck in eastern Sabratha under terrible conditions, while tensions simmered between human smugglers and the militias suppressing the smuggling.

After a month of suppressing human smuggling, the al-Ammu militia allegedly clashed with smugglers trying to move boats filled with aspiring travelers.

“Pushed by the European Union and Italy, the GNA in Tripoli granted legitimacy to Brigade 48 and al-Ammu. And their rivals — [a group called] the Operations Room and al-Wadi — deemed that unacceptable,” Harchaoui said, noting that “the LNA provided military help.”

On Sept. 17, a paramilitary force attacked al-Ammu’s militia, kicking off a battle that left nearly 100 people dead and many more wounded in addition to the destruction of houses and other vital infrastructure. The LNA-backed Operations Room now controls Sabratha.

And now, a couple of weeks after the conclusion of a battle that dragged in all of Libya’s major actors, analysts say Italy’s troubling influence may have further destabilizing effects on Libya.

Harchaoui added, “What I expect in the coming weeks is a backlash from all those anti-Hifter factions once they have regrouped and merged forces. I expect ugly battles in that same area between Ras Jdir and Tripoli, perhaps along the littoral or perhaps further inland, in the Nalut district. It is not going to be an uninterrupted series of rosy victories by the LNA, I don't think so.”

Italy will likely continue to work with both the GNA and LNA, looking for the simplest solutions to complex problems. Italy is set for parliamentary elections in 2018, and immigration is the leading issue for the nation.

The battle in Sabratha stemmed from the Italian government’s attempts to curtail immigration, and despite the destruction and loss of life, it may still be a political victory for a group of politicians and parties who seemingly have little interest in the life or well-being of refugees and migrants.

“The coming weeks will tell whether the new group in control of Sabratha is effectively curtailing the flows,” Mattia Toaldo, a Libya expert and policy fellow at the European Council on Foreign Relations, told Al-Monitor.

He explained, “Last year, October was one of the months with the highest flows, and so far 3,000 [people] have already arrived.”

“For Italy, moderate flows would still be OK as the government has convinced public opinion that the problem is sorted for the moment and the domestic mainstream media has not been very curious to find out why,” Toaldo said.

“The Gentiloni government works closely with the GNA not because it believes it will last, but mainly because Gentiloni is in a hurry,” Harchaoui noted. “The government in Rome is focused on delivering results on the migrant-crisis front before the elections in 2018.”

It seems a delicate peace has been ripped apart in northwest Libya. A country conflicted by sporadic battles in and around other major cities may now have a new area prone to the occasional armed conflict.

“For Libya, what happened in the last two months was the destabilization of the northwest of the country, an area so far covered by local cease-fires since the spring of 2015,” said Toaldo. “The balance has been broken. We’ll have to see if the losers will fight back."