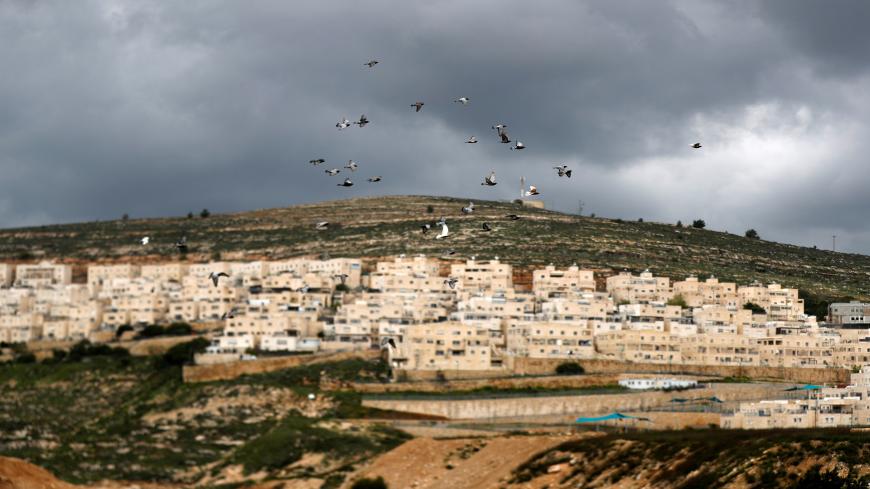 Birds fly as the Israeli settlement of Ramat Givat Zeev is seen, in the West Bank, March 19, 2020. - REUTERS/Ammar Awad

Israel’s High Court ordered June 9 the state to cancel the controversial Regulation Law, with eight justices to one ruling that the legislation was unconstitutional. The eight justices said that the law “violates the property rights and equality of Palestinians, and gives clear priority to the interests of Israeli settlers over Palestinian residents of the West Bank." The justices argued that while preventing the demolition of [settlement] homes might be understandable, this “does not justify such significant violation of property rights and the rights to dignity and equality that the Palestinian population [deserves].”

The Regulation Law enables the Israeli authorities to expropriate private lands belonging to Palestinians in favor of Jewish settlements and on the condition of compensating the Palestinian owners. Its authors aimed at retroactively legalizing over 4,000 unauthorized housing units, including some, though not all, West Bank wildcat outpost.

Adopted by the Knesset three years ago, the law generated a wave of criticism by anti-occupation and human rights groups, with several petitions submitted against it over the years. European leaders sharply criticized the law, arguing it ran contrary to international law. United Nations envoy to the Middle East Nickolay Mladenov said at the time that the law "will have a drastic legal consequence for Israel and for the nature of its democracy. It crosses a very, very thick red line."

When the first petitions were submitted against the law, Attorney General Avichai Mandelblit said he could not represent the state, estimating the law was unconstitutional. In reaction, then-Justice Minister Ayelet Shaked of the pro-settler Jewish Home party hired private lawyer Harel Arnon to defend the law in court. After a series of petitions, the government agreed to suspend the implementation of the law until the High Court publishes its final ruling on the issue.

The June 9 ruling will evidently generate wide national and international implications, especially ahead of July 1, when Prime Minister Benjamin Netanyahu is expected to bring up to vote his West Bank annexation plan. On the Israeli internal political level, public radio station Kan reported that the Likud and Blue and White party, both of the ruling coalition, disputed the reaction to the ruling, with a coalition crisis looming over the issue. The Likud party said in a statement that the ruling was "unfortunate," condemning the court’s intervention in a law “that’s important to the settlement enterprise and its future.” In contrast, the Blue and White party stated, “We respect the court’s decision and will work to ensure that it will be respected." Several right-wing activists pledged to re-present a new version of the law for the Knesset to adopt in the near future, but a Likud source was quoted as saying that once Israeli sovereignty is implemented on West Bank settlements, the law would no longer be necessary.