Chief rabbi of Iran: Israel does not represent Judaism

In an exclusive interview with Al-Monitor, Rabbi Yehuda Garami, chief rabbi of the Jewish community in Iran, explains about their daily lives and why he paid a condolence visit to the family of assassinated Gen. Qasem Soleimani. 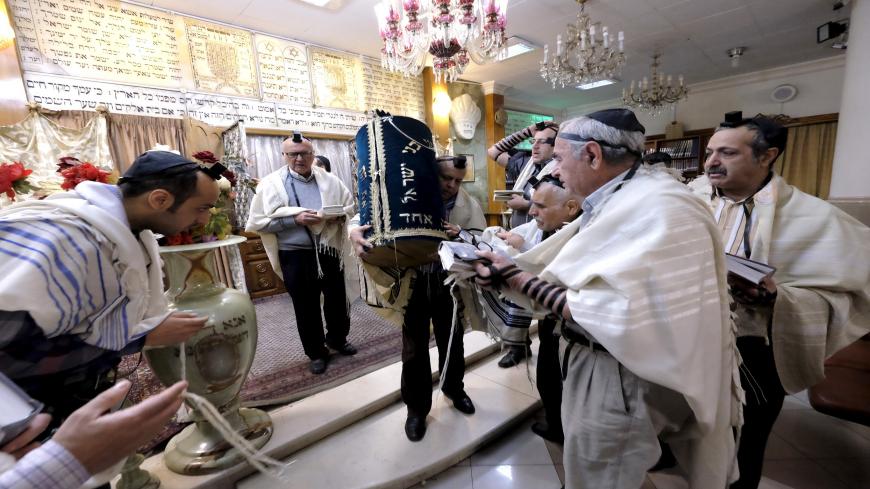 Tensions between Israel and Iran have intensified over the last few years, especially because of Iran’s activities in Syria and counteractivities attributed to Israel against Islamic Revolutionary Guard Corps targets in that country. Many are worried about the well-being of Iran’s small and isolated Jewish community. It is only natural to think that tensions between Israel and Iran could threaten it.

Al-Monitor spoke with Rabbi Yehuda Garami, chief rabbi of the Jewish community in Iran, about the state of Jews in the country in general, their relationship with the regime, as well as with the general population, and their attitudes toward the State of Israel. The basic question centered around the size of the Jewish community in Iran. Official numbers have it at around 8,000 members, but Garami claims, based on information he has, that the number of Jews is actually much higher.

“I estimate that there are between 20,000 and 25,000 Jews in the country. Most of them live in Tehran, Shiraz, Esfahan and Karmanshah, though there are other, small communities too,” he told Al-Monitor. Then he went on to discuss the state of the community, saying, “We have total freedom of religion. All the synagogues are open, and Torah classes take place there. We have all sorts of educational institutions too, including elementary and middle schools.”

According to the rabbi, Jewish religious activities take place openly, without any restrictions. He is personally responsible for providing kosher food to those groups that want it, and the kosher slaughter of meat takes place according to Jewish law. “Over the years I formed several shohets [ritual slaughters]. We even have some excellent kosher restaurants, which are under round-the-clock supervision by a kashrut [dietary law] supervisor. Because we are a small community, it is only natural that we cannot provide kosher certification services to food producers, because there is not enough demand, but every Jew knows what they can and cannot buy as far as kosher food is concerned."

Garami said that the members of the community bond over Jewish tradition, adding that there are almost no secular Jews in the country. “In Iran, there are Jews who know more Torah and Jews who know less, but everyone is traditional. All Jews observe the Sabbath, lay tefillin [phylacteries] and respect tradition. At the same time, there is also a very Orthodox community that studies Torah on a very high level and observes all the laws.”

According to Garami, the community is also organized socially and maintains various organizations intended to meet the needs of different groups. These include organizations for youths and students. And of course, there are also charitable organizations that assist needy Jews throughout the country. “We support at least 150 needy families regularly by providing them with food, and we help young couples get a start in life. There is plenty of mutual aid. We try to help everyone who needs it.”

The coronavirus pandemic and international sanctions on Iran have taken a dire toll on the country’s economy. Garami admits that the difficult situation has hurt the Jewish community as well. “It is only natural that the people to suffer most from sanctions are from the middle class. As a result, we exert an even greater effort to help them. Most Jews in the country are business owners, particularly clothing store owners, and they are part of the middle class. While there is a small minority of people [in Iran] — including a few Jews — who are wealthy and are not affected directly by the sanctions, most people really do feel the pressure.”

Garami can take credit for the fact that the coronavirus crisis barely affected Iran’s Jewish community. It certainly didn’t have the same effect in Iran as it did in other Jewish communities around the world, which suffered severely because of the pandemic. In early March, he already ordered that all synagogues in the country be closed, avoiding mass infection and preventing disaster from striking the community. “I immediately understood where this was heading, so I ordered that all the synagogues be closed and that people pray privately, without a quorum.

"At the same time, on [the Jewish holiday of] Purim, I authorized just this once to have the 'Megillah' [Scroll of Esther] read via livestream, and I forbade people from fasting on the Fast of Esther. I continued giving my classes through Instagram and Skype. I am convinced that we came out of it [the corona crisis] relatively unscathed because of all the precautions we took,” he added.

One of the most interesting issues is the relationship between this small community and the local Muslim population. “Our Muslim neighbors have a lot of respect for us as Jews living in Iran,” he said. “Unlike in Europe, for example, we do not have guards outside our synagogues and schools, and our personal safety is excellent. Of course, we sometimes encounter people who are anti-Semitic, but that happens everywhere. Most of the population respects us and lives in peace with us. What is important is that in Iran there is no such concept as organized attacks on Jews.”

Garami noted that while Jews in Iran do not have the custom of walking down the street in a yarmulke (skullcap), anyone who wants to wear identifiably Jewish clothing can. “You can walk around with a yarmulke, and there are in fact people who wear a yarmulke. It just attracts attention, because it is unusual, and it can become unpleasant. On the other hand, it would not pose any danger to the person wearing the yarmulke. The overall sense of safety among the Jews is excellent. We do not feel threatened in any way, either by the government or our neighbors," he said.

He explained that the country’s Jewish community has a history of good relations with its neighbors. “We have been living here for 2,700 years, ever since the Assyrian exile. From then until now, Jews lived in peace with their Muslim neighbors — except in a few isolated cases. It is important to remember that we are the biggest Jewish community in the Middle East after Israel. We have very strong ties to this place. Our ancestors lived here for years and many of our prophets are buried here. The Prophet Daniel is buried here, and we have the Tomb of Habakkuk, the Tomb of Mordechai and Esther, and other important sites."

One of the most volatile and sensitive issues for the Jews in Iran is the ongoing conflict between Israel and Iran. It places them in an uncomfortable position with the government. “We are always emphasizing that we do not like getting involved in all the disputes, wars and politics between the two countries. It is a debate between politicians and has nothing to do with religion,” Garami said very determinedly. “People tend to get confused, but there is a big difference between Zionism and Judaism. Judaism is a religion that is 3,300 years old, while Zionism is a national and political movement that is just 100 years old. As a country, the State of Israel has nothing to do with religion in general and Judaism in particular. This is not a war between religions. All the Jews here emphasize that. The worst thing that could happen would be to give the impression that this is a war of religion.”

Garami went on to claim that based on its actions, the Israeli government is very far from religion. “The Israeli government doesn’t care about Judaism at all. Everything that they supposedly give to the Orthodox is because of some political deal or other, and not because of their religious approach.” He even mentions a municipal order in Tel Aviv that banned the installation of stands to put on tefillin in the city. “In Tel Aviv, for instance, they do not allow stands to encourage people to put on tefillin, and they fine anyone who operates those stands. At the same time, they pride themselves on eating dog,” he added. Garami’s comments hint at remarks made by Mayor of Tel Aviv Ron Huldai in January 2018, who admitted that he ate dog meat when he visited Vietnam.

In January, Garami paid a highly publicized condolence call to the family of Iranian Quds Force commander Gen. Qasem Soleimani, who was assassinated by the United States. When Al-Monitor asked him to explain his visit, he said, “First of all, I wasn’t the only one going. Representatives of all the religions in Iran participated in the visit, including representatives of the Christian faith. They wanted to stress that this is not a war of religion, and that no one should think that this is a war between the different religions.”

Garami then asked to talk about general attitudes toward Soleimani. He noted, “What the Western world does not fully understand is that Soleimani is an Iranian national hero. He is really admired in our country. He showed great bravery in the Iran-Iraq War. Then, in the war in Syria, it was Soleimani who defeated the Islamic State, and this was very important to the people of Iran. Our visit, as representatives of all the religions, was to respect his memory after everything he did on behalf of Iran."

At the end of the interview, Al-Monitor asked Garami to express his aspirations for peace. He said, “We sincerely hope that there will finally be peace in the world, that all war will disappear and that we will witness the fulfillment of Isaiah’s prophecy [Isa. 11:6]: ‘The wolf will live with the lamb, and the leopard will lie down with the goat … nation shall not lift up sword against nation.’ It is what we pray for every day.”