Supporters of Blue and White leader Benny Gantz have not forgiven him for joining Prime Minister Benjamin Netanyahu’s government and their disappointment could mean the end of his political career. 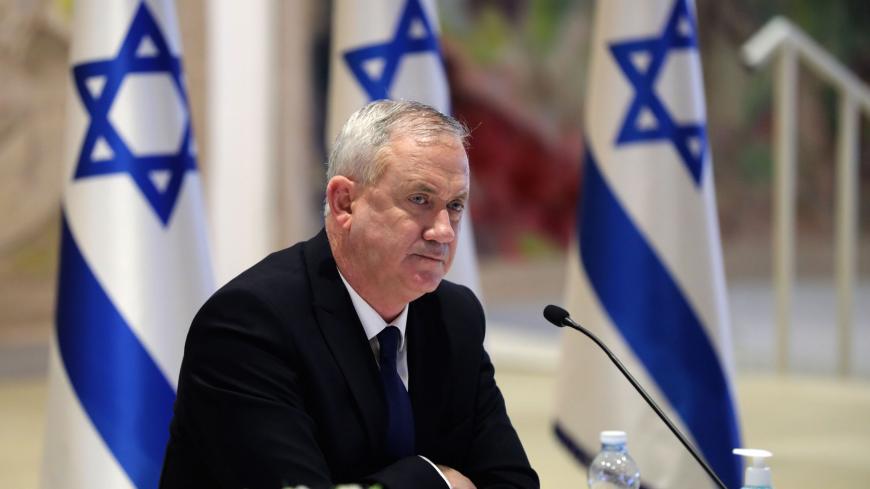 Israeli Alternate Prime Minister and Defense Minister Benny Gantz attends a cabinet meeting of the new government at Chagall State Hall in the Knesset in Jerusalem on May 24, 2020. - ABIR SULTAN/AFP via Getty Images

The prevailing wisdom among many Israelis, politicians and pundits has it that Defense Minister Benny Gantz, chair of the Blue and White Party, is politically finished. Barely seven weeks after he was accorded the title of alternate prime minister, Gantz’ center-left camp is shopping for an alternative to the alternate.

A poll conducted this week gives Gantz’ party nine Knesset seats — compared with the 33 or more that voters gave it in three consecutive elections in 2019 and 2020. True, Gantz ran in them at the head of a much bigger party that included the Yesh Atid and Telem factions before they split from him when he joined the government of Prime Minister Benjamin Netanyahu in late April. Nevertheless, nine seats are still only half the number his party currently controls in the legislature. People in his camp are asking not whether Gantz is finished, but how much longer he can last in his position. Another bet is on how long it will be before his party sinks into oblivion as did the centrist Kadima Party of Tzipi Livni and Shaul Mofaz or even the center-left Labor party, which took its final breath this past winter.

The strangest ingredient in this political stew is the fact that under his power-sharing deal with Netanyahu, Gantz is scheduled to take over as prime minister in November 2021. The former army chief is the first contender in decades who could potentially remove Netanyahu from office. He is the first and only politician to successfully position himself as an alternative to Netanyahu, and did so within 18 months of entering politics. There is even a target date anchored in Knesset legislation for him to assume the premiership, making it hard for Netanyahu to avoid the rotation, although not impossible. Gantz’ camp, however, is ignoring those gains.

Gantz’ bitter political fate highlights the difference between Israel’s right-wing voters and supporters of the political center and left, or more precisely between the pro-Netanyahu and anti-Netanyahu camps. While Netanyahu’s supporters will circle the wagons around their leader no matter what, his opponents will rush to stab their candidate in the back at the earliest opportunity. Refusing to accept political exigencies, they do not care that Gantz had no option but to join Netanyahu after running against him three times and they ignore that the route Gantz took will allow him to move Netanyahu aside within less than 18 months. They view his decision to go with Netanyahu as a stamp of approval for a politician under criminal indictment. Netanyahu’s supporters, on the other hand, are willing to continue marching to his tune even after his indictment on charges of bribery, fraud and breach of trust.

Gantz finds himself in a Catch-22. He has already been sworn in as Israel’s next premier, positioned alongside Netanyahu in the government leadership. If he wants to step into Netanyahu’s shoes, he cannot give him any excuse to renege on their rotation deal. However, the policies he has adopted to appease Netanyahu have been a polling disaster. He has to distinguish himself from Netanyahu, challenge his policies and record achievements. He has avoided doing so to ensure the November 2021 handover. When he drops down to five seats in the 120-member Knesset, Netanyahu will tell his Likud supporters and the Israeli public at large that it makes no sense to hand the premiership over to a man who enjoys such paltry public support. Gantz could end up not only humiliated by Netanyahu and losing his credibility and voters, but could also find himself dumped.

Nonetheless, it is too soon to deal him out of the game. Gantz still has a good hand against Netanyahu. He has already been sworn in, so Netanyahu would have to come up with a watertight reason for dismantling the government. The law that anchored the unprecedented power-sharing agreement stipulates that if Netanyahu dismantles the government, Gantz would assume automatically power until elections take place. Gantz’ insurance policy is only invalidated if the government falls apart over a failure to obtain Knesset approval for the state budget. It is the only loophole through which Netanyahu could drag Israelis to a fourth round of elections without immediately forfeiting his incumbency. This is where the coronavirus come in.

Israel is in the throes of what might be the worst economic crisis in its history. The hardship experienced by millions of Israelis is worse than initially estimated. Netanyahu knows that current polls giving his Likud 38 seats or more are in fact a lie. The real results could be very different. He also realizes he will have a hard time blaming Gantz for the crisis that could quickly upend his favorable poll figures. Nonetheless, let us not forget that Netanyahu enjoys particularly favorable political circumstances. By partnering with Gantz, he has eliminated the only viable alternative to his reign. His only current rival, the chair of the opposition Yesh Atid party Yair Lapid, while rising in the polls, needs time to truly take off. Former Defense Minister Avigdor Liberman is still licking the wounds of his failure to engineer Netanyahu’s downfall in three elections, and no one in the political system is ready to take on Netanyahu.

Gantz needs to reinvent himself. In a meeting with leaders of the ultra-Orthodox parties, he once again elicited their promise to prevent Netanyahu from violating the rotation agreement. At the same time, Gantz is trying to create an agenda, display independence and court his disappointed voters. Gantz does not stand much of a chance. Many in his camp are blindly groping for their next leader who will mobilize the anti-Netanyahu energy and create an alternative, a task even tougher than the one Gantz faces.