Iran's Rouhani warns other countries against following US arms sanctions

Iran has warned other countries of the United Nations Security Council to not go along with US plans to continue the arms embargo. 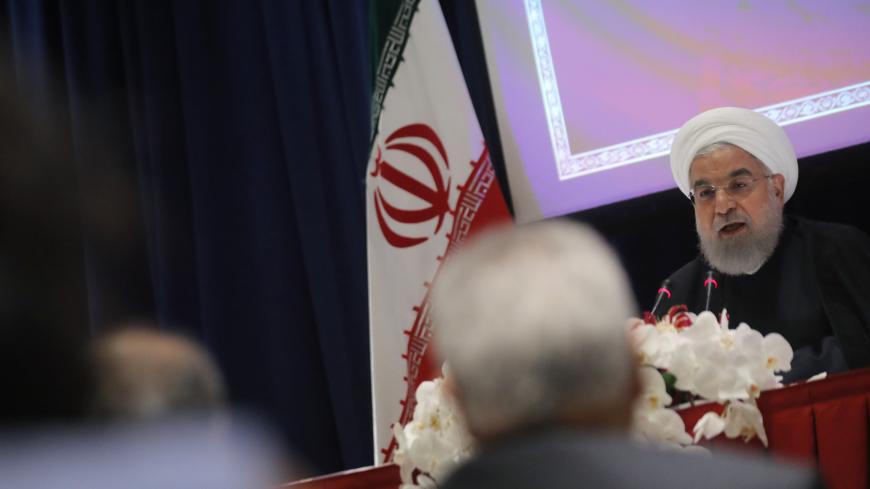 Iranian President Hassan Rouhani speaks at a news conference on the sidelines of the UN General Assembly in New York, Sept. 26, 2019. - REUTERS/Brendan Mcdermid

President Hassan Rouhani has issued a warning to other members of the United Nations Security Council (UNSC) on following the US plan to continue the arms embargo on his country.

Speaking at a Cabinet meeting on June 14, Rouhani said, “The issue of the end of arms sanctions in October is one of the important achievements of the Joint Comprehensive Plan of Action (JCPOA), and if the Americans want to undermine this achievement, other big nations know what Iran’s response will be.” He continued, “I am hopeful all of the countries of the Security Council and the board of governors are completely aware of all of America’s conspiracies.”

As part of the JCPOA, the formal name for the nuclear deal between Iran and the five permanent members of the UNSC plus Germany, a ban on selling arms to Iran and Iran’s ability to sell arms to other countries will be lifted in October. The United States, which exited the deal in May 2018, is seeking to reenter the deal and initiate a snapback on Iran that would keep these sanctions in place. Russia and China, both permanent members of the Security Council, have said they would oppose such US measures.

Rouhani did not specify what Iran would do if other countries go along with the United States on continuing the arms embargo. An article in Mehr News listed a few options Iran would have. The article suggested that Iran could limit International Atomic Energy Agency (IAEA) inspections, increase uranium enrichments back to pre-JCPOA levels at 20%, stop the additional protocols the country is voluntarily implementing, leave the Non-Proliferation Treaty that the country entered in 1968 or completely leave the JCPOA.

Despite the stated opposition from Russia and China to the continuation of the embargo, the fact that Iran is taking seriously the ability of the United States to force its way on this suggests the country is worried it may go through.

While Iran is currently trying to fight off a UNSC decision on the arms embargo, it is also questioning the latest IAEA decisions to move ahead on an inquiry that was sparked by Israel. Abbas Mousavi, spokesman for Iran’s Foreign Ministry, criticized the agency for an upcoming meeting to discuss claims about a secret Iranian nuclear site that was presented by the Israeli government. “It is unfortunate that the agency, instead of relying on reliable documents and Iran’s high cooperation with the agency, relies on the claims of a regime whose animosity with the people and government of Iran is clear to everyone,” Mousavi stated.

He continued, “Our recommendation to the agency is to have some foresight and base your questions on issues that are more detailed and legal and not the claims of a regime that claims it received the documents from a spy.”

The United States reapplied nuclear sanctions on Iran after its JCPOA exit, and Iran reopened parts of its nuclear program that it had closed under the JCPOA. While Iran has technically remained in the JCPOA, it is hopeful that European countries in the UNSC will help it evade US sanctions for its full return to the JCPOA.