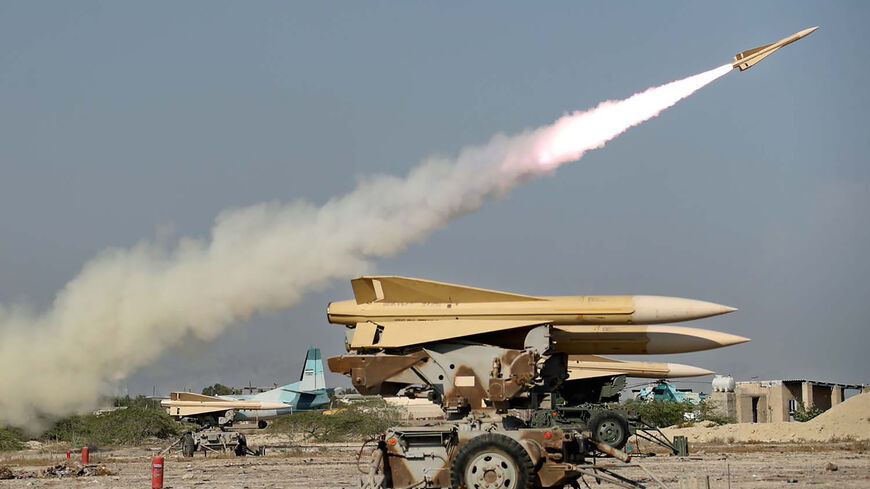 A handout picture provided by the Iranian Army official website on Sept. 10, 2020, shows an Iranian Shalamcheh missile being fired during a military exercise in the Gulf, near the strategic strait of Hormuz in southern Iran. - Iranian Army office/AFP via Getty Images

Iranian officials and analysts say that with the expiration of the arms embargo, they are now ready to sell weapons to other countries.

Iranian Defense Minister Amir Hatami gave an interview to Iranian television outlining the country’s plan now that the UN arms embargo — which was part of the nuclear deal known as the Joint Comprehensive Plan of Action (JCPOA) — has expired. Hatami said numerous officials from various countries have visited Iran and are “surprised” by the progress the country has made in regards to their weapons industry despite sanctions.

Hatami said they have tanks, cannons and mortars available for sale. He also talked about the advances the country has made with drones and missiles. “We will sell to countries that do not misuse these weapons against others and only seek legitimate defense,” he said. “We are not like America, which threw Saudi Arabia and the United Arab Emirates at the people of Yemen just to sell weapons.”

The expiration of the ban has led to much speculation as to what actual effects it would have on Iran being able to purchase and sell arms. An article in Tasnim News Agency said that with the expiration, Iran will “continue its strategic direction” toward Eastern countries, particularly Russia and China. Despite the various “illogical and unreasonable” speculation about who Iran would sell to, the country would continue to explore options in making “technological and scientific” advancements, meaning that rather than outright purchasing arms they would be interested in acquiring more knowledge, the article stated.

The article said it is clear that despite advancements in certain military fields due to sanctions and the need to be self-sufficient, Iran is lacking when it comes to fighter jets, adding it has been half a century since they have been able to upgrade. However, the article wrote that the current budgetary constraints and economic situation would take priority over such purchases.

Regardless of the expiration of the ban, another factor the article did not refer to is that any company doing business with Iran is subject to US sanctions, and this in itself limits what the country can sell or purchase.