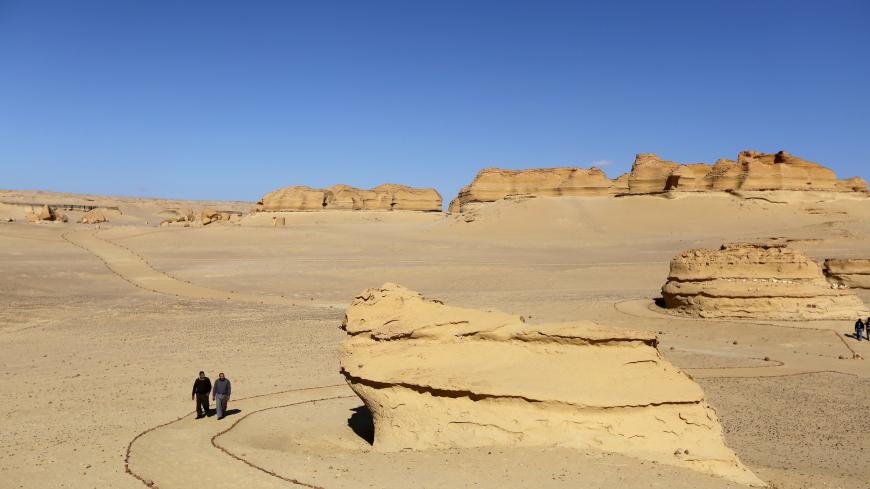 People walk around the rocks in the natural reserve area of Wadi al-Hitan, or the Valley of the Whales, in the Western Desert in Egypt's Al Fayoum governorate southwest of Cairo, Jan. 14, 2016. A gold deposit has recently been found in Egypt's Eastern Desert. - REUTERS/Mohamed Abd El Ghany

An Egyptian company has discovered a large gold deposit in the country’s Eastern Desert, the Ministry of Petroleum and Natural Resources announced today.

The ministry said the gold discovered in the Iqat region is estimated to be more than 62,500 pounds (28,000 kilograms, or a million ounces). The mining company Shalateen made the discovery. Shalateen and the government will form a joint venture to extract the gold, the Ministry of Petroleum and Natural Resources said in a press release. That would be about $1.8 billion at today's prices; mining.com said the government expected the cost of developing the site to be $1 billion over 10 years.

Observers have believed Egypt’s deserts possess large quantities of gold for years, and the government is now prioritizing gold exploration. In August, Egypt ratified mineral resources amendments aimed at encouraging gold mining in the country. The new measures reduced government fees collected from gold miners in a bid to encourage investment. A government forecast last year predicted that gold mining could create more than 100,000 new jobs in the populous country.

The state hopes to gain $375 million in gold mining investments over the next two years, the ministry said.