Amendments are being finalized to crack down on female genital mutilation which remains popular in rural Egypt. 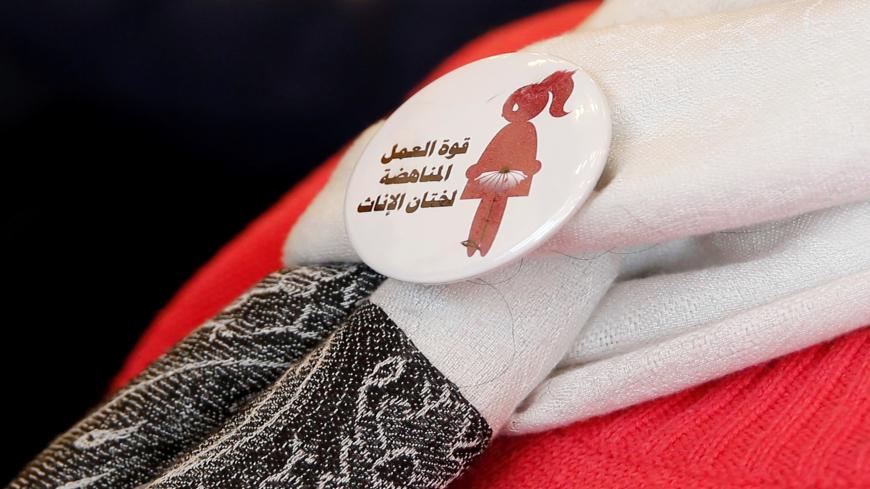 A badge that reads "The power of labor aginst FGM" is seen on a volunteer during a conference on International Day of Zero Tolerance for Female Genital Mutilation in Cairo, Egypt, Feb. 6, 2018. - REUTERS/Amr Abdallah Dalsh

CAIRO — Amendments to a number of articles in the Egyptian law incriminating female genital mutilation (FGM) have recently been finalized, toughening penalties against the perpetrator of this atrocious act.

On June 14, on the National Day for Elimination of FGM, head of Egypt’s National Council for Women Maya Morsy told reporters during an online press conference that the proposed amendments include widening the criminalization scope and redefining the act of FGM as a form of deformity.

Morsy said that they also included a solution for incriminating medical professionals undertaking the procedure, giving no further details.

The suggested adjustments came less than two weeks after a father had tricked his three young daughters in undergoing the procedure in southern Egypt.

A statement released June 3 by the public prosecution’s office said that the man brought a doctor to the house and told his daughters that he came to vaccinate them against the coronavirus. Instead, he circumcised the girls, in a case that sent shockwaves across Egypt.

The prosecution investigated the matter and it turned out that the three sisters were injected with a drug that knocked them out before they had the invasive operation done to them. “They woke up with their legs tied while suffering from severe pain in their genitals,” the statement read.

The girls informed their mother, who is divorced from their father, who reported the incident to child protection.

A forensic report revealed later "the excision of [their] … reproductive organs."

Both the doctor and the father were referred to an urgent trial before a criminal court within 48 hours of the investigations. No specific date has been set for the trial yet.

At the end of January, a 12-year old girl named Nada lost her life while undergoing circumcision at a private clinic in the south of Egypt. Her death preceded the International Day of Zero Tolerance for FGM on Feb. 6.

Nada’s parents and the doctor who performed the procedure were referred to a criminal court pending trial. They have not stood trial yet.

Such incidents led advocates of children’s rights to question the efforts and campaigns launched over the past years against the practice.

“As a lawyer I believe the main problem doesn’t have to do with legislation, as it may seem to some. Rather, the organizations — which hold meetings and conferences to discuss the subject and suggest recommendations — need to simplify the issue and address people in their own language,” children’s rights advocate Mahmoud el-Badawy told Al-Monitor.

“The dilemma here has to do with turning all those laws and recommendations into reality positively reflected on the target groups. FGM is carried out everywhere and every day in Egypt, while only a small number of cases are reported,” he said.

A 2016 survey by UNICEF indicated that 87% of women and girls ages 15-49 in Egypt have undergone the procedure.

FGM, also known as genital cutting or female circumcision, is a tradition dating back to Pharaonic times. It mostly exists in Africa and some Middle Eastern countries.

Even though the practice has been illegal in Egypt since 2008, it remains rife in this populous Arab country where some doctors, nurses and midwives undertake it in secret, especially in rural areas and in the south.

The Egyptian churches and the highest Islamic institutions in the country have recurrently rejected the procedure, saying it is prohibited by Islam and Christianity for causing irreversible harm to women.

However, many parents still believe that female genital cutting preserves a girl’s chastity by curbing her libido and put their daughters through the ordeal.

“For a large segment of society, female circumcision is a deeply rooted tradition, mistakenly linked to religion. It is related to people’s collective unconscious,” psychologist Hanan Marzouk told Al-Monitor.

“Throughout my experience as a researcher in this domain, I came across men who even refuse to marry uncircumcised women, believing their wives have no right to enjoy intimacy, or because they have a sense of insecurity that they will be unable to satisfy women’s physical needs,” Marzouk said. “I’m talking about communities where there is limited or no sex education available and the whole issue is considered a taboo.”

Other than the physical harm, the practice has a negative impact on women’s psychological well-being.

“Women who underwent female circumcision are denied a normal sex life. They are ashamed of their bodies, and many of them find sex repulsive,” Adel Midany, professor of psychiatry at Al-Azhar University, told Al-Monitor.

“Following the act they usually experience anxiety and reactive depression, mistrusting their parents who subjected them to this violation at the time when they were supposed to protect them against the world’s evils. Over time they may also develop post-traumatic stress disorder,” he said.

“Depending on the grade of circumcision, women who went through this experience suffer from orgasmic dysfunction, if not frigidity,” Midany said, adding that very few couples seek professional help and are trained on specific techniques to help them enjoy intimacy.

A 28-year old woman told Al-Monitor about her traumatic experience with FGM that started at the age of nine.

“My mother brought a midwife to the house. I felt there was something not right. I can still feel the pain and fear I was undergoing as the old woman ruthlessly cut part of my body with a razor, while I was tied by my mother and her neighbors,” she said on condition of anonymity, adding that she rejects the idea of marriage for fear of failure.

“The only person who was supposed to be the source of safety and comfort acted otherwise, which made me lose faith in her as a protector ever since,” she said.