Although the practice of female genital mutilation in Egypt has decreased, the phenomenon is still omnipresent in villages, prompting civil society and the government to initiate a campaign to raise awareness. 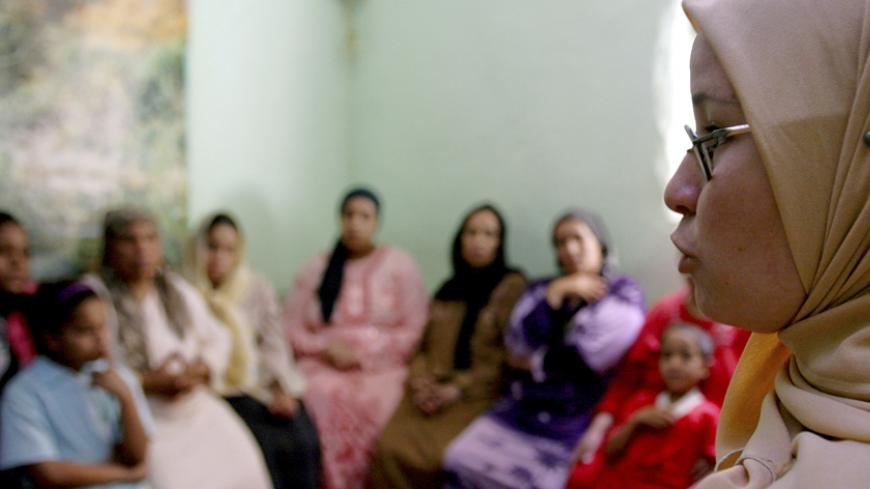 A counselor talks to a group of women to try to convince them that they should not have female genital mutilation performed on their daughters, in Minia, June 13, 2006. - REUTERS/Tara Todras-Whitehill

CAIRO — I vividly remember, when I was little, those collective ceremonies that our neighbors from rural areas — from Upper Egypt in particular — used to have for their daughters. They used to hand out sweet rice dishes and the girls used to wear brand new white clothes, as if they were brides. However, I never understood why they would lean against their mothers to be able to walk and why they couldn’t play with the rest of us during ceremonies that were held specifically for them.

This scene, depicting female genital mutilation (FGM) ceremonies, is no longer common in Cairo or in other big Egyptian cities. This is probably due to several reasons, including the fact that many rural families have gotten used to urban civil life and abandoned such traditions known in the countryside. In addition, the Egyptian community’s negative look at FGM also had a role in it, as well as the fact that civil society organizations came together with the Egyptian government to fight this tradition and criminalize it in 2008 under the Egyptian Child Law.

Unfortunately, the absence of FGM ceremonies in Egyptian cities has not been accompanied by the absence of the phenomenon itself. Egypt has the highest rate of FGM in the world, according to the latest UNICEF reports, as 91% of girls in Egypt undergo FGM. However, the law has now compelled families to perform these ceremonies — designed to preserve their daughters' chastity — in secret.

The death of Rasha, 13, one of the victims of "secret FGM" in Egypt in 2013, sparked a new revolution against the phenomenon, as the Egyptian judiciary took action to punish the perpetrators. An Egyptian court issued its first ruling against FGM on Jan. 26, 2015, sentencing the doctor and the father to prison.

The National Population Council in Egypt declared Feb. 6 the "International Day for the Elimination of FGM." It also launched in 2015 the “Enough with FGM” campaign, in which television ads depicted the suffering of women from the effects of this practice and how science and religion view this tradition.

The representatives of civil society in Egypt held the religious movements — such as the Muslim Brotherhood and the Salafists — responsible for the re-emergence of this phenomenon in Egypt’s rural areas.

Hany Helal, chairman of the Egyptian Center for Children’s Rights, noted that the Freedom and Justice Party took advantage of medical convoys — which it led in Upper Egypt — to promote the return of FGM after Mohammed Morsi became president in 2012. The doctors present during the medical convoy were accused of raising banners promoting free FGM procedures for girls. “The Doctors' Syndicate should follow up on this issue in order to prevent the spread of this practice under the medical banner,” he told Al-Monitor.

Meanwhile, head of the Egyptian Center for Women's Rights, Nuhad Abu Qomsan, told Al-Monitor, “The sheikhs of the extremist Islamic groups — especially the Salafists — are still trying to ruin any progress we accomplish in the awareness-raising campaigns on the dangers of FGM.”

Helal and Abu Qomsan both agreed that the Egyptian government’s tightening its grip on civil society negatively affects programs that aim to defend children’s rights and fight this phenomenon.

She pointed out that the last group, which used to represent 30% of the population that practices this tradition, refrained from performing FGM following the issuance of the law in 2008. Therefore, collective FGM ceremonies disappeared before reappearing after the January 25 Revolution due to lack of security.

“The ones who believe that it’s about the girl’s chastity still need more awareness to understand that chastity and honor are not about cutting a piece of the girl’s body. As for the religious extremists, they are really hard to convince,” said Abu Qomsan.

Helal called for harsher punishment that would include both parents. He pointed out that despite the fact that Al-Azhar has assumed the responsibility of raising religious awareness on the dangers of FGM, the issue is still a bone of contention among sheikhs. He stressed that the church settled its position a long time ago, as there is no dispute between priests on whether FGM is a religious ritual. The number of Christian families that still practice this tradition is very limited.

He emphasized the government's responsibility in activating the child protection committees formed in 2008 to follow up on the law's application in various villages.

“Enough with FGM” is a resonant phrase that has recently entered every Egyptian household through TV in an effort to stop this phenomenon in all Egyptian communities.