A spokesperson for the Saudi-led coalition in Yemen has accused the Iran-aligned rebels of launching ballistic missiles in violation of a unilateral cease-fire. 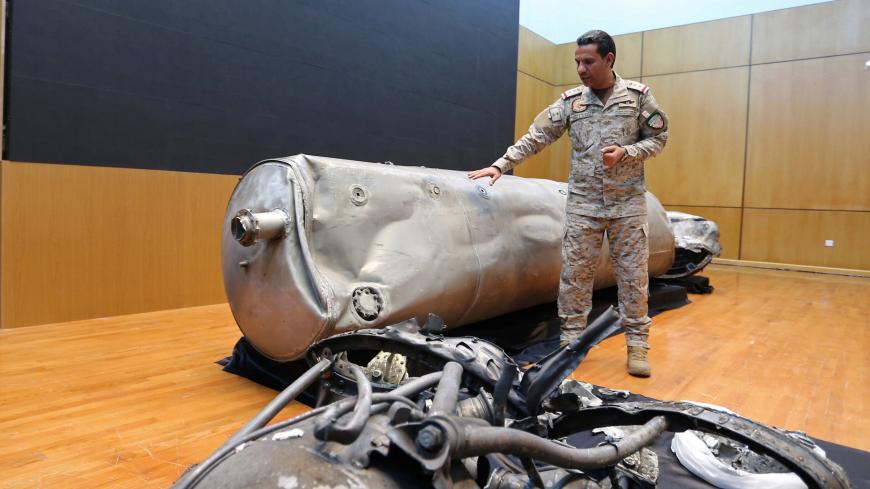 Saudi-led coalition spokesman Col. Turki al-Malki displays the debris of a ballistic missile he says was launched by Yemen's Houthi group toward the capital during a news conference in Riyadh, Saudi Arabia, March 29, 2020. - REUTERS/Ahmed Yosri

Coalition spokesman Col. Turki al-Maliki said the provinces of Amran and Saada in northern Yemen were hit with air attacks in the latest violation by the Iran-aligned Houthi group of the unilateral cease-fire. In early April, the Saudi-led coalition announced the fighting pause, which the Houthis rejected, to allow for UN-brokered negotiations between the two parties amid the coronavirus outbreak.

Maliki said Houthi forces have violated the cease-fire 2,400 times, using light and heavy weapons in addition to ballistic missiles. Last month, the rebels launched a number of missiles in the direction of the Saudi capital Riyadh as well as Jazan, Asir and Najran near the Yemeni border.

Yemen has been ravaged by war since 2014, when the Houthis, backed by Iran, took control of the capital Sanaa and captured large swaths of the country from pro-government forces, on whose behalf the Saudis and a group of 20 Arab allies militarily intervened in March 2015.

In what the United Nations has called the world’s worst humanitarian crisis, the conflict has killed as many as 100,000 people. Nearly 80% of the population in need of some form of humanitarian assistance.

On Tuesday, Houthi authorities confirmed Yemen’s first death from COVID-19 in rebel-held territory. The country, which reported its first case on April 10, has so far registered 21 infections and three deaths in areas held by the Saudi-backed government.

Aid agencies have warned the Arab region’s poorest country is ill-equipped to handle a major coronavirus outbreak. After five years of war, only half of Yemen’s hospitals are fully functional and health care workers already have to contend with a cholera epidemic and other infectious diseases.