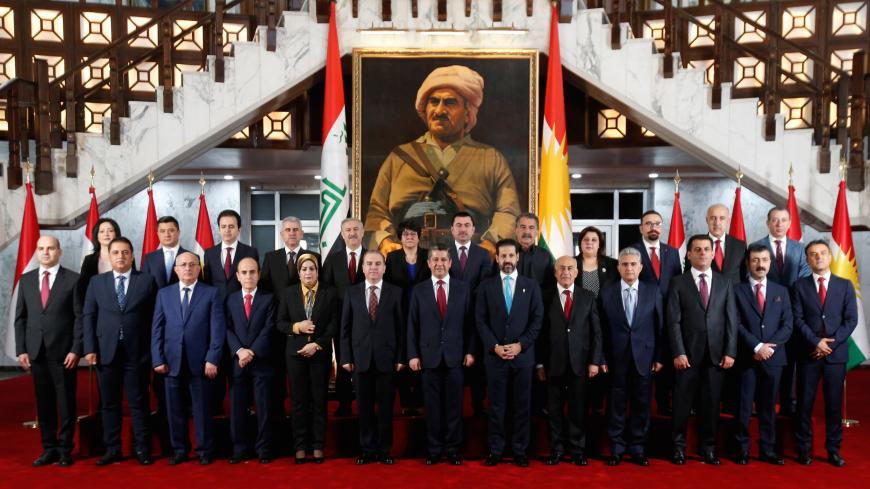 DIYARBAKIR, Turkey — Is the Kurds’ unity in danger in Iraqi Kurdistan, the autonomous region they managed to build after decades of grueling struggle? Fears of an internal rift have grown over a demand for enhanced self-governance powers by the province of Sulaimaniyah, hot on the heels of tensions between Kurdistan’s two main political parties over the control of a strategic area in the region.

There are fears that the move could have wider implications for the regional government's dealings with the central government in Baghdad, with some Kurdish politicians warning it could threaten the region's semi-autonomous status.

The Sulaimaniyah Provincial Council, dominated by the Patriotic Union of Kurdistan (PUK) and the Gorran movement, set up a committee April 30 to work on a council decision to seek financial and administrative decentralization for the province. In other words, the Kurdish government in Erbil, led by the Kurdistan Democratic Party (KDP), is under pressure to transfer some of its powers to the local authorities in Sulaimaniyah.

The move came atop a dispute over who controls Zini Werte, a key mountainous route also claimed by the outlawed Kurdistan Workers Party (PKK), Kurdish-Turkish militants based in the nearby Qandil mountains and pursued by Turkey. The standoff has fueled concerns of a fresh conflict between the KDP and the PUK, whose historical rivalry has led to bloody clashes in the past.

According to Lokman Wehbi, a PUK deputy in the Kurdish parliament, such fears are baseless. “In no way do we seek to split the Kurdistan Regional Government,” Wehbi told Al-Monitor.

Sulaimaniyah’s decentralization demand, he argued, aims to empower provinces and municipalities in a bid to improve governance across the region and address popular grievances over services. “The government would sustain its policies over the region in general,” he said. “We don’t seek the breaking down of Kurdistan. We want Kurdistan’s central government and parliament to stay on. Yet we want a broader distribution of power.”

Wehbi played down concerns that the demand could lead to a rift between the KDP and the PUK, which are partners in the Erbil government. “I see no reason for a rift because this is part of the Kurdistan government’s program, too. They have made a promise to that effect,” the deputy said.

He added, “We favor [decentralization] not only for Sulaimaniyah, but for Dahuk, Soran, Halabja and Erbil as well. In no way do we seek the breakup of the Kurdistan Region. We want it to be stronger and more unified. What we want is to take over the services burden of the government.”

Sulaimaniyah’s decentralization drive requires a decision by the Erbil government to materialize. And the government, led by the KDP’s Masrour Barzani as prime minister, has not closed the door on the demand. Government officials agree that power sharing is part of the government program, but warn that any attempt at dual governance would be blocked and the status of the Kurdistan region would be preserved.

KDP deputy Mushin Doski conceded that Sulaimaniyah’s move has triggered concerns in Erbil over the unity of Kurdistan, especially in its dealings with the federal government in Baghdad. “If this would lead to the fragmentation of Kurdistan, we will not allow it. But if they seek the delegation of some powers from the central government to cities, that’s a very natural demand and we could work together on it,” Doski told Al-Monitor.

Doski recalled that Kurdistan’s premier himself had upheld decentralization. “There is no need to consult the [Erbil] government on all decisions. Let local administrations make the decisions,” Doski said. “But I cannot conceal it — we are worried. If the Sulaimaniyah administration moves to deal directly with Baghdad, that would be very harmful and we would not allow it.”

Baghdad and Erbil have been embroiled in long-running disputes over Kurdistan’s share from the federal budget and oil revenues, stemming largely from Kurdish moves to export oil independently from Baghdad. In April, Baghdad cut budget contributions to the Erbil government, including the salary payments of civil servants, citing the global oil slump and Erbil’s failure to transfer 250,000 barrels of oil per day to federal coffers under existing budget arrangements.

Sulaimaniyah is unwilling to bear the brunt of the costs of Baghdad-Erbil bickering. Proponents of enhanced self-governance argue that Sulaimaniyah can stand on its own feet by using its oil and gas resources and customs revenues from border crossings with Iran.

Mehmet Alkis, a political scientist who closely follows Iraqi Kurdistan, told Al-Monitor the controversy also has to do with in-house rivalries in the PUK since the demise of its founder, Jalal Talabani, in 2017.

“The clique led by Lahur Jangi, in particular, is trying to gain strength politically and economically. It sees the [decentralization] demand as a way to strengthen its position within the party,” said Alkis, who teaches at Dicle University in Diyarbakir, Turkey’s largest Kurdish-majority city.

The Erbil government could undertake some reforms to calm the situation, Alkis said, adding he did not expect “an extreme escalation of tensions.”

The potential role of Iran is another factor that comes to mind, given its close ties with the PUK. The Iranian influence in Sulaimaniyah’s decentralization move is only “indirect,” according to Alkis. “How far could Iran’s influence go? Could it penetrate the regional government as well? That’s an open question,” he said.

And what about Turkey’s Kurds across the border? Could they take inspiration from Sulaimaniyah’s move? Alkis believes such an impact is unlikely. “I don’t think that administrative autonomy for Sulaimaniyah and enhanced powers for its provincial council would lead to any external repercussions,” he said.

Ankara has long resisted Kurdish demands for stronger local administrations, wary that it could play into the hands of the PKK. In 2015, an attempt by PKK-linked groups to declare self-rule and seize control in some urban areas led to a ferocious crackdown by the security forces. Since then, Ankara has clamped down even on democratically elected Kurdish mayors.