Impoverished seasonal agricultural workers in Turkey are riding out the pandemic in squalid tent encampments to earn their living, providing a labor force crucial to the agricultural sector. 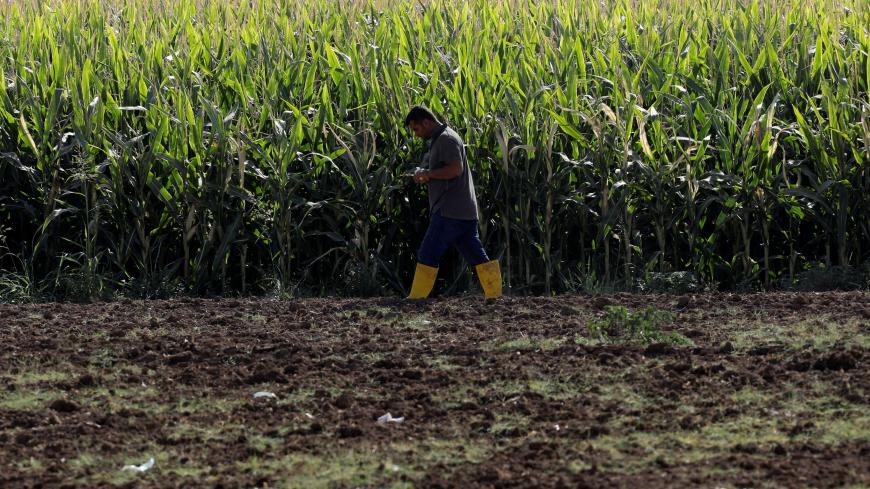 A farmer walks past a corn field near the Turkish-Iraqi border in Silopi, Turkey, Sept. 23, 2017. - REUTERS/Umit Bektas

POLATLI, Turkey — The economic fallout of the COVID-19 pandemic has sparked food security fears across the world. In Turkey, it has underscored the crucial role that seasonal workers — impoverished people crisscrossing regions for manual jobs — play in the country’s food supply chain. Sustaining agricultural activity is critical for Turkey, where the pandemic has worsened existing economic woes, including an agricultural decline that has fueled food price hikes in recent years. But with the agricultural season now in full swing, seasonal workers are left with a tough choice: brave the coronavirus risk in neglected encampments to earn their bread or avoid risky working conditions and lose their scarce incomes.

On a roadside near Polatli, a town not far from Ankara, several hundred seasonal workers from Sanliurfa, a province some 900 kilometers (560 miles) away, have already erected a tent city where few precautions were visible against an outbreak when Al-Monitor visited last week. A few spacious tents aside, families of up to 10 people stay in small sheds made of tarps and sticks, many of which abut on another for steadiness. The only running water in the encampment comes from a sole irrigation hose.

Life exposed to contagion risks is certainly not a matter of choice. Asked whether they were aware of the risks, a worker confirmed he did fear contracting the novel coronavirus. Then why not wear a mask, at least? “Where can I possibly get a mask from?” he replied.

According to the workers, neither the field owners nor the authorities have tried to provide them with face masks. And no one from the local agriculture or health department has visited the encampment since the workers’ arrival in mid-May, they said. In another nearby tent city, the head of the group said, “We called the authorities. They said they were understaffed because of the coronavirus and would come only after the holiday.” He was referring to the three-day Eid al-Fitr holiday, which ends May 26.

Water in plastic washbowls, soap and dishwashing liquid is all the workers and their children have for cleaning and sanitation. Makeshift latrines and bathing spaces, covered with blankets for privacy, stand in close proximity to the tents. Women cook food in large pots over cooking pits in the ground, using dry branches to build fires.

Asked about the risk of contagion, one worker who brought his children along said, “We keep dying anyway. What difference does it make if I die in an accident or in a pandemic?” He was referring to the high rate of work accidents among seasonal agricultural workers in Turkey, a rate second only to that in the construction sector.

The workers expect to toil longer hours this summer because travel restrictions over the pandemic delayed their arrival, leaving a backlog of work in the fields. “Previously, we would work eight hours a day, but now we will be working 12 hours to get the job done,” the leader of the workers said.

The labor shortages have already hit the crops in some regions. Cherry orchards went unharvested in the western Aegean region last month, while onions rotted in fields in the south.

The government has since eased travel restrictions for seasonal workers. Yet the conditions it imposed on social distancing and hygiene rules are hard for them to meet.

Ertan Karabiyik, secretary-general of the Development Workshop, a non-profit group that recently penned a report on the issue titled “Virus or Poverty?,” said, “The workers are required to increase distancing in the tents, but how are they supposed to get additional tents? They are required to wear face masks, but how are they supposed to get and pay for those masks? What the workers earn is already below the minimum wage — they cannot meet those requirements.”

Additionally, the workers now pay more to reach their workplaces as transportation services are required to operate on reduced capacities and charge higher fees from the passengers accordingly. To reach Polatli, the workers from Sanliurfa had to pay 400 Turkish liras ($59) per person, the payment for a week of labor in the fields.

The number of seasonal agricultural workers, estimated at some 800,000 in normal times, is expected to decrease across the country this year, according to Karabiyik. In Sanliurfa, for instance, a sixth of the usual 6,000 seasonal workers have stayed at home.

And what happens if the coronavirus hits the encampments? “That would be the moment of truth,” said Besim Can Zirh, a sociologist at Ankara’s Middle East Technical University who contributed to the Development Workshop’s report. According to the scholar, an outbreak would probably lead to quarantining the affected encampment, leaving its inhabitants out of work and throwing both their wages and the crops into jeopardy.

Without enough workers to cultivate or harvest the crops, disruptions in output might result in supply shortages and push prices up. According to Zirh, cherry and plum prices went up and tomato prices fluctuated in early spring when seasonal workers were still subject to tight travel restrictions. An onion producer in the southern province of Hatay, interviewed for the report, said he had to leave his crops in the field because he failed to find workers to employ, Zirh said.

Without additional support for seasonal workers, productivity in agriculture might decrease. Neither Zirh nor Karabiyik expect a major food crisis in Turkey, but further increases or fluctuations in agricultural product prices could be imminent. In April alone, food prices rose 2.53%, well above the 0.85% overall consumer inflation, compounding a similar uptick in March.