Turkey’s COVID-19 balance sheet: Turkish President Recep Tayyip Erdogan has had relative success in combat against the outbreak, but a financial collapse could be on the horizon. 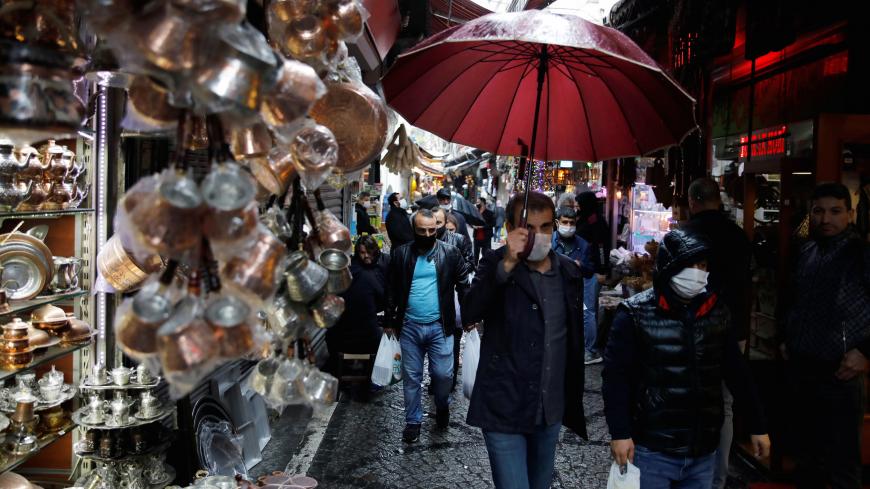 People wearing face masks shop at Eminonu district, amid the spread of the coronavirus disease (COVID-19), in Istanbul, Turkey, May 4, 2020. - REUTERS/Umit Bektas

Although at one point it was feared that Turkey might follow Italy’s trajectory in terms of fatalities from the novel coronavirus pandemic, the country has instead been doing reasonably well, with 3,641 deaths as of May 7 compared with Italy's 29,958. With particular self-confidence, President Recep Tayyip Erdogan announced that drastic measures imposed on 80% of the population would be gradually eased. The restrictions on movements of people age 65 and older and 20 and younger will be loosened. Turkish Airlines is expected to resume its domestic flights in June.

The infection seems to have reached its peak and begun to decline.

Statistics showing the ratio between total recovered cases and infections as well as the number of fatalities attest to such a trend.

Italy had the highest death toll in Europe until May 5, when it was surpassed by the United Kingdom.

Turkey has a much lower death toll per million citizens than Britain, France, Spain, Belgium, the Netherlands, Sweden and Switzerland, and arguably can be categorized with the seemingly successful Nordic countries of Norway and Finland.

However, Turkey’s official figures, which are updated every day by the Health Ministry, continue to be contested.

The Financial Times analyzed “Turkey’s real death toll” by using specific techniques and wrote May 5 that Turkey’s death toll could be as much as 25% higher than the official figures. Still, it said the analysis backs Erdogan’s claim that Turkey has a much lower death toll per million than many European countries and the United States. The paper said the analysis corroborates official assertions that Turkey has reached a turning point in the outbreak and has a declining number of new daily deaths.

Turkey’s relative success story in its fight against the coronavirus is outlined in a post written by two scholars, Evren Balta and Soli Ozel, for the French think tank Institut Montaigne. They said that in a sudden crisis such as this pandemic, it isn’t the number of regular hospital beds that matter but rather intensive care unit (ICU) beds, and that Turkey was one of the top countries in Europe in ICU beds per capita. The post said three-fifths of the Turkish ICU beds were in private hospitals.

Turkey’s relatively young population — the median age of its 84 million people is 31 — appears to have played a crucial role in the low fatality rate.

Erdogan’s government missed no opportunity from the very beginning of the coronavirus crisis to turn into an effective public relations campaign for its political ends. While distribution issues involving protective masks inside the country are not resolved, Ankara has boasted of sending medical equipment to 57 countries, including the United States.

Instrumentalizing the coronavirus crisis for Turkey's foreign policy objectives has more to do with a looming financial crisis for the country, one exacerbated by the COVID-19 pandemic. The government waged a ferocious battle to keep the Turkish lira under the psychological threshold of 7 to the dollar. But on May 1, despite burning precious reserves by the Turkish Central Bank, the threshold was passed; it traded at 7.2 to the dollar on May 7.

“Turkey’s battle to defend its currency against the US dollar has suffered a setback after intense selling pressure pushed the lira to a level last seen in the country’s 2018 currency crisis.” the Financial Times wrote.

Turkey has little leeway other than for a swap deal with the United States for funding as it is adamant that it will not knock on the doors of the International Monetary Fund as part of an effort to stave off an economic collapse. The survival of the Erdogan regime increasingly seems to hinge on the country’s economic prospects.

This may be explained by a recent Carnegie Middle East Center article written by the European Union's former ambassador to Turkey, Marc Pierini. He said Turkey's “carefully choreographed delivery of a consignment of six pallets of medical supplies to Washington, D.C. on April 28 was accompanied by a letter from President Recep Tayyip Erdogan telling President Donald Trump that he was ‘a reliable and strong partner’ of the United States. The not so subliminal message was that Turkey expects to avoid anticipated US sanctions for its S-400 missile deal with Russia and wants to benefit from a ‘swap scheme’ implemented by the US Federal Reserve for countries most affected by COVID-19.”

Yet COVID-19 diplomacy cannot adequately cover Erdogan’s predicament. He is inclined to resort to further measures to silence his critics and put Turkey on a more repressive trajectory in terms of domestic politics and a more aggressive and nationalistic foreign policy. That looks to be one of the political consequences of the coronavirus in Turkey’s near future.