Nearly 83,000 people in Turkey have recovered from the novel coronavirus but as the government touts its success on the public health front, another fire has ignited: a record low in the lira as foreign investors flee. 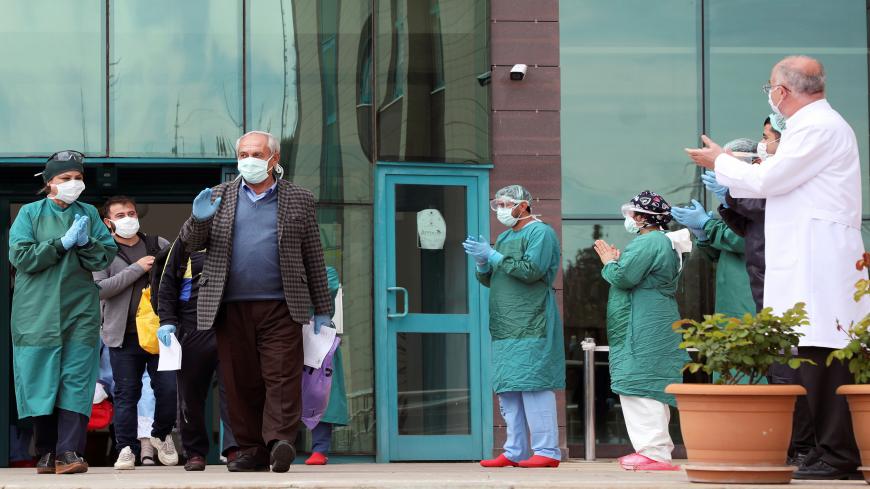 Medical staff applaud patients who are leaving from the Dicle University Hospital after recovering from the coronavirus, Diyarbakir, Turkey, April 15, 2020. - REUTERS/Sertac Kayar

Coronavirus
Economy and trade
May 7, 2020

ISTANBUL — Turkey’s health minister said on Thursday the country has proven it “gets results” in its fight against the novel coronavirus after nearly 83,000 people recovered and the number of new deaths sunk to their lowest level since March. Now the government is contending with a crunch on the economic front as the lira sinks to record lows.

“We must push back this virus in a determined manner and defeat it with our measures. We have proven that it is not difficult to get results,” tweeted Health Minister Fahrettin Koca. The day before, he told a news conference, “The first phase in the fight against coronavirus is over. … We own a success that the rest of the world is working to emulate.”

Koca has credited innovative drug therapies including the controversial hydroxychloroquine as well as a lower rate of intubation and expansive contact tracing for Europe’s lowest death rate from the virus at 2.7%. However, testing has slowed in recent days, down to 30,395 on Thursday compared with a peak of 43,498 on April 29.

Other factors that have helped Turkey include Europe’s youngest population and social norms against depositing the elderly in nursing homes, which have been devastated by the virus in the West, wrote political scientist Evren Balta and international relations professor Soli Ozel in an article for Institut Montaigne this week.

Well-educated Turkish doctors inured to working under stressful conditions have not been overwhelmed by the sudden rise in patients, they wrote. A robust health system expanded during the Justice and Development Party's 17 years in power includes one of the highest numbers of intensive care units in Europe, they said. These ICUs proliferated at private hospitals, which were allowed to charge the public health services for their use and had been accused of abusing the system.

Koca confirmed 57 deaths in the last 24 hours — the lowest level since March 31 — bringing the country's death toll to 3,641. With 1,977 new cases, Turkey has now confirmed 133,721 incidences of COVID-19, the disease caused by the coronavirus, making it the eighth-hardest hit country in the world. About 3.8 million people have been diagnosed with COVID-19 worldwide.

Koca said on Wednesday the decline means Turks are now ready to begin “controlled socialization,” though he warned that the virus still lurks among the general population, including “at the barber shop or bus stop." He said, "Home remains the safest place against the virus.”

Barber shops and beauty salons as well as shopping centers will be the new front line in the battle to contain the virus after President Recep Tayyip Erdogan said they will be allowed to re-open on Monday. The easing includes a short spell outside one day next week for the elderly and youth under 20, who have been barred from leaving home for more than a month.

While parks and the court system remain closed, the decision to prioritize malls may be due to Turkey’s “distinctive sociocultural behaviors,” Tevfik Ozlu, a medical doctor who is on the government’s coronavirus committee, told independent news outlet Medyascope. Turks also have a tradition of shopping for gifts ahead of the Islamic holiday of Eid al-Fitr, which begins on May 24, he noted.

Other businesses drawing up normalization timetables include the nation’s soccer leagues, which will begin playing on June 12, the Turkish Football Federation said. Flag carrier Turkish Airlines next month will resume 60% of domestic flights and begin flying to 22 destinations in 19 countries, it said in a presentation.

Still, more than 35% of Turks don’t expect to return to normal for three months or more, according to an April survey of 1,288 people by MetroPoll that was published this week.

Despite the misgivings over relaxing social-distancing rules, the MetroPoll survey found that most Turks trust the government, with 62% saying it has been transparent in its communication about the coronavirus. Koca in particular received high marks, with 8.8 points out of a possible 10 for success in fighting the outbreak, compared with Erdogan’s rating of 6.65 points.

Erdogan wants to kick-start the economy as the costs mount from extended physical-distancing measures that have forced some 150,000 businesses to close. Manufacturing last month fell to its lowest level since 2008, according to one measure, and inflation is slowing, despite record weakness in the lira, indicating how much domestic demand has contracted.

Foreign investors have dumped $8 billion in Turkish stocks and bonds this year as the pandemic threw the global economy into a tailspin. Turkey is harder hit than other emerging markets because of worries the central bank’s already low foreign currency reserves have “collapsed,” Tatha Ghose of Commerzbank wrote in a research note. He said reserves have dropped by more than $20 billion to almost $50 billion.

The plunge in reserves, said to stem from the central bank’s effort to prop up the lira while cutting interest rates to comply with Erdogan’s directives, coincides with a sharp fall in exports as demand dries up in Europe, Turkey’s biggest overseas market. The drop in export receipts will complicate repayment of $168 billion of foreign currency debt due over the next year, according to Bloomberg figures.

Before it recovered late in the day, nervous investors pushed the lira more than 1% lower on Thursday, surpassing the record low it plumbed in August 2018, when fears about Erdogan’s foreign and economic policies sparked a currency shock that led to a painful economic slowdown from which Turkey was just emerging when the pandemic hit. The currency has shed 20% of its value this year.

A senior official at the US Federal Reserve poured cold water on Turkey’s prospects of securing a swap line to obtain foreign currency on Wednesday, saying only countries with high credit standards who enjoy “mutual trust” with the United States stand to benefit.

Other countries squeezed by the coronavirus fallout have turned to the International Monetary Fund, but Erdogan has ruled out such a loan. An IMF facility would require adherence to strict macroeconomic guidelines and would impinge on the president’s unfettered control of the economy.

“If the government announced an IMF deal and agreed to accept IMF conditionality, we could imagine that Turkish assets would rally powerfully,” Ghose wrote.

Editor's note: The previous version of this article mistakenly displayed a photo from Iran instead of Turkey.