The Syrian Ministry of Health has registered 121 coronavirus cases and a death toll of four in areas under regime control. 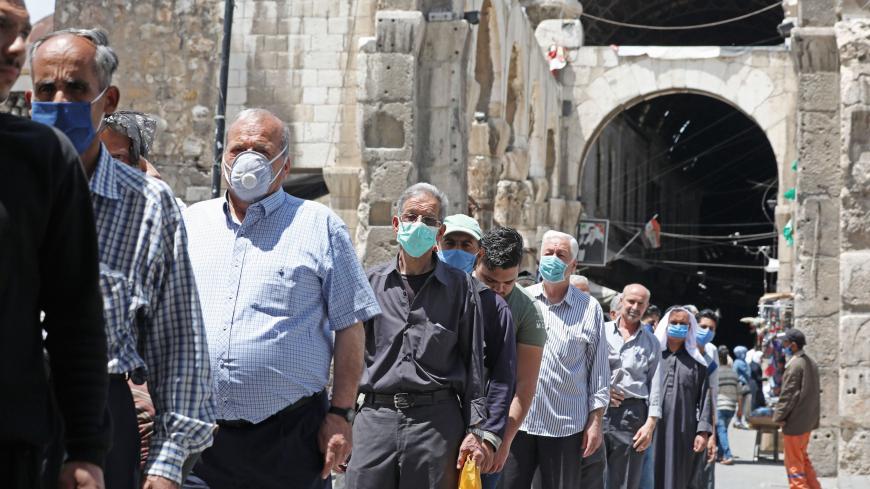 Syrian men wearing face masks line up to enter the Umayyad Mosque in Damascus to attend Friday prayer on May 15, 2020, following the authorities' decision to allow prayers on Fridays in disinfected mosques with strict social distancing and protection measures to limit the spread of the coronavirus. - LOUAI BESHARA/AFP via Getty Images

The Syrian government will do away with the overnight curfew imposed in March despite a surge in reported cases of the coronavirus.

The Syrian Ministry of Health today announced 15 new COVID-19 cases in areas under government control, bringing the total number of cases to 121 and a death toll of four. All of the new cases were among Syrians returning from abroad, including nine from Kuwait. Experts have questioned the regime’s relatively low numbers, but Damascus has denied all charges of a cover-up.

Outside of government-controlled territory, six coronavirus cases, including one death, have been confirmed by officials conducting their own testing in northeast Syria. So far, no cases have been reported in the rebel-held northwest, where testing is extremely limited.

President Bashar al-Assad’s government is trying to ease the pain coronavirus restrictions have inflicted on the economy, already under strain from Western sanctions and nine years of war. The Syrian pound fell to a record low earlier this month.

Beginning today, the government will lift an overnight curfew and allow movement between its provinces. Shops are permitted to stay open from 8 a.m. to 7 p.m., the Syrian state news agency SANA reported. Public parks, cafes, restaurants, swimming pools, theaters and gyms are to remain closed until further notice.

Aid organizations warn that if the virus spreads more widely, Syria's fragile health infrastructure will be unable to cope. Tens of thousands of doctors have fled the country and more than half of its hospitals were damaged or destroyed in Russian and government airstrikes.

Civilians living in the northwest province of Idlib remain especially vulnerable to an outbreak. A government offensive on the opposition enclave has displaced more than 1 million from their homes since December. Many are living in overcrowded camps and unofficial settlements where social distancing is impossible to enforce.

Concerns are also mounting over the threat of an outbreak in northeast Syria where the Kurdish-led semi-autonomous administration runs a number of heavily populated displacement camps. Particularly worrisome is al-Hol camp in Hasakah province, which houses 70,000 displaced people, including Islamic States members and their families.