The middle class in cash-strapped Lebanon is having a hard time making ends meet as salaries have been slashed and banks are imposing informal capital control, all compounded by the coronavirus-induced lockdown measures. 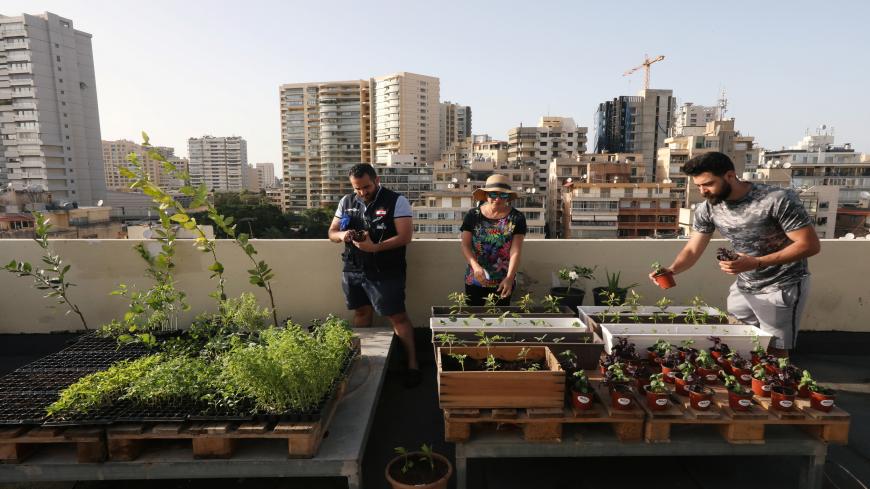 People work on plants on a rooftop of a building, as many Lebanese turn to grow vegetables and fruits at home as the coronavirus pandemic hammers the collapsing economy and food costs soar to new heights, Beirut, Lebanon, May 17, 2020. - REUTERS/Mohamed Azakir

Marwan, a former banker living in Keserwan north of Beirut with his wife and two children, once believed that he and his wife’s combined income would be enough to guarantee a life for his family in Lebanon.

“We were living a normal life,” Marwan, who asked that only his first name be used, told Al-Monitor. “We had two jobs, we had stability. We considered that this stability supported our lives and supported our future. But now for the first time I feel that I'm mentally tired, my family is tired, and there is no future.”

Marwan left his job in the banking sector in 2016 because he felt his salary was not enough to sustain his family, and after his business venture was stymied by Lebanon’s financial crisis, his family has been left to rely primarily on his wife’s income as a schoolteacher. But now half her salary has been cut over the last several months, and Marwan said he is afraid she might lose her job altogether.

For people like Marwan who are part of Lebanon’s fragile and already strained middle class, the country’s compounding economic and monetary crises, exacerbated by the pandemic, have caused dramatic changes in their standards of living and financial stability, pushing many middle-income earners toward poverty. Skyrocketing prices, salary cuts and the looming risk of job losses have necessitated a fundamental readjustment in the lifestyles and spending habits of middle-class Lebanese, who have in some cases felt the relative impact of the recent crisis more acutely than even Lebanon’s poor, according to some analysts.

“The middle class is something like 14%, it’s not very big,” Dan Azzi, a Lebanese analyst and former advanced leadership fellow at Harvard, told Al-Monitor. “At the old prices, anyone below the top 15% effectively was having a very, very hard time anyhow.”

As Lebanon has descended into a likely recession this year according to the World Bank, studies by Lebanese research company InfoPro have estimated that around 220,000 people lost their jobs between October 2019 and the end of January, while half of the companies surveyed reported salary cuts of over 40%. Spurred on by the economic downturn, dollar shortages, a debt default and the effects of the coronavirus-induced national lockdown, the Lebanese pound lost around 60% of its value by May, wreaking further havoc on wages and savings in the country. This economic storm has resulted in a scenario where the Lebanese are paying higher prices for basic goods while their salaries and job prospects have dwindled.

In addition, beginning in November of last year, Lebanese banks have put withdrawal limits into force to guard against a flight of dollars from depositors’ accounts, restricting people’s access to their own funds: capital control.

According to Adib Nehme, former regional adviser for sustainable development at the United Nations Economic and Social Commission for Western Asia, the relative impact of the crisis was more strongly felt by the middle class, and especially its lower tier, than even by those living in poverty.

In a November 2019 press release, the World Bank warned that up to 50% of Lebanon could soon fall below the poverty line, up from about a third at the time.

Carl Freiha, a registered nurse working in Beirut who Al-Monitor spoke with earlier this month, is among those in the middle class who have been hit particularly hard by the economic situation, especially because he is supporting his family with his income.

“I’m a nurse, so I should be OK financially,” Freiha said. “But I swear, sometimes I sleep without eating even. I’m not even exaggerating. I work and get half my salary, and even if I took my whole salary, it’s not enough now.”

Nader, an employee at a mobile tech company in Beirut who asked for his last name not to be disclosed, told Al-Monitor that although he is still able to put food on the table, he too is struggling. “We are considered middle class, but we are not middle class,” said Nader, who is the primary breadwinner in his household now that his father is only able to find work intermittently. “We are being crushed.”

Following the coronavirus outbreak in Lebanon, his monthly salary, which at times amounted to over $1,000 with bonuses, was cut down to $600, leading to changes in his diet and lifestyle. “I used to buy meat three times a week. Now I buy meat every two weeks,” he said. “We are becoming vegetarians, and vegans even.”

Sara Daouk, a human resources professional in Beirut and mother of two children, said that she has had to reprioritize her spending to make sure she has enough money for basic necessities, but she has had to use some of her savings to make ends meet.

“Currently we are using our savings and we are barely taking from the banks because they are not allowing us to remove our dollars,” Daouk, who received her March salary from her company a month late, told Al-Monitor. “I don’t know how much time we can still hold on.”

Raghid Awdeh, a university student from the Chouf region of the Mount Lebanon governorate, noted that salaries are not the only things losing value. He is relying on his father’s retirement pension from his time in the military establishment to fund his education. He told Al-Monitor that his family has recently begun using their land to grow their own food to save money.

According to Nehme, the degradation of the Lebanese middle class quickened significantly in 2019, but began in 2018 when young couples started having difficulties getting loans to purchase homes in Lebanon’s crisis-shaken real estate market.

For Manal Moukaddem, a student from Tripoli who is currently spending the coronavirus lockdown with her fiance in nearby Anfeh in north Lebanon, a major worry is how the two of them will find a future amid the current conditions. “My concern is trying to build a life here together,” she told Al-Monitor. “How will we buy basic house appliances at these prices?”

Moukaddem said that she increasingly sees leaving Lebanon as her only option, which might force her to pursue a long-distance relationship with her fiance for a period of time. “It feels less like a choice and more like a necessity for survival,” she said.

Nehme stated that one of the most significant large-scale changes in the recent behavior of the Lebanese middle class is the shift from reliance on the private sector to the public sector, pointing to families’ inability to continue to afford private schools as one example. Daouk told Al-Monitor that in the private school her cousin is attending, parents have already stopped paying tuition fees.

According to Azzi, another likely shift will be one away from imported products, which have become particularly expensive, toward local goods. He added that in his view, a silver lining of the crisis will be that jobs currently occupied by foreign workers may open up to the Lebanese over the next few years.

Yet for Marwan the damage may already be done. He recounted that after getting a chance to leave the country to go to France in 2002, he ultimately decided to stay in Lebanon. Now, he is afraid he made the wrong choice.

“I had hope in this country,” he said. “But for the first time I feel cheated.”