Netanyahu leaves annexation on back burner in talks with Pompeo

Prime Minister Benjamin Netanyahu made no mention of annexation in his press conference with Secretary of State Mike Pompeo, focusing instead on the pandemic, the US peace plan and Iran. 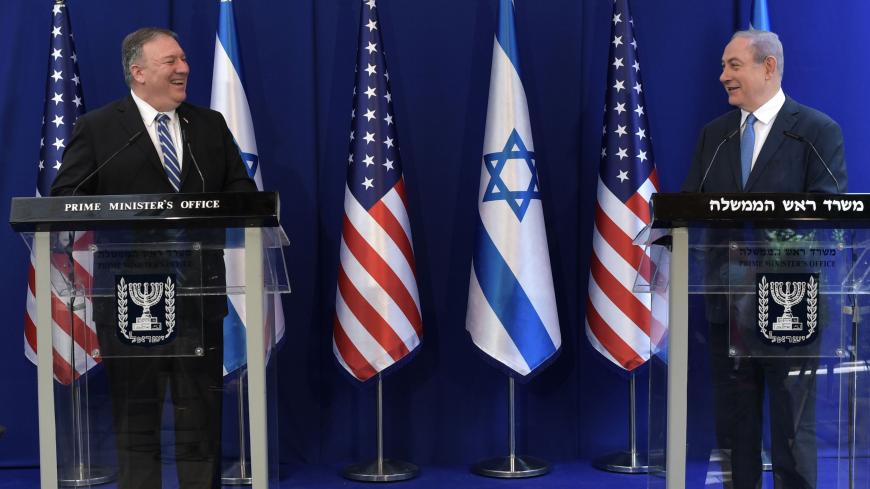 Prime Minister Benjamin Netanyahu and Secretary of State Mike Pompeo wrapped up a three-hour meeting in Jerusalem this morning, the day before the swearing-in of Israel’s new government. Greeting Pompeo upon his arrival, Netanyahu set the tone by introducing three main topics on the agenda: the global battle against the novel coronavirus, the Iranian threat and President Donald Trump’s proposed peace plan.

"The first thing is the plague. … The second thing is that there’s something else plaguing our region, which is unremitting Iranian aggression and terror. … The third point is that now we’re about to form a national unity government, tomorrow, I am — I think that this is an opportunity to promote peace and security based on the understandings that I reached with President Trump in my last visit in Washington, in January," said Netanyahu.

Pompeo responded, "We’ll get a chance, too, to talk about the Vision for Peace. We’re now some months on from the day that you came to Washington when President Trump announced that Vision for Peace when you were there. There remains work yet to do, and we need to make progress on that."

Neither Netanyahu nor Pompeo mentioned Israel's West Bank annexation plans at the press conference. In a May 12 interview with the right-wing Israel Hayom newspaper, Pompeo refused to say outright whether Israel was being given the nod on West Bank annexation or being told to hold off. The secretary of state insisted, "This is a decision that the Israelis will make. I want to understand how the new leadership, the soon-to-be new government, is thinking about that." Pompeo said that the issue would surely come up in his meetings in Jerusalem.

Pompeo’s refusal to openly endorse the annexation plan was surely the reason Netanyahu did not mention the issue when speaking to the press. The Israeli prime minister needs American support for the launching of his new government. Insisting annexation now would serve nothing, as Netanyahu can in any case bring such a proposal for a vote no earlier than July 1, as the April 20 unity deal with Blue and White stipulates.

Netanyahu clearly feels that he need not insist on the annexation issue at each opportunity. Three weeks ago the prime minister expressed his confidence that the Trump administration would support his annexation plan, and his associates say that little has changed since. On April 27, Netanyahu stated, “President Trump pledged to recognize Israeli sovereignty over the Jewish communities [in the West Bank] and in the Jordan Valley. A couple of months from now, I am confident that that pledge will be honored."

But with or without annexation, his meeting with Pompeo offered Netanyahu an excellent photo op and brought back to the agenda the security issue of Iran and its entrenchment in Syria. It also brought up an issue less comfortable for Netanyahu: American objection to Chinese investment in strategic infrastructure. Pompeo acknowledged these concerns, stating, "You’re a great partner, you share information, unlike other countries that obfuscate and try to hide that information — and we’ll talk about that country, too.” Israel announced yesterday it intends to reconsider Chinese participation in the tender for a large desalination plant in the south of the country. Evidently, that statement did not appease the Americans.