Israel’s government publishes a proposal for a law with a sunset date of three months that would enable the Shin Bet to track where the mobile phones of coronavirus carriers have been. 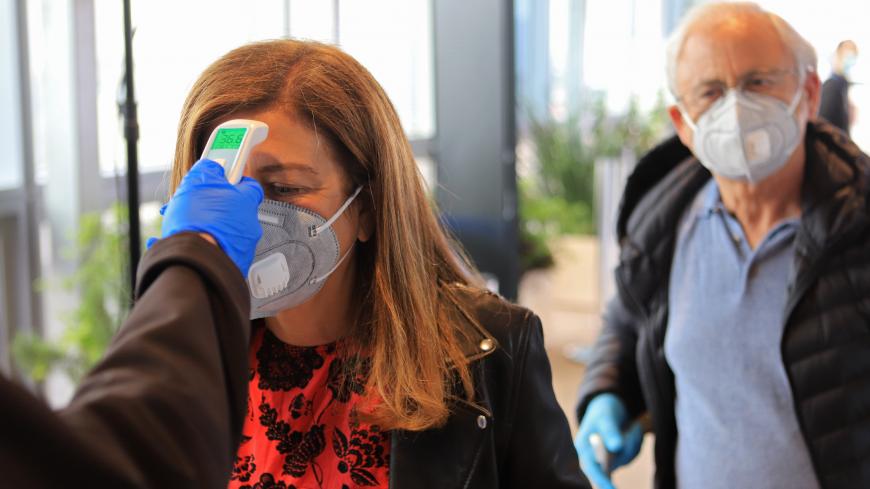 A passenger has her temperature checked before being allowed entry to Ben Gurion Airport on May 14, 2020, near Tel Aviv, Israel. - David Silverman/Getty Images

Israel’s government published a proposal May 19 for a law that would allow the Shin Bet to monitor coronavirus carriers' cellphones. If adopted, the Shin Bet would be legally authorized, for a limited period of three months, to use mobile phone tracking to identify people who were in contact with those infected by the coronavirus.

The Shin Bet started tracking COVID-19 carriers in March, when Israel was first confronted with the novel virus. Several human right bodies and Knesset legislators objected, saying this violated people's right to privacy. But Prime Minister Benjamin Netanyahu, who also heads the Shin Bet, decided at the time to circumvent the parliament by using emergency regulations. Thus, the agency tapped into cellular data to retrace the movements of people infected by the coronavirus.

The Shin Bet already was using these same technologies and means in its efforts to thwart terror acts. The emergency regulation approved by the Cabinet stipulated clearly that the corona-related data gathered by the Shin Bet should only be used by health authorities.

Human rights groups then petitioned the High Court to nullify the authorization.

On April 26, the High Court ruled that the government could no longer authorize the tracking through emergency regulations. While the court expressed its understanding of the unusual circumstances involved, it also cited grave dangers to privacy. The government was given until the end of the month to start legislating a law that would enable the Shin Bet to carry on with the phone monitoring. The government started debating the possibility of initiating such a law, with Prime Minister Netanyahu finally giving the go-ahead for a bill in mid-May.

The May 19 bill refers to latest developments in Israel in terms of the coronavirus spread and government restrictions. Its authors say that while the number of people infected has decreased drastically, the easing of restrictions actually highlights the need for the new law. With people authorized to circulate almost normally, and with beaches and synagogues reopening May 20, Israelis generally would have greater exposure to the virus. While tracking people who were in contact with coronavirus carriers was relatively simple during the lockdown, the same task is now becoming much more complicated.

The authors of the new law stressed that it would be implemented by government declaration and for a three-month period. The government would need to renew its declaration of a pandemic period in order to renew the implementation of the law for another three months. The government would also appoint a special ministerial committee to control Shin Bet operations on coronavirus tracking and the handling of the data retrieved. The bill stipulates that any misuse of the data would be considered a criminal offense.

The High Court emphasized in its April 26 ruling that the government should not speed through the legislation process, thus enabling the public and civil society groups to properly express their reservations. Ironically, this essentially gives the government several more weeks to use the Shin Bet tracking under the special emergency regulations.