Awaiting Cabinet approval, the Shin Bet plans to implement digital counterterrorism technology to fight the spread of the novel coronavirus. 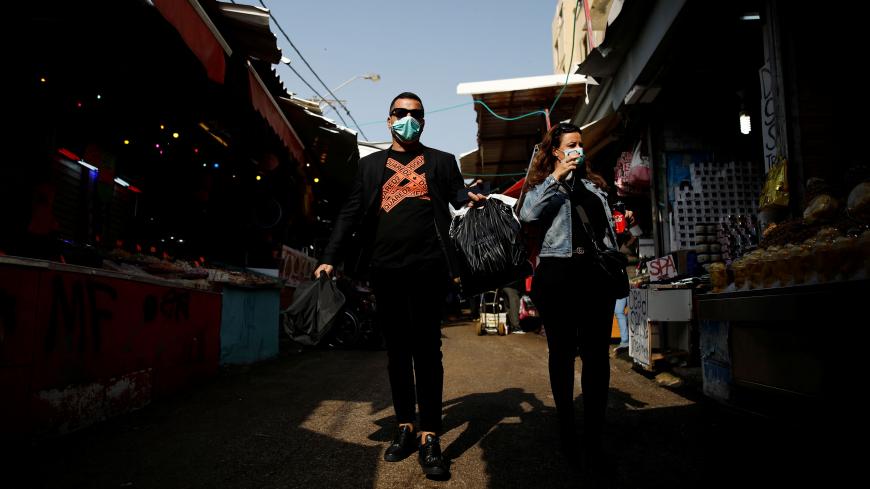 People wearing masks shop at a food market ahead of a planned closure of malls, hotels, restaurants and theaters in an escalation of precautionary measures against the coronavirus, in Tel Aviv, Israel, March 15, 2020. - REUTERS/Corinna Kern

Israel’s government approved on March 15 emergency regulations that would enable the Shin Bet to perform mass surveillance of phones belonging to Israelis who contracted COVID-19. These measures are not designed to monitor quarantined people but to retroactively track the movements of those found to be carriers of the novel coronavirus in order to see with whom they interacted in the 14 days before they were diagnosed. Subsequently, people who were in contact with persons diagnosed with COVID-19 will receive SMS messages instructing them to enter home quarantine.

Prime Minister Benjamin Netanyahu announced the use of these digital counterterrorism measures in the framework of several drastic steps to be taken immediately in order to curb the spread of the virus that causes COVID-19. Speaking at a press conference on March 14, Netanyahu announced the partial shutdown of the country’s economy and public transportation. He also acknowledged that the digital measures to be used might interfere with people’s privacy, but he argued that Taiwan successfully used similar means in order to stop the spread of the coronavirus. Government officials stressed that Netanyahu received authorization from the government’s legal adviser to use these tools after receiving a request on the matter from seniors in Israel’s health system.

The cyber-tech measures decided on by the government will require final approval from the Knesset’s subcommittee on clandestine services before it can be put into action. But public criticism against the intention of the government to monitor people infected with the coronavirus, including warnings issued by human rights groups, ended up by authorities limiting these measures to 30 days only. In addition, the data collected from the phones will be transferred to health authorities only under the supervision of a judge and will be destroyed afterward. Any misuse of the data would be considered a criminal offense.

Former Justice Minister Ayelet Shaked sided with these measures, saying, "Technologically tracking coronavirus patients is an extreme step and severely harms privacy, but it may save people's lives."

According to the latest updates, the number of people in Israel with the coronavirus has risen to 250, but the Health Ministry estimates that there are hundreds, possibly thousands of undiagnosed cases. Netanyahu himself was tested on March 15. He has not contracted the virus.