Coronavirus leading Israel into a Passover like no other

With Passover approaching, the Israeli government appears set to implement extraordinary measures to try to keep the novel coronavirus from spreading beyond control as families gather for the holiday. 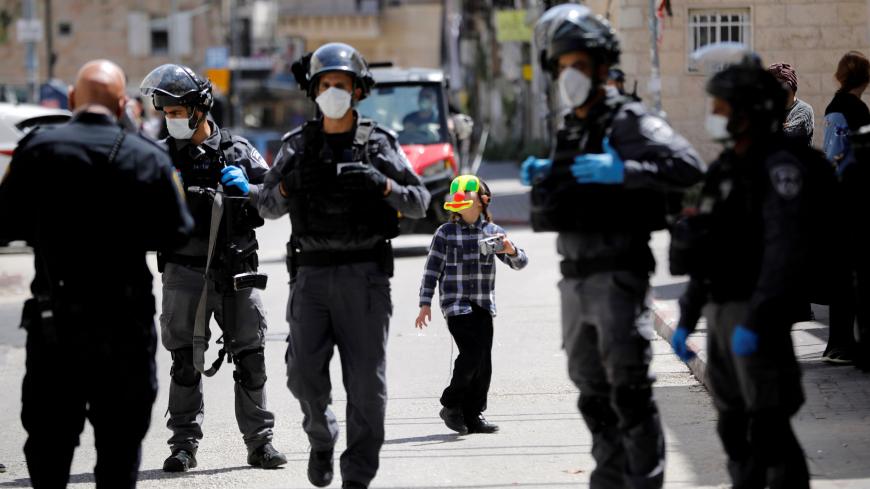 A boy wearing a clown mask passes behind a patrol enforcing government restrictions on movement to curb the spread of the coronavirus disease, Mea Shearim, Jerusalem, April 6, 2020. - REUTERS/Ronen Zvulun

Against the backdrop of a sharp increase in the number of novel coronavirus cases in Israel, the country appears to be on its way to a nationwide lockdown as it prepares for Passover, which begins Wednesday evening, April 8. The death toll in Israel from COVID-19 hit 55 at noon on April 6.

Authorities have begun implementing measures to limit movement beginning Wednesday and probably throughout the week of Passover. Decisions by Cabinet ministers in the framework of emergency regulations could see police and army patrolling roads and junctions to deter unnecessary travel.

The government decided to tighten restrictions on citizens during a late-night conference call on April 5. Authorities fear that the traditional Passover evening dinner, celebrated among extended family members, could greatly accelerate the spread of the virus, possibly to the point of losing control over attempts to curb it.

Over the past few days, Israelis have been instructed to limit the Passover evening meal to small groups, meaning the nuclear family only. Concerned that many won’t respect the directive, the government decided to notch up surveillance. Drones, helicopters and thousands of police officers will be deployed across the country beginning Wednesday evening to guarantee a full closure, keeping vehicles off the streets and roads and blocking entry to towns and villages. Anyone caught violating the restrictions will be heavily fined.

The government also authorized a series of additional unprecedented moves to thwart the spread of the coronavirus, including the immediate partial lockdown of eight cities and some 15 Jerusalem neighborhoods. The announced locations—primarily populated by the ultra-Orthodox and suffering high rates of infection—are now under military control. The town of Bnei Brak, home to Israel’s largest ultra-Orthodox community, was put under lockdown last week.

According to health care experts, these strict measures should enable the government to better control and curb the spread of the virus. Meanwhile, however, economists and some decision makers have criticized Prime Minister Benjamin Netanyahu for shuttering the labor market by ordering people to stay at home for almost three weeks now, at the price of deeply damaging the country’s economy. These experts accuse Netanyahu of choosing the option of shutting down the country to cover up for the lack of sufficient corona test kits and protective equipment for health care professionals.

Last week, a group of 13 professors, scientists and doctors sent Netanyahu a petition arguing against a policy of closure, asserting that there should be a better balance between corona restrictions and protecting Israel's economy. They say that the current situation will lead to a significant rise in unemployment and poverty, an increase in mental health issues and actually increase the number of deaths. Because of the potential harm to the society, they say, after Passover the government should slowly lift restrictions on the labor market. The petitioners fear that the spike in unemployment and poverty and the policy of social distancing will result in more damage than good.

Criticism has also been voiced over the government’s use of emergency regulations at the expense of democracy and the right to privacy, especially the monitoring of movement by tracking mobile phones.

Senior cabinet members told Al-Monitor that the partial lockdown could continue as long as two weeks after the Passover holiday, as precaution against a wave of infection during the Passover festivities.

Will only Arab party in Israel’s ruling coalition provide blueprint for others?