The new Netanyahu-Gantz unity government, which was sworn in May 17, is already facing controversy over Prime Minister Netanyahu's focus on rushing annexation of parts of the West Bank. 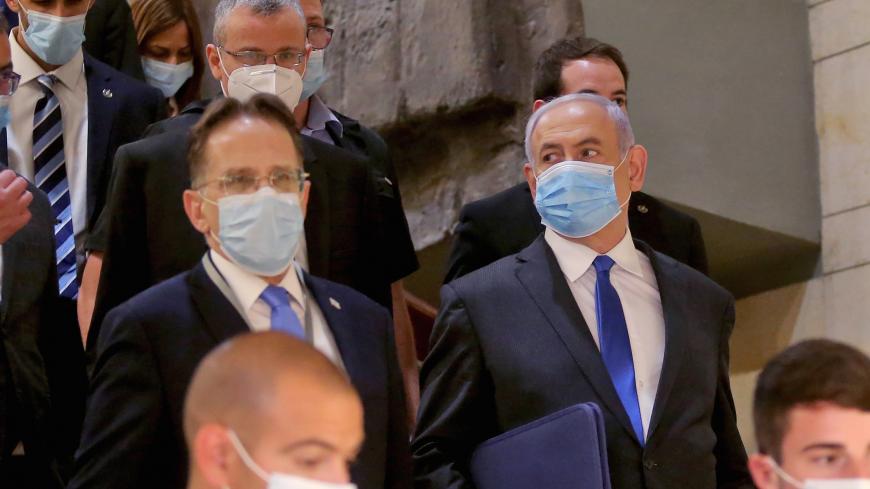 Israel’s 35th government, which was sworn in May 17, is also Prime Minister Benjamin Netanyahu’s fifth government. Officially, it is known as a national unity government, with Benny Gantz of the Blue and White party poised to step in as prime minister in 18 months. Gantz has, in fact, already been sworn in with Netanyahu, in his capacity as “alternate prime minister.” Nevertheless, the one person who will mark this new government’s course, set its tone and determine its agenda will for the most part be Netanyahu.

In his inaugural address, Netanyahu laid out his political vision for this new government. To no one’s surprise, it seemed to reflect his personal vision as leader of the ideological right. It will be a government committed to the annexation of large parts of the West Bank.

"The time has come to apply sovereignty to Jewish communities in Judea and Samaria. This won't distance peace, it will bring it closer," he declared, using the Israeli term for the West Bank. He continued, "The truth is — and everybody knows it — that the hundreds of thousands of settlers living in Judea and Samaria will remain there, no matter what arrangement is reached. The only reason the whole issue of sovereignty is on the agenda is because I promoted it personally for the last three years, both overtly and covertly."

Never before has a prime minister from the right used his inauguration address to announce his intent to annex West Bank settlements. Netanyahu is well aware of the fact that the window of opportunity to impose Israeli sovereignty in the West Bank will only remain open as long as Donald Trump is president of the United States. He is therefore planning to pour everything into advancing this one agenda item over the next few months, before the next presidential election in the United States this November.

As of now, two clocks are ticking for Netanyahu. The first is the political clock, which obligates him to hand over the office of prime minister to Gantz on Nov. 17, 2021. The second is the legal clock, which will begin ticking next week, on May 24, when his trial for bribery begins in the Jerusalem District Court. This will be the start of a yearslong saga, in which Netanyahu will be forced to operate under the shadow of his trial. At that point, all the testimonies, accusations and legal arguments will be out in the open. Since this could erode his public stature, he will have to act quickly.

It was almost impossible not to notice how Netanyahu took advantage of his speech to begin to lay out his legacy. Now 70, and after a total of 14 years as prime minister, Netanyahu declared that his meta-objective is to impose Israeli sovereignty over lands of the West Bank. It is his life project and the one big act of leadership that he wants credited to him. He wants to be the one to determine Israel’s borders for generations to come.

The question is whether his new partner will cooperate in such a volatile move, given how controversial it will be, especially among the international community. Would Gantz participate in such a step, if it would put Israel’s peace with Jordan at risk, as King Abdullah made perfectly clear over the last few days?

In his speech, which followed Netanyahu's, Gantz preferred to ignore this call for annexation. After all, it tested his position as leader of the center-left camp. Instead, he tried to lend a festive air to the swearing-in of the new government, after such a difficult birth. He was already facing widespread discontent over the new government’s size. With a total of 34 ministers, the Gantz-Netanyahu government now bears the questionable title of the biggest government in Israel’s entire history. It will require vast amounts of funding just to function, even as Israel is reeling from a major economic crisis brought on by the coronavirus pandemic.

“This building has lost the trust of its citizens,” the new leader of the opposition, Yesh Atid leader and Knesset member Yair Lapid, responded in an attack on the new Netanyahu-Gantz coalition. To his former partner from the Blue and White party he said, “Today, you are taking an oath of allegiance to a man who is about to stand trial for bribery next week.”

Despite justifiable criticism of the government’s wastefulness, the new coalition did put an end to the worst political crisis in Israel’s history. It was a crisis that lasted 508 days and involved three heated elections, which ended in a stalemate. Polls conducted since the last election show clearly that Israelis want a unity government. The trend only intensified since the coronavirus outbreak.

It was Gantz who made the really tough decision to abandon his promise not to sit in a Netanyahu government as long as the prime minister is under indictment for bribery. In doing so, he broke the endless cycle of elections, even if it meant the breakup of the Blue and White party, which offered the only viable alternative to form a government.

Even after he made that decision, he still had a long way to go before a government was formed. Negotiations lasted many long weeks, and on more than one occasion Gantz felt that Netanyahu was just taking him for a ride. But in the end, Netanyahu did sign on to a unity government based on a rotation agreement. Despite the overwhelming consensus of opinion to the contrary, he was willing to set the date for when he would leave office as Israel’s longest serving prime minister. Netanyahu’s fifth government will serve for the next year and a half, and then it will be replaced by the first Gantz government. At that time, Netanyahu will become “alternate prime minister,” and remain a full partner in running the country.

As the list of ministers was slowly revealed over the course of the day, Israelis found that their new government is unusually diverse. It includes two former chiefs of staff, who served under Netanyahu. Gantz already served as minister of defense, while Gabi Ashkenazi is the newly appointed minister of foreign affairs. They will also be part of the security Cabinet, which will distinguish it from the last government, in which Netanyahu held the unchallenged role of “Mr. Security.” In fact, he was almost the only experienced member of that security Cabinet with a proven record in security affairs.

Another positive change in the current government is the number of women now serving as ministers. This government will have eight women, including two who will also be part of the security Cabinet: Miri Regev of the Likud, who will replace Ashkenazi as foreign minister in a year and a half, and Orit Farkash HaCohen of Blue and White, who received the strategic affairs portfolio. Also, for the first time in Israel’s history, the Cabinet will include an ultra-Orthodox woman, Minister of Diaspora Affairs Omer Yankelevich, also from the Blue and White party. Another woman from Blue and White to make history is the new minister of immigrant absorption, Pnina Tamano-Shata, who is the first Ethiopian woman to serve in the Cabinet. Also to the new government’s credit is the inclusion of two openly gay ministers with children. These are Minister of Internal Security Amir Ohana of the Likud and Minister of Welfare Itzik Shmuli from the Labor Party. This should not be taken for granted, especially since the coalition includes two ultra-Orthodox parties.

Will the new government survive? Most pundits believe that it will be short-lived. On the other hand, its size and the number of positions, as well as the fact that none of its leaders want a new round of elections, could actually make for a stable government after all.