The national-unity government of Prime Minister Benjamin Netanyahu and Blue and White leader Benny Gantz has not been established yet, but already suffers from obstacles. 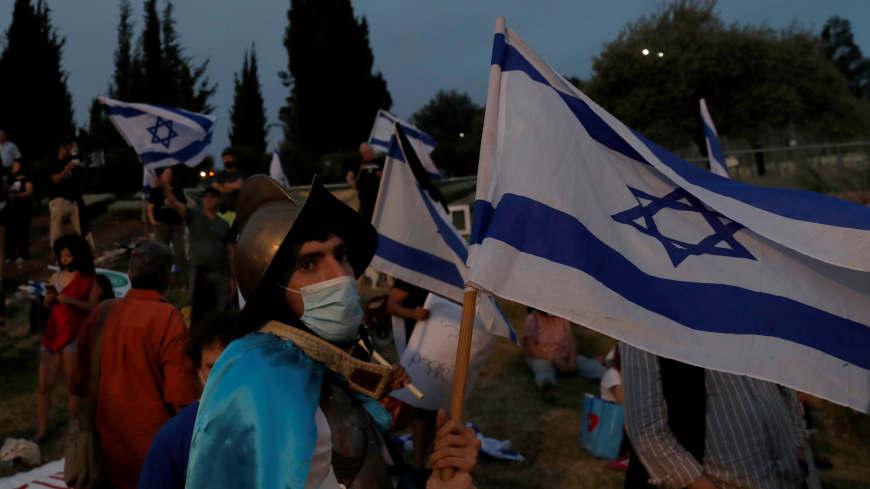 A protester waves a flag during a demonstration against Israeli Prime Minister Benjamin Netanyahu's new unity government with Benny Gantz, outside the Knesset, in Jerusalem, May 14, 2020. The swearing-in of the new government was postponed until May 17. - REUTERS/Ronen Zvulun

Just half an hour before he was slated to swear in his fifth government on May 14, Prime Minister Benjamin Netanyahu surprised everyone by announcing that he was putting the ceremony on hold. In doing so, he placed the entire Israeli political system into yet another state of uncertainty.

While the swearing-in ceremony was only postponed until May 17, this strange development not only impinged on the festive mood that comes with the occasion but also raised fears in the Blue and White party that Netanyahu has decided to rip the whole agreement up at the very last moment. Was Netanyahu signaling that he would prefer a fourth round of elections instead?

This certainly wasn’t what Blue and White party leader Benny Gantz had hoped to see as the start of a new government, certainly not after so many weeks of exhausting coalition negotiations with Netanyahu, not to mention all the major concessions Gantz had made.

Netanyahu did call to explain that he hadn’t finished doling out all the Cabinet portfolios and other important jobs to the members of his Likud party, and that he needed a little more time. Surprised by this, Gantz demanded that the new government be sworn in anyway, even if it happens in the middle of the night. But Netanyahu made it clear to Gantz that this would be impossible, at least as far as the prime minister was concerned.

In response, Gantz said he was withdrawing his resignation as speaker of the Knesset. That way he would still have a bargaining chip in any future dealings with Netanyahu, especially if it turns out that the prime minister is reneging on his agreement to form a unity government.

The drama in the Knesset began in the afternoon, when Netanyahu had some difficulties divvying up ministries among senior Likud members. Some, including several who were left with no job at all, grumbled bitterly that they would boycott the swearing-in ceremony. According to current plans, the new Cabinet will consist of 34 ministers, earning it the dubious title of Israel’s most wasteful government ever. To make matters worse, this is happening while the coronavirus ravaging Israel leaves the country facing the most serious economic crisis in all its history.

While half the ministries were given to the Blue and White party, the other half were reserved for the right-wing bloc as a whole. This resulted in a dire shortage of positions for Likud loyalists.

Gantz already met with the members of his own party to distribute the various ministerial portfolios and committees among them. In contrast, Netanyahu was forced to reject the demands of senior Likud Knesset members who considered themselves candidates for top positions. In other words, Gantz had plenty of jobs to hand out, and green young Knesset members of the Blue and White party were suddenly informed that they would serve in Cabinet positions in the new government. Among the happy recipients of this promotion was Pnina Tamano Shata, who will be the new minister of immigration and absorption. At just 36 years old, she will be the first Ethiopian woman to serve in a Cabinet position in Israel.

But Netanyahu was too busy with Secretary of State Mike Pompeo’s visit to Israel on May 13 to focus on doling out portfolios. This left top Likud ministers wandering about in a state of uncertainty. Netanyahu was ignoring them, and it wasn’t even certain that they would be given a Cabinet portfolio at all. For example, Regional Cooperation Minister Tzachi Hanegbi has long been a staunch Netanyahu loyalist. But he was so furious that he hadn’t even been called for a meeting with the prime minister that Hanegbi announced in the media that he has no plans to participate in the swearing-in ceremony. Deputy Defense Minister Avi Dichter, a former head of the Shin Bet, did the same. And all of this was happening while the Knesset was completing the final preparations for the swearing-in ceremony.

At this point, Netanyahu apparently realized that he would not have time to resolve all the personal crises plaguing his party, so he decided to postpone the swearing-in ceremony.

As if the chaos in the Likud wasn’t enough for Netanyahu, all of this coincided with the final breakdown of coalition negotiations between Netanyahu and the right-wing Yamina party. It all ended with a bang when the party’s leaders said Netanyahu’s offer was humiliating. The party’s chairman, Defense Minister Naftali Bennett, then called a press conference to announce that it would be joining the opposition.

The confluence of all these bizarre events gave the launch of Israel’s 35th government the look and feel of a Turkish bazaar. And it was happening to a self-proclaimed “reconciliation government,” intended to heal society’s wounds after three contentious elections.

While this is not the first time that ministerial appointments have been delayed until a new government is actually sworn in, there is no precedent for such an arbitrary postponement of the swearing-in ceremony. But what really sticks out in all this is the obvious misgivings and lack of trust between the two men, Gantz and Netanyahu, who are supposed to lead Israel for the next four years.

Their partnership is already getting off on the wrong foot. If Gantz really trusted Netanyahu, he would not have been in such a hurry to withdraw his resignation as Knesset speaker. The problem is that the relationship between the Blue and White party chairman and the prime minister is currently being maintained through guarantors and legal agreements.

But will all this really happen? Based on the most recent events surrounding this unity government, Netanyahu will be suspected for the next 18 months of trying to find some way to break up his partnership with Gantz at the very last minute in order to prevent him from taking over as prime minister.

Netanyahu is a super-politician par excellence. He spent the last year and a half proving that he knows how to extricate himself from the most impossible situations. He is a survivor who has no qualms about eliminating his political rivals so that he can remain prime minister, even though he has already been indicted for bribery. In contrast, Gantz is a political novice in every sense of the term. He will have a hard time fighting back against Netanyahu, especially when Netanyahu has the home-court advantage. If Gantz learned anything over the last few weeks, negotiating with Netanyahu, it is that the prime minister is sophisticated, creative and even politically cruel. This realization hardly fostered a sense of trust in the man. Gantz knows now whom he is up against.

The really important question is how the two men will run the government, especially since Gantz has so little trust in Netanyahu. Before he knows it, the state budget will be brought before the Knesset for its approval. At the same time, Netanyahu is expected to advance his annexation plan for the Jordan Valley and West Bank settlements, despite the opposition of several Blue and White members. These points of friction will accompany this new government from day one. The problem is that the government’s very existence will depend on Gantz’s ability to foster a sense of trust and common vision with Netanyahu. That is sorely lacking right now.